This is a reprint of the letter from the editor in Unwinnable Weekly Issue Fifty. You can buy Issue Fifty individually now, or purchase a one-month subscription to make sure you never miss an issue!

This week, I am excited to announce that we have teamed up with Epic’s Unreal Engine 4 to bring you Revving the Engine, a monthly series profiling the recipients of Unreal Dev Grants. The first is Mike Blackney, the man behind Dead Static Drive, a game he describes as “Grand Theft Cthulhu.”

Before you dive into that, though, I want to talk a bit about what we hope to accomplish with this project, as well as say some things about advertorials.

Advertorials suck. In my experience, the vast majority of what we currently file under the buzzword “native advertising” is boring dreck produced to please the agenda of the company that holds the purse strings, not the reader. I certainly don’t want to read that stuff, let alone write it.

I did freelance advertorial work for a year. It was the worst.

So the riddle is, how do you produce stories paid for by a sponsor that are thoughtful, engaging and don’t send your readers running for the hills at the mention of the word “sponsored?”

Earlier this year, the folks at Epic rolled out the Unreal Dev Grant program, a fund of $5,000,000 funding grants to developers working with Unreal Engine 4. The grants range from $5,000 to $50,000 and come with absolutely no strings attached.

The best part of the UDG program is that the majority of grants so far have gone to small or one-person development teams building games that are weird, beautiful, strange and experimental. They defy the muscle-bound expectations many have when they hear about a game being developed in Unreal (see: Gears of War, Arkham Knight). That’s a good thing, for both developers and players.

These are the kinds of games I am most interested in lately. In the case of Mike Blackney, for instance, I’ve wanted to interview him since I first peeped a video of Dead Static Drive back in March. There is no difference between the interview I would have conducted independently and the one that appears in this issue.

That’s the other thing you need to know about this deal. Aside from Epic putting us in touch with people and checking the occasional arcane engine factoid, they are entirely hands off. No editorial control, no sign-offs, no approvals.

What I hope I am conveying is that, while these are sponsored stories, they are worth reading. They’re about games and developers worth learning about, that, despite Epic’s support, still run the risk of being overlooked. I hope you check them out. 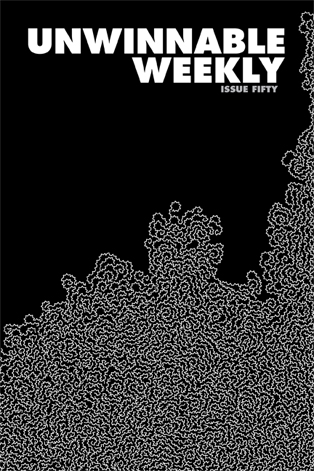 A huge thank you to Dana Cowley over at Epic for being instrumental in making this happen. Like the recipients of Unreal Dev Grants, Unwinnable is a small team trying to make cool things and this sponsorship is sure to help us keep doing that.

And, of course, if you have thoughts on how we can be better, or if you’d like to sponsor Unwinnable, or if you’d just like to say hi, you can e-mail me at
stuhorvath@unwinnable.com.

That’s not all we have this week. We’re proud to be a part of the Summer Videogame StoryBundle. Our entry, Put This In Your Brain is a collection of the best games writing from the first six months of Unwinnable Weekly, with an amazing cover by Dina Abou Karam (see the ad on our homepage) and an introduction by Gerard Way of My Chemical Romance/Umbrella Academy fame.

The minimum price is an astoundingly low three bucks for the main books and $12 for everything – 22 books total. Other books in the bundle include How Videogames Are Made, by Russ Pitts; Kill Screen Issue 8: Virtual Reality; Boss Fight Books: Bible Adventures, by Gabe Durham and more.

And you can choose to donate a portion of your purchase price to Pixelles, a non-profit initiative committed to helping more women make and change games.

Huge thanks to Simon Carless for including us in his curation and to Jason Chen of StoryBundle for continuing to support great games writing!

In addition to my interview with Mike Blackney, we have some other great stories this week. Brian Crimmins returns to the PSX horror game D to probe its mansion and its psychology. Game developer Ian Snyder shares the early stages of his new interactive toy, which creates beautiful images based on Lichtenberg figures. Finally, David Wolinsky and I try to get over our respective post-E3 hangovers.

Kickstarter backers – you only have two issues after this, then your subscription runs out. We’re doing a special summer rate for subscriptions – $2 for the first month, $7.99 every month thereafter. Be sure to take advantage of that!

That’s all for this week. Hope you had a good one and have an even better weekend ahead.

Rookie of the Year: Ace of Vase