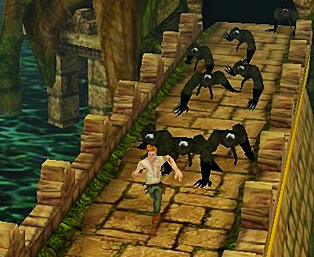 “David Heyman, who produced the Harry Potter films and Gravity, has already signed on to the project.”

The article, written and posted with such breathless enthusiasm that it defied editing, also says:

“The story would follow an Indian [sic] Jones-esque explorer who is chased by demonic foces [sic] after he has stolen an idol from a temple.”

A fine plot. But a tad obvious, no?

Here at The Rookie of the Year, we strive to think outside the box – so we’ve come up with five alternative story lines Mr. Heyman might consider instead for Temple Run, The Movie (in 3-D IMAX, where available):

1. The camera remains motionless for the entire film from the vantage point of the Girlfriend of the Year’s couch, which provides an unedited streaming view of Breaking Bad episodes on the right and her boyfriend, sitting in his comfy chair playing Temple Run 2, on the left. Occasionally, the camera pans down to an iPad, where a New York Times or Gothamist article is perused.

2. A man desperately tries to break his high score in Temple Run 2 before his commute ends. Promo copy: “It’s a desperate race against time and New York City mass transit as each power-up and blue coin brings a man closer to bragging rights with absolutely no one. Will he break his own personal best before he reaches 57th Street – or will he be forced to keep playing as he bumps into platform obstructions and his fellow commuters before nearly being struck by a yellow cab?”
SPOILER ALERT: The movie ends with the protagonist standing outside his office trying to squeeze in a few more meters before he has to be at his desk.

3. In a modern adaptation of the remake of the original Tron, six-time Olympic gold medal-winning Jamaican sprinter Usain Bolt becomes trapped inside an iOS game. He must team up with NFL reject Zack Wonder to place the stolen idol in the nerve center of a digital version of Imangi Studios and save not only themselves, but the rest of the casual gaming world, from a lifetime of significantly reduced productivity. 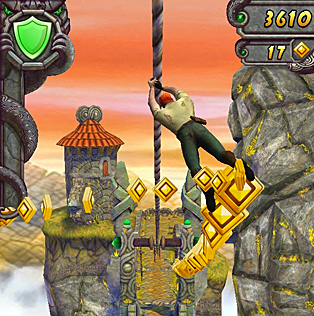 4. Called simply “Temple Run: Infinite,” the movie takes place in a dystopic future, where a combination of near-catastrophic overpopulation and general desensitization to violence and death make the odds of surviving The Running Man or The Hunger Games seem too high. Randomly-selected game show contestants are asked to run away from a flesh-eating robotic monster, and their only chance of survival is to achieve Infinirunner status. By the time they realize just how long it takes to run 10 million meters, they have already happily and voluntarily offered themselves up to be torn apart and devoured.

5. How about just not making the movie at all? Just saying.

All similarities to Matt Marrone’s life in the above scenarios are purely coincidental. You can follow him on Twitter @thebigm.

Rookie of the Year: A Fine Line Between Success And Failure

Rookie of the Year: My Favorite Game
Previous Post