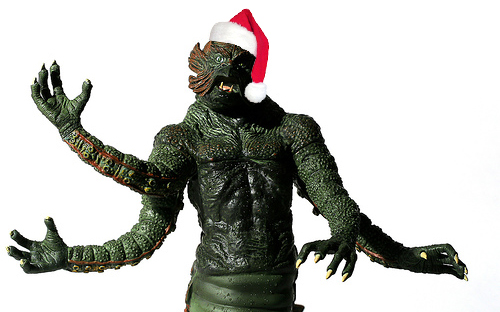 Geoff Gruetzmacher had a Christmas vision.

As an Arduino noob, Geoff had begun to dabble in tiny circuit boards and colored LEDs, soldering them together to form palm-sized contraptions run by hundreds of lines of code. I’d seen one of his early devices in action – and while its ability to light up in various patterns based on input from a Wii nunchuk was cute enough – let’s face it, it wasn’t exactly a show-stopper.

The plan was simple: Take an Arduino nano prototyping board, an MQ-3 alcohol gas sensor, design and code software to turn a homemade gadget into a computer game playable on a Mac and … okay, maybe it wasn’t all that simple. But the idea behind it was crystal clear: Make Squidalyzer, throw party, get everyone drunk.

The Squidalyzer, after all, is a homemade breathalyzer test, intended to measure – and better yet, score – a reveler’s level of intoxication.

Geoff debuted the Squidalyzer earlier this month at his now-annual holiday bash in Brooklyn, and Unwinnable was there for the occasion.

“The saddest moment of my adult life,” Geoff said, “was sitting on the floor at my own party with a coffee mug full of Four Loko trying to reprogram my buggy breathalyzer.”

Having seen it in action with our own mug of contraband, Unwinnable knew it was better than that.

“That said,” Geoff continued, “once it finally got working, it was amazing.”

And it was. Contestants approached the DIY breathalyzer throughout the evening, breathing into the gas sensor and hoping a cartoon squid would appear on Geoff’s TV monitor with the phrase, “New Hi Score!”

Kids, please do not try this at home.

So what was the night’s high score?

Matt Marrone topped out on the Squidalyzer at 72. But that was before he’d even had a drink. Hey-oh! Follow him on Twitter @thebigm.