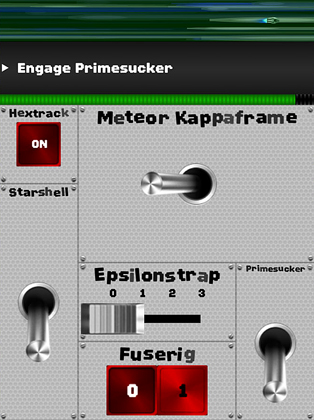 These are the commands four people – two couples – found themselves giving each other at a recent Brooklyn dinner party, reducing four 30-somethings into giggling children, half laughing at each other and half laughing at some of the seeming innuendos they were shouting across the table. Not just shouting, really, but pleading, begging each other to listen – just listen! – in a desperate attempt to avoid interplanetary disaster.

The cosmic fate awaiting the flight crew of Spaceteam – a multiplayer game for iOS that requires each player to have his/her own iPhone or iPad and to share a sometimes spotty connection over Wi-Fi or Bluetooth – can only be held off for so long. Eventually, one of your fool teammates ignores your command (or you ignore hers, but who’s counting?) and the captains go down with the ship.

Adding insult to injury, the postgame wrap-up includes awards for members of the dearly departed flight crew, and while some of them may be quite flattering, others that greeted said Brooklyn dinner party seemed to be a slap in the face:

“You have been posthumously awarded a medal for your attendance,” read one.

“You have been posthumously awarded a medal for your enthusiasm,” read another.

As the game goes on, the knobs and dials and switches burn off and break away and the commands get more absurd and tougher to follow. It’s a team effort, but you know you’re being ignored because you’ve called out for the Semantic V-pod six times already and no one has responded, the ship’s going down and you’re shouting so incessantly you may have forgotten that you were in charge of the Optical Strap.

Is your former college roommate’s wife overseeing the V-pod? She’s furthest away from you at the table. Maybe you’re not saying it loud enough. Maybe she’s never really liked you.

Or perhaps it’s your girlfriend who’s ignoring you. You’ve been training her to do it in your spare time, anyway, with your incessant rambling, and now you’ve doomed yourself to an eternity floating through the empty vacuum of space.

No, you can see your girlfriend’s iPad. She doesn’t have the Semantic V-pod after all. She’s probably been listening to you more carefully than you have to her.

So it must be your former college roommate. That fucking bastard. Doesn’t he know he’s screwing the entire Spaceteam? Why would he even do that? Will we never get past Sector 6?

Who has the Semantic V-pod?!?

Because, God help you, if one of you has it and is ignoring me, we are all going to die.

Act like you haven’t missed a beat, Matt. Just switch it on like it’s nothing. Don’t let ’em see you sweat. 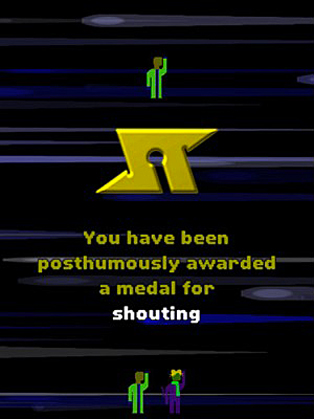 Gaming alone is a fine pastime, perfect for subway rides or late-night insomnia. Gaming against others is sweet, too, especially when you smoke your mom or your coworker Jeff or a Facebook friend you haven’t seen since high school in Scramble With Friends.

But it’s always been even more fun to work together. Gauntlet was the world’s best arcade game back in the day; you and your friend Aaron would feed it what seemed like a million quarters and power through levels by barreling into enemies and racing furiously to the exit before your health ran out, a synthesized voice reminding you all the while that Elf was about to die.

Co-op, at its finest, is all about teamwork and chaos, about loving and hating your fellow gamers in equal measure.

Which is why Spaceteam, even though we couldn’t beat it, is a winner.

Matt Marrone thinks a game isn’t a game unless your little sister is reduced to tears. Hey Becca, want to play Spaceteam? You can follow him on Twitter @thebigm.

Games, Review, Rookie of the Year