Well, this week’s column name is a bit misleading. This week, we have two reviews of comics that hit the stands today! First up, Sal Lucci reviews Grindhouse: Drive In, Bleed Out #6 from Dark Horse Comics and yours truly reviews The Shadow #100 from Dynamite Entertainment. 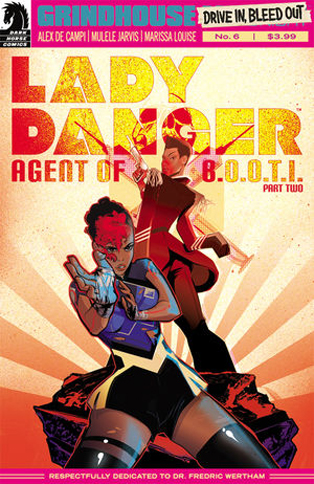 Grindhouse: Drive In, Bleed Out #6

Krush!  Whump!  Skrash!  Am I watching the old Batman TV show?  Nope, it’s just the next installment of “Lady Danger, Agent of B.O.O.T.I.”  Like last issue, there’s lots going on, and not much time, so let me see if I can break it down….

Rachelle (Lady Danger) is in a bad way after Dr. Washington roofied her last issue.  Someone may have found a cure… but wait, is that cure actually poisonous to her?  Is closing down the beauty shop and calling out the rest of the gangs going to be enough?  The Bureau of Organized Terrorism Intervention hopes so.  Did I mention Fong Ah Chan is back and there are ninjas?

As expected in the Grindhouse world, the action is non-stop and completely over the top.  Nail-biting suspense (is Rachelle gonna make it?) combined with purely evil bad guys plus a whole lotta shit-talking equals a totally fun ride.  I don’t know how writer Alex De Campi can top herself each issue, but she does with great gusto.  Mulele Jarvis’ art goes big with each scene, and I can’t imagine any other way to capture the action.

So it looks like a happy ending to our B.O.O.T.I. adventures for now, but next month promises an epic “Space-Sexploitation,” so I’ll see you back in four weeks! 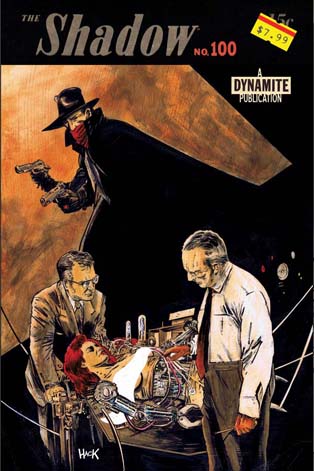 Who knows what evil lurks in the hearts of men? The Shadow knows. The seed of crime bears bitter fruit!

Last year, IDW released the Teenage Mutant Ninja Turtles 30th Anniversary Special, which celebrated the many different incarnations of Eastman and Laird’s titular heroes in a half shell. Since they first kicked their way out of the sewers, there have been several interpretations of them- each of which is bound to be somebody’s favorite. So IDW opted to spend one over-sized issue celebrating the Ninja Turtles and it was a lot of fun! The Shadow # 100 is the same kind of celebration.

The Shadow has had many incarnations since his debut in 1930 as the narrator of Detective Story Hour. He’s been a frightening radio host, a WWI veteran, a two-gunned vigilante, a crimefighter with the power to cloud men’s minds and even a movie star. Celebrating their 100th Shadow comic, Dynamite’s put together a murderer’s row of talent to explore The Shadow’s many incarnations.

Francesco Francavilla writes and draws a tale reminiscent of the Shadow’s radio roots. The narrator spins a tale of men who die laughing and the Shadow’s hunt for justice. Francavilla’s thick linework and deep colors set the tone not just for the story, but for the entirety of this book.

Victor Gischler and Chris Roberson spin the kind of crime tales one would expect to see in Walter Gibson’s (I’m sorry, I mean Maxwell Grant’s) classic pulp novels. Both Howard Chaykin and Michael Uslan both tell rather metatextual stories about the Shadow. Chaykin draws on the historic irony of role criminals played in the birth of superhero comics whereas Uslan’s story pays tribute to two pop culture icons tied to the classic crimefighter. Artists Giovanni Timpano and Stephen B. Scott hold their own with legends like Howard Chaykin and Matt Wagner.

Matt Wagner closes the issue and folks, it’s a straight up pulp story that looks like Grendel: Devil by the Deed. It’s a quintessential Shadow about the evil that lurks in the heart’s of men!

The Shadow # 100 is a love letter to the character that whose storied history set the pop culture stage for characters like Batman and V from V For Vendetta. Dynamite’s done a fantastic job with this book and it’s got me excited for their new Shadow series this August.

The Circus of Values

Rookie of the Year: Ace of Vase