I forget what inspired the fight with my girlfriend in the autumn of my sophomore year at college. She and I had been dating since high school and were always having stupid arguments, but this one ended with my girlfriend expressing her dissatisfaction with me by pointing at my stomach. She had been a runner on the track team whereas exercise and I were relative strangers to one another.

Naturally I felt she had scored a low blow and threw her out of the room with a “Good riddance!” to boot, but the anger behind my indignant reaction flamed out quickly. The sine wave of my mood disorder that charted my emotions took hold and I realized my girlfriend and I had been together for three years and how much I still loved her. Within a day of the breakup I was so low that I didn’t leave the dorm for anything other than meals or the bathroom.

After a week or so of this my friend Andy suggested I come with him to the library’s computer lounge to play a MUD, which stood for “multi user dungeon” and was essentially a multiplayer version of the text adventure game Zork released in 1980. If you’re not familiar with Zork, which is now entirely possible as the game is 33 years old, let me shamelessly steal from its Wiki page to explain.

Zork would describe the location or room the player was in and identify any objects of particular interest:

“You are standing in an open field west of a white house, with a boarded front door. There is a small mailbox here.”

The player would then interact with the world using text commands:

Then the game would describe the results of those actions.

I’d tried about five minutes worth of Zork on the computers in the back of my fourth grade classroom but that had been the entirety of my exposure to text adventures. I grew up gaming in shopping mall arcades or on my home Atari and Nintendo systems. Playing the MUD with Andy felt archaic and frustrating and I would have walked away from the game if not for the social aspects.

That I completely eschewed the MUD as a game but embraced it as a social experience makes complete sense to me in hindsight. The actual game systems in my first MMOs like EverQuest and Star Wars Galaxies felt like grinds to me, but chatting up other players was always fun.

I hadn’t been in the MUD very long before I met Mary. She was snarky and sharp. I must have been just the kind of charmingly-arrogant person she found interesting because, within a week of running into each other in one of the game dungeons, Mary and I were logging into the MUD daily just to chat privately with one another. I began spending the majority of my evenings in the library’s computer lounge and when it closed for the night I’d relocate to the computer lab that was conveniently located in the basement of my dorm.

I do not regret remembering the details as to how Mary and I moved from just chatting to becoming romantically involved, especially not if episodes like typing out the lyrics to Faith No More’s “Underwater Love” as quickly as I could in chat while listening to the song – which Mary found extremely romantic for some reason – is typical of what I’ve forgotten, but it was a textbook rebound after a breakup.

I remember finally having the wherewithal to get my computer with the orange monochrome monitor and dot matrix printer hooked up to the Internet so I could log into the MUD from my dorm room. It was after several months’ worth of this, and graduating to expensive and therefore occasional long distance telephone calls, that I realized spring break was quickly approaching and I had the bright idea to visit Mary at her college in Des Moines.

Show me the 20-year-old man who doesn’t do extremely stupid things in the course of getting laid and I’ll show you a eunuch.

I remember throwing the idea past my father just to see what he thought. He loved the idea of my adventure. I’m not sure whether he conveniently skipped the question of why I was willing to spend almost two days on a Greyhound bus to visit a girl I had never met, or if it just never occurred to him. Show me the 20-year-old man who doesn’t do extremely stupid things in the course of getting laid and I’ll show you a eunuch, a devoutly religious person, or someone who is so tremendously unlucky or inept that he has never had a chance to make stupid decisions in the interests of his penis.

As I thought about ways to raise cash for a round-trip bus ticket, I looked at my Bach trombone in the corner of the room. I’d been a trombone player since third grade. In my junior year of high school, when I wanted to audition for the Empire State Youth Orchestra Jazz Ensemble – that being one of the best high school-level jazz bands in the state of New York – I wanted a new trombone other than the old Yamaha I’d been playing for years.

My parents bought me a Bach bass trombone that also had a thumb trigger which allowed me to switch notes without having to move the trombone slide. It was a very nice instrument, but I stopped playing jazz in my freshman year of college. By my sophomore year the Bach trombone sat unattended in my closet. I was only playing in the marching band and the pep band for which my old, rusty Yamaha was more than adequate.

I brought the Bach into a music store that bought and sold used instruments. They offered me several hundred dollars for the trombone. That was way, way less than my parents had paid for it and so I declined. That night as I chatted with Mary in the MUD I looked at the Bach trombone case and wondered if I’d made the right decision.

While Mary and I did have the occasional phone call, we still communicated mostly through text. It was all too easy to idealize what the encounter with her would have been like. The power of that fantasy and the momentum of my rebound mixed into a noxious potion that I metaphorically drank and then, entranced, went back to the music store and sold my Bach for even less than their first offer, but I finally had the money for the bus ride. 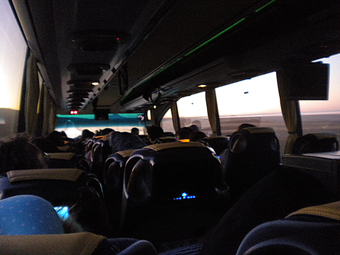 I bought the round-trip ticket and called Mary. She was ecstatic. It was around this time that I realized I probably ought to actually see what she looked like in person, and asked Mary to mail me a picture. She was neither ugly nor beautiful, but certainly no one I’d have pursued based on looks alone, but I decided those were shallow considerations anyway.

The bus ride was hell with layovers and changes in New York City and Chicago. I listened to cassette tapes on my Walkman and got as much sleep as I could over two days. I remember waking up to the sight of rows upon rows of cornfields out the windows on both sides of the bus and realizing I was getting close.

We arrived in Des Moines. I saw Mary waiting for me. Her picture had been too kind. I thought about how little I’d really gotten to know this person outside of the tone-sterile text chat environment of a MUD, and how crazy all of it was. I had a mind to just slink down, hide myself behind the seats and exercise my return trip ticket immediately. But I knew Mary had gotten us a hotel room, as I’d suggested when we’d planned the visit. I was desperate for a shower, some clean clothes and some sleep, and as long as I’d made the trip anyway…

I forgave myself for making that trip to Des Moines. I’ve never forgiven myself for selling the Bach trombone to pay for it. And I don’t worry about being exposed to violent videogames and gore. I worry about the words in videogame chat rooms. Words have made me do terrible things, especially when they were my own.

Don’t follow Dennis on Twitter if you’re as afraid of words as he is: @DennisScimeca. Header photo by Dominik Bartsch.

Robot Repair, Repaired: The Not Quite True Story Of Television’s Most Hilarious Robot