The Girlfriend of the Year, God love her, can tell you the name of some obscure Nobel Prize winner from Burma, but when I asked her to name the original cast of Saturday Night Live, she demurred.

(Okay, to be fair, she did get John Belushi. But that was it.)

So for the edification of my Yale-educated lady friend, I pulled out the iPad and showed her a few of my favorite SNL and Monty Python sketches – just the very tip of the iceberg, to be sure.

One sketch I didn’t expect to find online (thanks, Hulu!) is, as far as I’m concerned, the most underappreciated nugget of television comedy genius ever taped in front of a live studio audience. (It’s not even that it’s unloved, it’s just that it isn’t playing on a perpetual loop on a giant screen in Rock Center. You know, as it should be.)

If you’ve never seen “Robot Repair,” you’re in for a treat. I’ll embed it below and it speaks for itself. I love it so much I could easily imagine myself doing real research to discover its origins, its early drafts, its inside stories. Did Lorne loathe or love it? Was Lovitz always supposed to appear at the end or was there a different original ending or none at all? 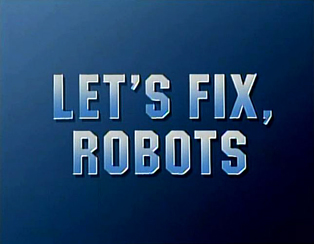 For all I know, it was a throwaway sketch no one thought was funny but the show was running short and they desperately needed filler. “Give it to Hartman,” someone suggested, and of course Phil Hartman knocked it out of the fucking park.

One day when I have nothing but time, I will end up in some records room pawing through documents to discover the truth.

It’s March 25, 1989. The host is Mary Tyler Moore and the musical guest is Elvis Costello. (Okay, all of this is true, so far, at least according to the Internet.)

Jack Handey, the genius behind “Toonces the Driving Cat” and “Happy Fun Ball” and of course “Deep Thoughts with Jack Handey,” had for weeks been haunted by the image of Hartman, silver-faced, doing a robot voice on live TV. At the same time, the world was coming to know “Deep Thoughts” as the highest form of modern American poetry – how Handey never became United States Poet Laureate is a research project in and of itself – and it was during this time that Handey had mastered the English language to a point where, with a mere comma, he could reduce an audience to tears.

It was almost getting too easy for Handey. Inflection itself no longer even mattered. Hartman speaking in a dehumanized voice was a hook, for sure, but having him talk about diction and punctuation – not just talk, but become infuriated by it – was the real window into the world of a comedy writer who had morphed into a true man of letters.

When did the sketch air? Did it almost not make it to television? In my made-up history, it was the last sketch that night, right before Mary Tyler Moore thanked everyone for coming, the sketch that during lean years is so awful you’ve probably long since changed the channel anyway, but during the show’s fleeting periods of genius is so good that even if the majority of the audience never comes to appreciate it, or remember it, it has to be made.

Fortunately, whenever it aired that night, “Robot Repair” was made. And it has not been forgotten. It even made a “Best of Phil Hartman” collection.

“Robot Repair” lives on, to delight of writers and editors and geeks everywhere. One day, someone will tell its true story on the Internet.

And then? Then it will be burned onto a bronze disk, shot up into outer space – and alien races millions of miles away will believe we were hysterical tin men who never got bored with our own language.

Matt Marrone thinks infuriation is the finest expression of comedy (think Chris Farley getting his coffee crystals switched or just about any episode of Fawlty Towers, most notably “The Germans”) . You can follow him on Twitter @thebigm.