Sex is many things to many people. Sex is love, power, release, revenge, an endless affirmation of lifelong companionship or an urgent night of lust between strangers. Sex is a defining moment, or a comfortable constant, or a swirling haze of passion and snatched recollection as time quickens and slows with reckless abandon. It’s a spectrum of wants and desires stretching beyond the horizon in every direction, an intrinsic part of our cultural existence.

Yet while sex may be the underlying theme of 90 percent of popular music and countless novels and movies hailed as classics, videogames have struggled to keep up.

You fuck, you save the galaxy, credits roll.

It’s no surprise that gaming and sex have a dysfunctional relationship. Even as the average age of the gaming population has soared upward, videogames have remained mired in immaturity. When a player’s interactions with their world are limited to increasingly graphic displays of violence, slow-motion headshots and decapitations, sex can never be more than a distraction from the chaos ­– God of War’s ridiculous vase-breaking QTE, basically, and that merely a brief moment of vapid titillation between tearing the heads from mythology’s finest creations.

Even if game developers want to broach the topic, the enjoyable elements of sex are notoriously difficult to reproduce in isolation, entwined so deeply with emotion, connection and the specific desires of the individual; the very idea of translating such an act in full into satisfying game mechanics seems both futile and more than a little creepy to modern sensibilities. 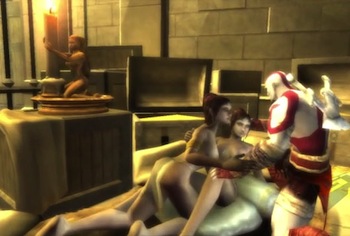 So if the physicality of sex has no place in modern mainstream games, what about its emotional elements? What about sex as a narrative device, a lens to draw focus onto a character and their relationships with others?

Unfortunately ­– with the occasional notable exception – even games which attempt to handle relationships with a greater degree of maturity tend to give sex a raw deal. For example, despite an increasing focus game-to-game on shooting humanoids in the face, Mass Effect and its sequels were at their best when dealing with the interactions between Commander Shepard and the crew of the Normandy.

As long as you could ignore the cutscenes’ obsession with Miranda’s infeasibly shiny buttocks Mass Effect gave you time to come to know your companions and to understand them, culminating in the opportunity to become involved in an extended intimate relationship across all three games (provided you didn’t get them killed along the way).

It’s a brave attempt to treat sex and relationships as more than just an empty bullet-point, though it’s by no means perfect. Despite all the moves in the right direction, sex in Mass Effect is still only ever treated as one thing: an achievement. The pinnacle of a relationship to which you must aspire.

Spend your in-game interactions saying the right things to the right person and you too can be rewarded with a shiny metal heart-shaped badge and a short cutscene of implied xenosexual intimacy. Nothing says sexy like completing the romance subplot.

Sex as achievement may be a step up from a QTE, but it’s still entangling the sexual act in a game mechanic. The very existence of such a link creates an implicit expectation that the player can – and perhaps, should– manipulate the game to obtain the achievement. 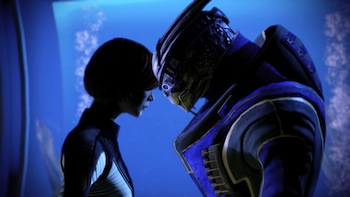 A relationship becomes less about making a connection with another person, even a fictional one, and more about the reward at the end, less sex and more orgasm. Perhaps Bioware are victims of their own success in building convincing and sympathetic characters, but the juxtaposition of genuine emotions towards the crew and the allure of meta-gaming to obtain the paramour achievement left me with an unpleasant cognitive dissonance.

Was I choosing the responses appropriate to Shepard’s current situation and her feelings on the matter, or did I just want to tick getting down off my list? And if so, did that mean I ­– as Shepard – was actually toying with the supposed object of my affections, trying to trick them into bed like some creepy intergalactic pickup artist?

It’s a disparity only emphasized by the placement of the sex scenes themselves, each occurring in the lull before the storm just before Shepard plunges into battle to save the galaxy. The timing is clearly intended to make best use of sex’s power as a narrative device – a punctuation to all your efforts reminding you of the personal factors at stake to complement the impending epic climax – while also maximizing the player’s opportunities to meet the criteria to trigger the scene.

However, it also has the unintended side effect of leaving no time to reflect on the relationship afterwards. There’s literally nothing more you can say to or do with your partner. You fuck, you save the galaxy, credits roll.

Persona 4 has a similarly dichotomous attitude to relationships, once again as an unfortunate result of its superb character work. A significant part of Persona‘s appeal is in forging relationships with the people you meet, in spending time with them to boost both your understanding of them as people and your social links which grant you various bonuses in combat.

Thanks to the excellent writing, the former often succeeds in taking precedence over the latter. You want to know who your friends are, what makes them tick, their ambitions and their fears.

Personally, I ended up in a relationship with a character not because I wanted the power she offered, nor because I wanted some achievement, but because she was clearly going through some shit and needed someone to be there. If I didn’t step up to the plate, who else would? 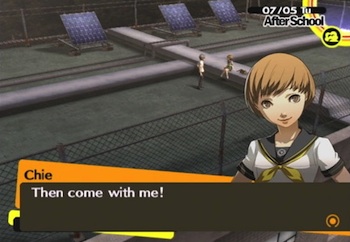 Yet once again, sex was the death-knell of the relationship. In keeping with the game’s high-school milieu, sexual activity is simply implied; once you’re in an “intimate” relationship with one of the girls, they’ll invite themselves over to stay the night in your room.

That said, since Persona 4’s day-to-day mechanics are built on time-management, having a girl stay the night wastes a block of time with no benefit. The first time can be justified as curiosity, but after that the game actively dissuades you from repeating the act. If you’ve had sex once, Persona 4 promises, you’ll never see the point in doing so again.

(Okay, maybe twice, but that’ll just be to check that nothing was any different the second time.)

Clearly the game industry is inching forward, pushing the boundaries, but success means walking a knife-edge between the ridiculous and the obscene. If sex can mean so many things to so many people, isn’t it time we figured out how to incorporate the concept of sex into games without tittering like schoolchildren, shoe-horning it into ridiculous QTEs or manipulating dialogue trees for sex points?

Aren’t we as consumers ready for mature characters who include sex in their lives without it being a masturbatory fantasy for the player or another check-box on the increasing to-do list of modern gaming?

Maybe we should be.