In a pinch, sex is the cheapest glue for attaching some kind of thematic authenticity to a work. Sex bridges the gap between otherwise incompatible characters. Sex implies worth and development. Sex makes sure people know your story has all sorts of mature considerations. Look closely and you’ll see poorly applied sex spilling out in globs from around the pasted pieces of many a lazy story. As an audience, we’re often willfully susceptible to sex’s convenience and ubiquity in the things we consume. We ignore the particulars of the act and accept its flimsy symbolism as any number of false qualities and devices. It’s just so damn relatable.

Perhaps more than anything, the worth of sex in a work is in how it happens, not simply that it does.

David Cage is nothing if not an exuberant disciple of authenticity. As the director, lead designer and screenwriter at Quantic Dream, he commands projects built on technical innovation and dependence, and games that promise to hand down revolutions in emotional storytelling from the bleeding peak of visual fidelity. Sometimes, the games he writes show sparks of brilliance from within a complex anatomy. Sometimes, he seems to wind himself so completely around achieving subtlety through tomorrow’s technology – squeezing every thrice-rendered, motion-captured yard from it and making a small interaction with that the game – that this unimpeachable enthusiasm for telling stories is smothered in the crib. This was often the case with Heavy Rain, Cage’s 2010 conflicted noir drama opus, which combined small but specific player input and choice with an extensively animated and edited end product.

It’s sex – a manufactured attempt to capture intimacy in a fleeting moment – that shows Heavy Rain at its most flawed. It goes something like this.

Ethan Mars is a father. He loses a first child to a tragic accident and a second to the whims of a serial killer, who tests Ethan’s love and dedication to his son with morally and physically taxing trials. These tests are elaborate, cruel and often unflinchingly gruesome. “The Bear” forces Ethan to drive against traffic on the highway. In “The Butterfly,” he crawls on forearms and knees through a tunnel littered with broken glass before contorting his frame to slip through a field of electrical condensers. “The Lizard” simply has Ethan maim himself. In each instance, the game repurposes its context-sensitive mechanic of interaction, which requires pressing and holding buttons and manipulating the analogue sticks to match on-screen prompts, to convey, effectively, the difficulty, closeness and mortal danger of the trials. 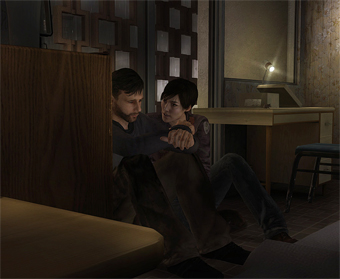 David Cage likes to construct moments of tremendous weight and consequence, like Ethan’s trials. The abstracted means of interaction he gives the player in order to do so often seems like a realization of the cinematic facsimile he’s chasing. That is, when subtlety isn’t a factor. There’s a limit to what his glossy, filmic leanings can do well, or at all believably. Tension and fear, anger and despair – these are the large targets, the broad, room-filling emotions of action and immediacy Cage’s designs can hit with consistency. Intimacy and sex, not so much. The former is a slippery, formless thing that even a Blu-ray’s worth of high-resolution assets and motion capture data can’t mimic. The latter is a complex act in flux, a physical secret Cage has never been able to decipher and map to a series of stick pushes and button presses. It hasn’t stopped him from trying.

In Indigo Prophecy, Quantic Dream’s previous game, the main character rekindles an old fling by strumming a song as the player matches patterns on a terribly conspicuous Simon overlay. Instigating a kiss afterward leads to a composition of shots from the bedroom, where one flesh-tone model is slowly, romantically, dragged back and forth over the other. The moment, positioned as catharsis amid disaster, continues to completion as long as the player repeats one button press, an upward tilt of the stick. The action is meant to correspond with each deadened, measured thrust; feeding coins into a broken peepshow may be a more suitable analogy.

Perhaps more than anything, the worth of sex in a work is in how it happens, not simply that it does. Good sex, thoughtfully approached sex, can say or reveal something meaningful about characters. It can be the completion or destruction of an identity, the affirmation of a problem or of a solution. In Heavy Rain, sex is an exercise in canned emotion, choreographed and programmed to the point of hollowness.

It happens when the player has moved past four of five trials. Regardless of their outcome, Ethan suffers incalculable mental trauma, to say nothing of burns, punctures and other likely wounds. Sitting on the floor of his motel room, he’s lost in grief and black depression. Madison, the journalist aiding him, returns and tries to console him with new information. He ignores her. She wipes a tear from his cheek. As he turns, their heads are already locked in preparation for a kiss. The scene starts, but the kiss never comes. Instead, their faces make small jaw movements adjacent to each other, chewing at the empty space between the other’s lips. After a moment, they separate. An arrow in a large white box appears between their faces, prompting the player to begin the kissing anew. And so on. 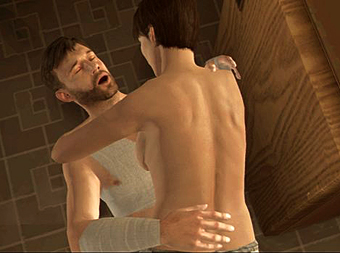 In the midst of this awkward interaction, nothing is revealed about the characters, other than that they make for good sculpture, fucking there on the carpet in front of rain-spattered motel windows. No danger, no compromise. No consciousness of anything more than the moment’s alleged bliss. Cage’s slipshod writing leaves both Ethan and Madison as a pair of pretty synthetic faces, rubbing together blithely to assuage some greater thematic power. They’re inevitably fake because he wants so badly for them to be real.

Their intimacy rides a straight rail of button prompts and arrows: those that caress, backed by intermittent gasps and heaves; those that, in small combinations, hastily unzip; those that shift the position of a hand; those that start the two necking. Those that cradle a head, though the hands don’t actually make contact, or move arms with an alarming angle and momentum to slip off a shirt and bra. There’s a bracing disconnect in the appearance and fulfillment of the prompts and the characters’ stiff actions. In the seconds between, you can see the gears shift. If you struggle, the scene hangs; the figures slip back and forth between old and new animations. You can watch the machines break.