I could rattle off a slew of open-world videogames that purport to take place in “cities,” like Grand Theft Auto III and IV, the Saints Row games and the Crackdown series – but they’re all liars. If you erased all the buildings in Liberty City, Stilwater, Steelport and Pacific City that had no doors by which to enter them, you might be left with enough buildings to put together a frontier town in the Wild West. I’ve only played one videogame that actually had what I consider cities: Star Wars Galaxies.

In Galaxies, you could buy a house “deed” from a crafter, which then lived on your datapad until you decided to place it on the surface of an eligible planet. The camera would cut to an extreme high-angle view of the surrounding area, you’d move a wireframe outline of your house around and then drop it. The house would phase into existence and you could move in, decorate the rooms and store all your gear. If you wanted to later move the house, you could pack it back into a deed without disturbing any of your interior decorating or messing up the contents of any containers you’d placed in the house.

My relationship with Galaxies will forever serve as a personal signpost for how addictive a virtual world can become.

Galaxies had default cities when the game launched, like Coronet on the planet Corellia, Mos Eisley on Tatooine and Theed on Naboo. They were the only places you could find hospitals, cantinas, banks, bazaars and, most importantly, spaceports. Players would usually drop their houses on the outskirts of these big cities to be close to all the conveniences. Then player cities went live, and the face of the game changed forever.

When a player building called a city hall was dropped on a planet, it defined the radius of a small outpost. If enough players built houses within that radius and registered as citizens of the outpost, after a week it would grow into a village, and after another week a township, then a city and finally into a metropolis (as long as more and more people kept moving in). The larger the city, the better the civic structures the city would support – banks, garages, hospitals and shuttleports. Soon, all the major guilds had built their own cities across the surfaces of the huge planets in Galaxies, and the only thing anyone needed the default cities for was spaceports.

Merchants moved in to the biggest player cities in order to sell their wares in convenient, high-traffic locations. Groups of guilds that had declared for either the Rebellion or the Empire moved into cities together for mutual defense, and so Rebel and Imperial strongholds sprung up on all the servers. Cities could declare specializations, like providing bonuses to the quality of crafted items within the city limits, or granting increased credit payouts for missions taken from mission terminals within the city, thus attracting a certain kind of citizen or clientele. Player cities became the new capitals of the Star Wars universe.

I role-played as an Imperial Intelligence officer on the Starsider role-play server, so I spent most of my time visiting Imperial-aligned cities and organizing guild leaders for the Galactic Civil War player-versus-player metagame. Every city I visited drew its character from the planet on which it was located and from the nature of its founders, just like cities in the real world 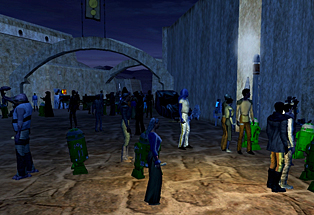 Flame’s Hold on the Imperial moon of Talus was the capital city of a guild named The Shadowhawk Conglomerate. Corellian-style buildings were the norm in Flame’s Hold: gray, with long rows of windows at the tops of their walls, slanted sides and distinctive curves. The Shadowhawk Conglomerate was always a friendly bunch of guys and Flame’s Hold was a warm, inviting city. Their city hall, adorned with office lights ablaze at all hours of the day, let you know they were efficient and all about finishing whatever job needed doing.

The city of Sintari belonged to a guild called Interplanetary Security Force, a mining consortium that was technically neutral but sold primarily to the Imperial players. Sintari was filled with fountains and gardens that complemented the purple grasses and other gorgeous flora of the planet Dantooine, and a hodge-podge of different styles of architecture and houses was almost uniformly huge. The Interplanetary Security Force was mostly concerned with money, and Sintari was decadently decorated and not terribly organized, but it was a pretty place to visit.

The Black Star Legion built their stronghold of Imperia Tiberius on the desolate desert moon of Lok, erecting buildings of sandstone that looked as blasted and weathered as the rest of the landscape. The Legion was mostly concerned with the space portion of the game and spent most of their time in their starfighters and transports. So Imperia Tiberius was mostly about storage and usually as devoid of residents as the planet Lok was of life.

The jewel of the Imperial player cities was Thalnax. Located in the southwest corner of the planet Naboo, the city was composed entirely of Naboo-style homes, which were some of the most architecturally-interesting player houses in the game: tan brick buildings with copper roofs, domes, ivy growing on the walls and interiors with rich, red carpeting. Thalnax was the home of The Imperial Order, one of the oldest, largest and best-known Imperial guilds on the server. 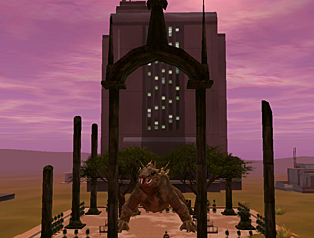 The Order had chosen Thalnax’s location based on proximity to the Emperor’s Retreat, an Imperial theme park and hub for quest lines specific to Imperial characters. The city therefore saw a ton of traffic from Imperial players, and several PAs moved their businesses to Thalnax specifically to take advantage of the constant flow of visitors. Thalnax had hundreds of houses organized by size – mansions in the city center, large homes in the surrounding neighborhood and the smallest houses placed on the periphery – and into a perfect grid of city streets. Thalnax was as orderly and tightly-run as The Imperial Order was strictly organized into ministries and departments. That’s eventually where I settled down, as I became more deeply embroiled in the Galactic Civil War and wanted to be part of the biggest power on the server.

My Naboo-style mansion served as the Thalnax city embassy, and it stood in the city center across from the shuttleport and right next to city hall. Often, I would open the Naboo planetary map and set my filter to display Imperial faction bases, the military structures that could only be placed by Galaxies players who had declared for the Empire. I’d see the ring of Imperial bases displayed around Thalnax and feel proud to live at the heart of the most powerful and well-known Imperial city on the server, just as proud as I’ve ever felt to live anywhere out here in the real world.

I always feel inclined to mention during my Star Wars Galaxies reminiscences that I was so heavily embroiled in the game because I was quite ill during the years I played it. My relationship with Galaxies will forever serve as a personal signpost for how addictive a virtual world can become. I had one last taste during my final visit to the Starsider server, five and one-half years after I stopped playing the game, and just a few months before Sony Online Entertainment closed it down forever.

Starsider was a ghost town. However, I did run into a friend from the old days, Lexx, who had been the leader of an Imperial guild on Tatooine and therefore was someone I’d networked, organized and fought together with often. We caught up and chatted; I said that I wanted to see Thalnax once more before the game shut down, so we went to the closest spaceport, jumped into his starship and took off for Naboo. 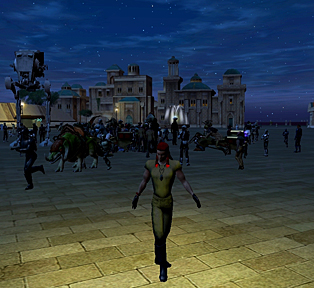 Neither one of us could remember precisely where Thalnax had been, but we landed in a city in the southwest of Naboo, hopped in our landspeeders and drove off towards the Emperor’s Retreat. I figured we’d search the area, eventually see some of the neatly laid-out streets on the outskirts of Thalnax and then just have to find our way to the city center. The planets in Galaxies were huge, and after an hour of searching I was ready to give up when I remembered we could drop waypoints on the map and store coordinates in our datapads. Sure enough, I had a waypoint for Thalnax, which I shared with Lexx. We activated them, and a bright blue column of light shone into the sky just over the next hill.

It stood in the center of a grassy field, in the shadow of a nearby mountain. Thalnax was completely gone. I was surprisingly depressed to have that realization, my virtual avatar standing in the middle of a virtual grassy field in the virtual shadow of a virtual mountain on a virtual planet in a game that was about to be sent to electronic heaven by its corporate overlords. Then I remembered that waypoints weren’t the only thing stored on our datapads in Star Wars Galaxies. That’s also where our house deeds were.

I found the deed for the Thalnax city embassy, and dropped the house smack-dab on top of the glowing waypoint. My Naboo-style mansion phased into existence, its rooms still decorated and my Imperial Intelligence office still set up with scanners. Stormtroopers stood guard and starship holograms floated in the air. For just a little while, the city of Thalnax lived again, and I was grateful.

It’s moments like those that keep me trying new MMORPGs, even though I recognize the danger I’ll be in when I finally find one that gives me what I’m looking for. When I walk the streets of Liberty City in Grand Theft Auto IV, I wish other people could be there with me. When I build structures in Minecraft, I wish there could be a thousand other people there alongside me. We could build a city together and then visit the other city built by another thousand people just over the horizon.

What makes a city is the people who live there, and that’s precisely the one thing that cities in videogames don’t have. They’re all fake, and they’re all liars. Someday, though, I’ll get to visit a videogame city again. I’ll just have to make sure I rent instead of own, so I don’t virtually settle down. I have cities to visit out here in the real world, too.

You can tell Dennis Scimeca he was way, way too into Star Wars Galaxies on Twitter @DennisScimeca.

A week in the city, Star Wars Galaxies, Thalnax