I am getting ahead of myself. My son, Halford, can barely hold his head up and I’m already plotting his reading habits. These things must be planned, I tell myself. Fantagraphics might let some of those Carl Barks Donald Duck books go out of print. So, I compile a wish list on Amazon of Tin Tin, Astroboy and Asterix – all the fine cartoon art a growing boy needs.

As I’m thinking about this stuff I wonder if my father thought similarly. I don’t think so. Things were different for him. He had to work much harder than I do. Money was more scarce. And dad wasn’t exactly a pop culture aficionado anyway. He did read science fiction books by the bushel, but my library was built inadvertently. Those dog-eared Heinlein and Asimov paperbacks were hand-me-downs.

My son, Halford, can barely hold his head up and I’m already plotting his reading habits.

I remember my father making sure we appreciated the finer things such as Star Trek and I am pretty sure he led by example with weird old anthologies like The Twilight Zone and The Outer Limits. My memory is fuzzy, to be honest. It has been so long that I have a hard time recalling what my father tried to impress on me and what I have just come to credit him for teaching.

By the time I was 16 or so, dad was gone. He lived in the Caribbean and we remained in Florida pretending that our family was still whole. My mother and father should have separated long before, but they held out in an attempt to retain a semblance of normalcy. It didn’t work.

At this point I no longer fault my folks for splitting up. I’m not even mad at my father for skipping out to some island. No, I’m more ticked off about the last 20 years. It has always been on me to visit my father – to fly 3,000 miles to San Juan, Puerto Rico, then drive east to my father’s remote rainforest compound at the base of El Yunque. I dutifully make the trip every year or so. 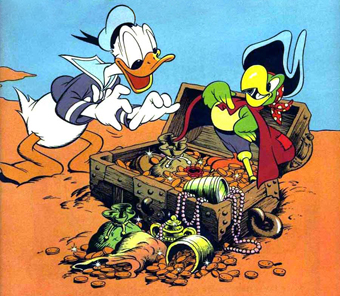 In the long years since I was 16, my father has come to visit me where I live exactly once. That was because my apartment in Minneapolis was reasonably close to a spot in Wisconsin where he’d be hunting.

Now there’s something dad tried to impart. I have vivid memories of hunting expeditions in the wilds of Florida. The place was called Cuban Squares. It was an aborted housing development on the edge of the Everglades. The grid of roads was sketched out in dirt, but the lots were still pristine – scrub pine and razor palm. The trick was to send one group through the woods while another waited on the next street over and shot whatever you flushed. I never shot an animal. I only remember paralyzing boredom and the desperate need to impress my dad.

I am terrified that I will leave Halford the same legacy. Will heavy metal and comics and games be these things that his asshole, deadbeat dad loved more than his own son? What if I die at 50 or 60 and Halford resents all this shit that I cared about? Because all the things in the world are worthless when a father is gone.

My son is a nearly a month old and I still haven’t called my father. I suppose that makes me a bad son. I have received two missed calls from Puerto Rico, but I haven’t returned them. I know that I am supposed to forgive so that Hal can have his abuelo, no matter how fleeting that time is, but goddamn if I can’t set aside my anger about it all. Not yet at least. I want to give Hal everything in the world – to school him in comics and turn him on to music and help him be a happy person. But this depressing fucking rage is mine. And I am terrified that he might inherit it anyway.