On the last Thursday of GDC, Harry Lee was preparing to kill himself in front of an audience. The nineteen-year-old game designer and med student strapped an arcane medical device around his arm and gave the audience a proposal.

“This is an EMS, an electromyostimulator. This device is really cool because it can control people and cause them to involuntarily contract their muscles…If I press the button here, my hand contracts like that. It causes an excruciating amount of pain.” 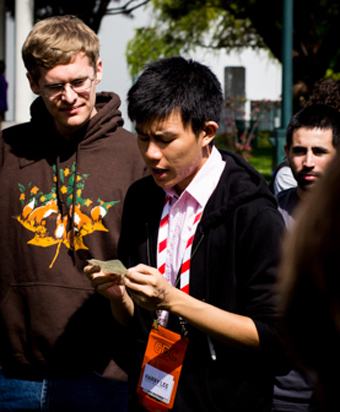 His trembling fist unfolded, with the presumption that this was happening against his will. He gritted his teeth.

“One of the problems I’d like to propose to you is: what is my next choice? Do I continue medicine and try to do something more effective, directly saving people? Or do I continue games, something I’m better at and maybe a bit more passionate about?”

Lee’s morbid theatrics were delivered in an upbeat tone. A few muffled laughs lightened the mood.

“These are the questions I wanted to pose to you while shocking myself…If the answer’s right, I live. If it’s wrong, you kill me. Ready? Quick: what should I do, medicine or games!?”

“GAMES!!” The audience shouted in unison. Lee was still standing, so apparently this was the right answer.

Make games or die. That’s what Lost Levels is about. This open-air and low-tech “un-conference” was hosted at the public Yerba Buena park space across the street from GDC 2013, and delivered a radically different ethos. Lost Levels was all about inclusiveness, freedom and diversity. While the high-tech gaming professionals were busy competing for jobs, contacts and floor space across the street, Lost Levels was chugging itself along free of charge. Anyone was allowed to talk and any topics were fair game. Speakers ranged from the “queer tranarchofeminist” Twine author Porpentine to Rod Humble, the current Linden Lab CEO.

As diverse as this amorphous crowd was, they had one consensus: games are important. Earth-shatteringly important. Just after the audience had supposedly saved Lee’s life once, he immediately snapped to the next life-or-death question. “Why do we love what we do so much, to the extent of cutting out all other possibilities in life, and why aren’t we more interested in the intersection between health and games?”

The crowd gave their answers one-by-one.

“‘Because games are culture and culture is humanity, so making games is saving humanity.”

“We all have to be selfish to a certain extent, otherwise we won’t be happy. You have to define what makes you happy and brings out your passion, and pursue that in your life.” 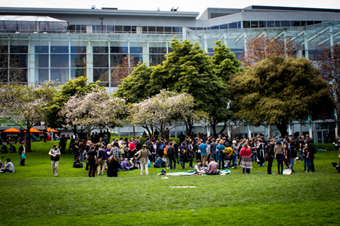 During this year’s particularly indie-centric GDC, Lost Levels was a place for indies who were too indie for the mainstream indies. And what a weird concept that is! The space between publisher-sponsored games and independently-produced games is shrinking and nowhere was this trend more visible than at this year’s GDC. Nintendo, Sony and Microsoft set up booths that were lounges, geared more towards networking with professionals than showcasing products. Gratuitously high-tech displays of cutting-edge AAA game demos were a bit more inconspicuous than usual. In the absence of mega corporate keynotes and over-the-top press shows, there was a tight focus on individual human beings, people who had names and faces. Karla Zimonja and Steve Gaynor. Chipzel and Terry Cavanagh. Anna Anthropy. Richard Hofmeier. Porpentine.

It’s a movement so alarmingly visible that it made The New York Times. Andy Schatz wrote his IGF Awards presentation speech about it. Across the street, Lost Levels was its microcosm, reveling in the chaotic new era of the individual.

These five-minute micro-talks were organized into three “worlds” (a-la Mario), spaces in the park where speakers would deliberate over tarps in the grass. Listeners would sit, stand, play, dance or jam, depending on the session. The schedule was always in a state of flux, and talks were organized via lateral post-it notes stuck on poster board.

I dropped over to World 3-4 to hear Porpentine’s talk, titled “Kerrigan had the Right Idea.” It wasn’t a speech or a lecture so much as some kind of spoken word writing thing that was borderline poetry (in fact, calling many of these talks “borderline poetry” might not be inaccurate.) Her proto-Kerrigan prose began with nostalgic memories of cracking the Zerg matriarch’s whip, and somehow worked its way towards a brutal condemnation of videogame workplace misogyny. 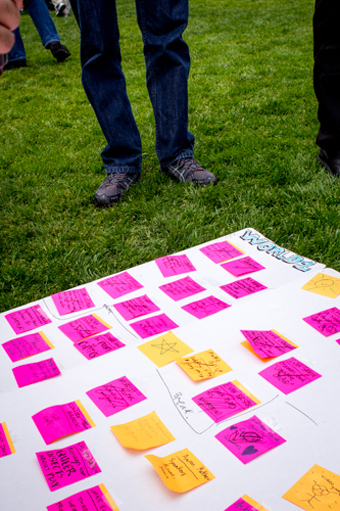 World 1-5 was Rod Humble’s “Game Theory & How We can Drag it into the Gutter.” He was flipping through an insane assortment of hand-written notes and charts, going on about negative feedback loops and no-random perfect information games, turning through page after page of scribbled formulas. Humble is an upper-level executive in charge of corporate game brands like The Sims, but also the creator of experimental lo-fi art games like The Marriage and Stars Over Half-Moon Bay. He’s an authority for both sides of the fence, and couldn’t have found a more perfect venue. The unfortunate thing was that a lot of his stuff sailed right over my head.

Christ, I thought to myself. I don’t make games. I write stuff. What the hell am I doing here? It was a tad overwhelming. The personalities behind Lost Levels were bohemian. They referred to each other by their Twitter handles and wore weirder clothes than me. As a journalist who hasn’t worked on a game in years, I stuck out like a sore thumb.

Later, Roger Hanna said online games are too libertarian and that we need a system for building meaningful relationships with online strangers. Kate Compton reminded us that gender isn’t a Boolean value, and that games rarely recognize this. Lals Das wanted to talk about how to make queer games. Not games whose creators or themes were queer – games that could self-identify themselves as queer.

If GDC is for game developers, then Lost Levels is for game auteurs. According to the Robert Yang (one of the event organizers,) it’s not a response or rebuttal to GDC’s exclusive environment and high prices, but in practice it’s a natural alternative to them. It juggles a rock star lineup of celebrated developers against the promise that it’ll welcome anyone and anything to speak. Its lo-fi presentation spawned ideas that are absolutely cutting edge, ideas that are harder to fit inside convention halls with a high barrier to entry. They’re questionable ideas and their practicality is doubtful, but that’s why they’re exciting. If there wasn’t any doubt, then they wouldn’t be risky, daring and exciting.

These are the people moving too fast for GDC. Though the attendees and speakers of both conferences were largely the same population, this was a different place altogether. A place where some of the most influential and energetic personalities from GDC could have their own space, supervised by their own rules. The twist is that, much like the seeming future of videogames, there are no rules.