Quentin Tarantino opens Pulp Fiction with two definitions of pulp: the first as a “shapeless mass of matter,” and the second as a publication, often featuring fantastic or highly stylized content, printed on cheap paper. While most film critics point to the second definition in providing frame, structure and exploit to the film itself, few give attention to that soft, shapeless mass of matter or what it’s really made of. Traditionally, the pulping manufacture process treats wood through various means to break cellulose down, resulting in a gloopy mess that eventually (some would say miraculously) becomes paper. Having lived in a college town not too far from a pulping facility, I can attest to the inherent inapproachability of the idea of pulp, both metaphorically and literally (the stuff stinks like crazy). 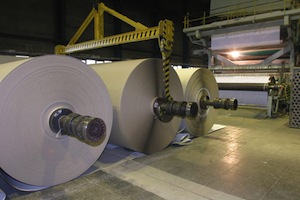 I think a lot of players (myself included, at least initially) had a similar problem with Remedy’s 2010 game Alan Wake. The developers never claimed Wake was just a survival horror game, and the generosity of needed items, repetitive enemy models and Max Payne-esque slow motion time all work against the tense atmosphere the game nevertheless tries to create. It’s a shame, because if you go into the game without genre expectations, you’ll discover a title whose vivid imagery and melodramatic sensibilities scream pulp to such a degree that you’ll have to spit your orange juice out (if you happen to be playing it over breakfast). Wake’s episodic structure, quasi-cheesy dialogue and reliance on improbable action show its nuanced understanding of material that most people read, but few read deeply. In fact, it’s only because people have pigeonholed Wake in much the same way that pulp itself often is, that the game seems to fail to deliver on its promises of excitement, exhilaration, and fun.

There’s a wonderful sense of dissonance to be had in Alan Wake.

Wake features you as the eponymous character, a thirty-something best-selling thrill writer who just can’t finish his next book. He goes to a secluded hotel to be caretaker with his family, slowly goes mad and then secluded cabin in the Pacific Northwest town of Bright Falls, a name laughably ironic (until you realize that it actually kind of makes sense). Looking for a period of calm and relaxation, Wake instead gets in a fight with his wife, stomps off and then returns to see her taken away by a mysterious dark presence. Which means, of course, that he has to go after her, setting off an adventure that has him negotiating with kidnappers, getting chased by evil spirit loggers and communicating with dead writers. (I have a feeling this is why most people just decide to go to Disney World for their vacations.) Still, aside from some twists and turns that are too much fun to ruin here, that’s about it. It’s not a masterpiece but then again, if I had to describe the plot of Mrs. Dalloway to someone, I would probably say that it’s a novel about a woman who talks to herself.

You’ll notice I’m taking a fun tone with the game, even though it does have high stakes and is at times genuinely scary. That’s because, to enjoy the game to the fullest extent, you have to mock it. Or at least be at ease with the idea of laughing at its Buster Keaton-sized gaffes every couple minutes. 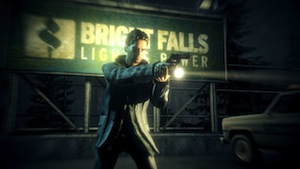 There’s a wonderful sense of dissonance to be had in Alan Wake. It occurs the instant the game begins, but doesn’t truly dawn on you until you’ve gotten to know Alan a little, fumbled with flashlight and dialogue alike. And it’s this: for all of Alan’s accolades and sense of
accomplishment and distinction, he is a remarkably mediocre writer. It’s the same sense of dissonance that pulled me out of the recent horror film Sinister: how can we believe in a world where these men are popular writers when they both clearly portray a lack of understanding regarding how to research their chosen genres and aren’t very good writers themselves? Both Alan and Ellison Oswalt act as if they had never written a novel in their lives and are excruciatingly unaware of how similar their predicaments are to everything they have written. It’s not just the manuscript pages that Alan find while making his way through the area around Bright Falls, it’s the bone-headed things he says, or the lack of conclusions he jumps to, that make you wonder when he left his job at McDonalds to start a career as a writer.

But here’s the thing: that dissonance starts to melt away as you play and become increasingly wrapped up in the thrills, twists and allusions that it has to offer. Without coming off as pretentious, it is self-aware of its conventions: it’s obvious in the way Matthew Porretta, who voices Alan, always recaps with a smoky, “Previously on Alan Wake…“; the disinterested tone he always speaks and thinks in, even when discovering mind-boggling revelations; the constant reference to, and even direct quotation of, Stephen King. (In fact, the very first line is a Stephen King line about the poetry of fear being anything but logical). 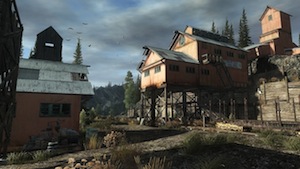 That line, and the fact that it is framed within Alan’s own formulation (“Stephen King once said that…”) should be a primer for us as we play the game – here’s something that jubilantly points out its inspirations and uses them as a shortcut to set a stark, tense atmosphere that’s surprisingly effective despite its derivativeness. The town is straight out of Twin Peaks, has a nightly program that’s a spoof of Twilight Zone and The Outer Limits, the models all look like they ambled out of John Carpenter’s The Fog and the story itself, about a writer with writer’s block who faces extreme problems when he “just tries to get away from it all,” is so overplayed I wouldn’t be surprised if the writing of such a story were the cure for writer’s block. These factors allow the game to create this peculiar tension where half of it is a rollercoaster thrill ride while the other half is a loving jab at those very overblown gesticulations. It makes you think, “I really got surprised by that twist?” and then sneakily gets you with another not five minutes later.

Of course, Alan Wake isn’t the first story to revel in its own flaws. Pulp does that all the time. Or, rather, it does that because many people have decided that it does, chiefly because they decided that literary pulp is not just physically low quality, but in its content as well. 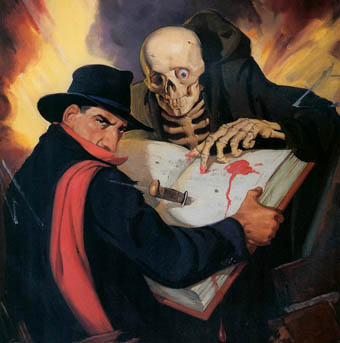 One of the reasons pulp fiction was – and is – regarded with distrust is because it stems from a history that is all-inclusive. As increases in printing technology developed in the late 19th and early 20th centuries, closet dramas, penny dreadfuls and dime novels gave way to pamphlets, digests and pulp magazines, each able to branch off into its own area of interest. Both the low quality of paper and the increasingly-cheaper means of production meant a high supply for the increasing amount of people who could read. Pulp brought the trend of affordable and exciting reads for the masses ushering literary culture into the mainstream. You know the names of writers who got their start in the pulps: Asimov, Chandler, Hammet, Fitzgerald, Lovecraft, Kipling and L’Amour, among many missed.

As a result, many self-perceived “highbrow” writers and critics decided to decry this “trashy material” as vapid and aiming for the lowest common denominator. Nevertheless, it was the pulps that ignited the masses’ imaginations as they found themselves with more leisure time. (If you are really interested in examining the differences in these types of art, check out Virginia Woolf’s letter to the Editor of the “New Statesman” in 1932, and other discussions of highbrow, middlebrow and lowbrow). For a good case study, one needn’t look further than the The Shadow, a 1930s radio serial about a wealthy playboy who moonlights as a bandana-clad alter ego capable of clouding the minds of evil men, for a touch of class mingled with populist taste.

You can draw the parallels to Wake particularly in The Shadow episodes starring Orson Welles; the excessively-smug way he speaks as Lamont Cranston gives the audience all the justification we need to judge him, to place him in a comfortable category; yet when The Shadow speaks, the implication is a crucial finger-wagging which reminds us that our judgments are wrong and, more crucially, that it is we who are being judged instead. Often ludicrous and not particularly suave in its execution, Welles’ performances regardless had an earnestness behind them and that resonated with people in a direct and visceral way.

Wake is also similar in its product placement – in the old time radio era, shows only existed because they were regularly sponsored by companies pushing everything from toothpaste and Ovaltine to telephones and tires; Wake, too, wears its endorsements proudly, with Energizer batteries and a Verizon phone being a key to your continued survival. In both cases, nothing is taken away by these intrusions. In fact, unlike most other instances of product placement (their shallow instances in sports and racing games, their bizarre and jarring usage in games like Infamous 2), they actually add a bit to the authenticity of the program. They, like pulp stories themselves, aimed to depict real life in as elevated and sensationalized a way as possible. 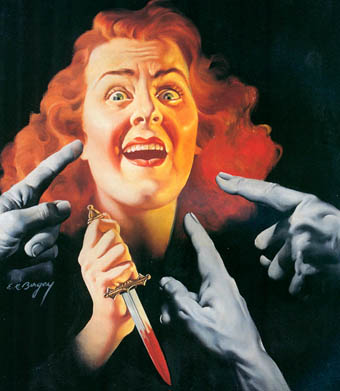 The reason why I’m not bothered by the idea of Alan fumbling with plugging in some Energizer batteries (but I am with Cole McGrath walking by a Subway) is because the weight of Alan’s psychological descent is increased by the decisions he makes. And in the case of the game, it is how those specific batteries and that specific phone, cause him so much grief, consternation and relief. Without making some grand statement about capitalism, it takes on the fact that it exists and that individuals are forced to make decisions within it that can have pretty big ramifications.

Despite those distortions and how they may have romanticized or exaggerated certain parts of life, both Wake and the pulps of yesteryear have a verisimilitude in their dealings with the often complicated nature of life, love, and money. Consider pulp magazine covers- artists grounded their illustrations in a realism that made their fantastical elements all the more pressing, with even the sci-fi illustrators taking careful note of anatomy and expression so as to transmute the fascinatingly uncanny facial gestures men and women trapped in strange lands (and stranger circumstances) found themselves in.

Looking at it that way, it is those human imperfections that give Alan Wake the gravitas it needs to be successful despite its many clunkers; it’s merely been mislabeled as something far more reductive than it actually is. Likewise, because of the way people label it (terms like “disposable,” “rubbish,” “sensationalized”), pulp often doesn’t get the attention it deserves. Which is strange, because none of those terms are inherently negative. By giving the material a fleeting existence, and by exaggerating fundamental human concerns, what pulp really achieves is to replicate those passions, that excitement, those sensations that are so refreshingly ephemeral. Like our strongest feelings, our greatest memories, pulp is transient; it lingers, but changes in effectiveness as we do. Most pulp is gone, never to be reclaimed again. Perhaps, in the long run, Wake may join the ranks, as countless older games have done. Until then, I’ll know it as the twitch of anticipation in my fingers, the bubble of anxiety in my throat and the knife of laughter busting my gut.

The Fabulous Life of Shaun Simon