For reasons not entirely clear to me, I found myself misty-eyed while watching the new cinematic trailer for World of Warcraft: Mists of Pandaria. The clip isn’t a tear-jerker by any stretch of the imagination: it starts as a brawl between an orc and a human. The pair foul the land of the Pandaren with their conflict, so a robed monk steps in to teach them a lesson at the end of his staff.

This happens to me often. I’ll find myself moved to tears by the mere fact that something brings me joy. It has happened to me at metal shows, while watching Kung Fu Hustle and most Hayao Miyazaki movies. Once, I felt a profound sense of transcendence while driving my Olds Cutlass Sierra headlong into a lovely Orlando sunset with Aerosmith’s “Sweet Emotion” on the radio.

I, too, have been overcome with paralyzing sadness. Once, after screening Donnie Darko for the first time, I found myself sobbing uncontrollably. I curled up in my wife-to-be’s arms and bawled for a good 10 minutes with no clear sense of what particular image, instance or message in the movie set me off.

Last week I took Alexis to see Iron Maiden play a set full of classic tunes, nothing newer than 1988. When it came time for Bruce Dickinson to howl the lyrics to “Wasted Years,” I felt the waterworks come again. The song was cool back in the day, but now it makes so much more sense to me – especially at a show steeped in nostalgia. “Don’t waste your time always searching for those wasted years,” he says. “Realize you’re living in the golden years.”

I am pretty sure I wasn’t the only person getting something raw and emotional out of the show. In the aisle ahead of me there were two shirtless men, arm-in-arm, singing every word to every song. They shotgunned joints like free-divers gasping for oxygen, then went right back to singing. In my row, there was a man singing with one arm outstretched, eyes closed, face towards heaven. The woman next to him chuckled at the way he was emoting but he clearly gave two shits about her judgment. 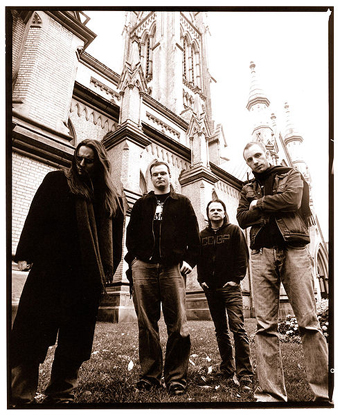 The next night, I caught another metal show by the much-heavier, but not altogether different Agalloch. The Portland black metal band played a fierce, beautiful set that left my ears ringing for days. The crowd was full only of the devoted. When guitarist and vocalist John Haughm opened his mouth to sing or screech, much of the audience joined him – it is a rare feat to memorize lyrics that aren’t much more than a shriek. They stretched their arms out to the sky, some thrusting their hands in Dio’s devil-horned salute. Others raised their hands, twisted into claws. An outsider might laugh at this display, but participating in this exorcism of pent-up emotion brought me, and the others sweating and screaming around me, much joy.

One guy in the crowd near me was channeling a pagan god of mirth. Every time the mood struck him, which was often, he’d cackle merrily. His long, curly black hair whipped forward and back buffeting the backs of his fellow metal-heads. He pranked others by tapping them on the shoulder, then hiding – laughing like an imp as he hid. Despite his distracting antics, the guy also happened to be 100% devoted to the music. He echoed every howl that came over the PA. He and his buddy, a skinny guy with a shaved head, would sneak away often to procure more beer and, most likely, imbibe other substances.

During the band’s encore, a journey through the epic triptych “Our Fortress Is Burning,” the pair returned, arm-in-arm. Loki palmed his friend’s head in hand, the way Zed caressed the gimp. Over the noise the two proclaimed their friendship to each other in a way that bespoke MDMA to me. “You’re my role model,” the shaved acolyte told his mentor. The shaggy hessian pulled his friend in tighter and nodded, stretching his free arm out towards the band and their wall of noise. “The god of man is a failure,” they screamed with everyone else in the room. “And all of our shadows are ashes against the grain.”

I hate to admit it, but I still choke up a little when I go back to that moment, when a room full of scruffy, Los Angeles metal-heads gathered in the dark to open up old wounds or make new ones with the express purpose of feeling something. Anything.