It’s Andy’s house and Andy’s game, so it’s Andy on the drums.

A year from now he’ll buy a simple array of real drums he’ll never play, but for now he’s seated on the edge of the stout wooden coffee table in front of a new, plastic set. I perch on the arm of the adjacent couch. I’m not yet as skilled a drummer as Andy, but I have long, dexterous fingers and the patience to work with the mushiness of the guitar. Someone on the other end of the couch interns as bassist, and occasionally a fourth finds the courage to sing.

In destroying myself physically, I inadvertently destroyed the instrument I used to do so.

Playing as a band creates an empowering dynamic. Andy has equipment enough for a full ensemble, and despite some mechanical shortcomings – the untempered rap of each drum hit threatens to outshout the audio from the TV, causing us to crank the volume to unsafe levels – we play well into the night. By the time we reach the upper tier of songs, we’ve found a collective comfort. Drumming becomes an unwieldy two-man novelty for a few songs; we all try unpracticed falsettos against tracks we think we know.

On our final song, I cap the night’s foolishness. The sole opening chord of The Who’s “Won’t Get Fooled Again” fades into an isolated synthesizer part that lasts roughly 30 seconds before the full band roars back in. Standing at the edge of the room, cocked like a sprinter with the guitar loose in my hands, I strike the chord, let the chunk of plastic fall to the ground and dash to the bathroom down the hall. Through the half-closed door, I hear the synth running its course. I slide back to the living room on socked feet and with wet hands just as our parts surface in unison, and the clack and bang of our novel plastic band again drowns the house.

A year later, Rock Band 2 comes out, and we get fooled again. Andy and I buy bundles with improved instruments: softened drum pads, reinforced kick pedals, sturdier strum bars. We jam as before, locally and online, frequently recapturing the majesty of our first exposure. But 2008 is not an upgrade over its predecessor. Two years removed from organized athletics and ever more entrenched in the lonely machine of high school, I become increasingly despondent and cross the line that separates “big, tall kid” and “medically overweight.” Worst of all, I notice. Depression has a way of spotlighting unfavorable qualities, and soon the only understanding I have of myself comes in the form of loathing and disgust.

These instruments of personal torture remain acute, resisting wear despite their constant use, and stay with me into the next year, and the next. In that time, priorities shift. People get jobs and find new people they might love and want to spend time with. Under the circumstances, the band breaks up quietly. Their equipment sees infrequent use, occupying the space under stairs and the corners of the living room where life used to follow colorful, manageable highways.

When my family buys an elliptical machine for Christmas in 2009, I’m not sure what to make of it. It finds a home next to the bulky treadmill in the basement, which I’ve given up trying to run on. I watch my older, fitter brother put it through its paces, ratcheting the resistance up and down as he forces the twin platforms through their fixed motion. He goes nowhere, but the movement is smooth and hypnotic. Perspiring, he slows, walking without holding the machine’s arms as he offers me a turn.

I first play guitar on the elliptical after several months of using it, uncomfortably, in tandem with Netflix, TV and music, none of which help curb the feeling that I’m not getting anywhere. 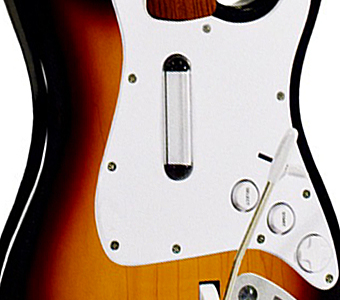 Standing in just shorts and shoes, alone between two instruments of molded plastic, I feel reasonably pathetic. Not much more than usual, but enough to warrant seeing this farce through to its inevitable failure. I choose a low resistance level and a moderate song – Interpol’s “PDA.” I perform surprisingly well on both, taking quick steps in parallel with the driving chord progression. Five minutes, five stars. A little bit of sweat, which trickles down the strap onto the guitar.

I up the resistance, and scroll down the track list to AC/DC’s “Let There Be Rock.” I do a little worse, but this time I feel some graceful connection between each perfunctory step and strum. Something that deadens the labored breathing and sweating and lumbering of the body I hate and exists only to keep moving down that highway. Wiping the sweat from the instrument and from myself, I kick up the resistance a bit more and select Judas Priest’s “Painkiller.”

For the next year, I play Rock Band 2 on the elliptical until there are 35 pounds less of me and I can’t stand not to.

When Rock Band 3 comes out, Andy and I can’t play it as we had the first. We’re both dealing with the vestigial last year of high school, and I’ve made the game a compulsory tool.

I buy it for the new songs, with which I compose fresh workout regimes. They happen nightly, if I can help it, and last anywhere from 45 minutes to 90. It’s a ritual of purification and hell on my guitar.

When we moved into our apartment earlier this year, I ask Andy how much he wants for his near-pristine Rock Band 2 guitar. A broken tab of plastic on the inside of the strum bar has killed my own, until I can fix it again.

Four years after purchase and two since I subverted the game’s purpose for my own, I’ve lost over 45 pounds, each of which I can read in the dismal physical state of the plastic tool I leaned on to get there. Stratums of old sweat stain the black body of my guitar, which lost its faceplate and effects toggle along the way, and each fret button shows patches of wear. The frayed strap remains.

In destroying myself physically, I inadvertently destroyed the instrument I used to do so. When I visit home, I see the weight I’ve lost in the battered guitar and thank it for the trade.