Every year on the venerable gaming website GameFAQs, the community hosts a tournament of champions, pitting classic games against one another to see which one is the Best Game Ever. The tournament proceeds like an NCAA bracket. A pair of beloved titles like Tetris and Sonic the Hedgehog or Metal Gear Solid and Chrono Trigger are matched up and the community votes on which they would like to see move forward. The winners are then paired against one another until only two games remain and the winner of that final vote is crowned the Best Game Ever, at least until next year’s tournament rolls around.

This year, however, there was a bit of a Cinderella story as the indie role playing game Undertale, which was only just released this past September, won the whole enchilada, beating out cherished favorites like Mass Effect 3, Fallout 3, Super Mario World, Pokémon Red and Blue, Super Mario 64, Super Smash Bros. Melee and, ultimately, The Legend of Zelda: Ocarina of Time.

And the GameFAQs community lost their damn minds.

You see, Undertale is a quirky little game that prioritizes peacefulness over violence, community over competition, and love over hate. It features a cast of misfits and castoffs and even depicts a couple of queer relationships. Thus, a certain subset of gamers concludes, it must not be a Real Video Game. Instead, they postulate, it must a kind of Trojan Horse for “social justice” ideology, a Fake Game designed to undermine gaming culture from within by somehow retroactively draining other games of their fun and replacing it with a Serious Political Message.

Check out angry posts like these from the GameFAQs message board: 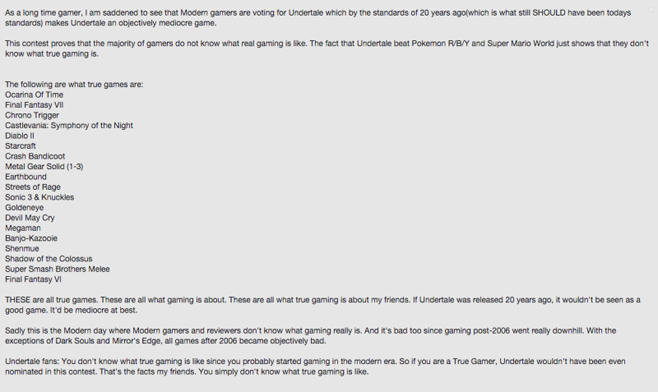 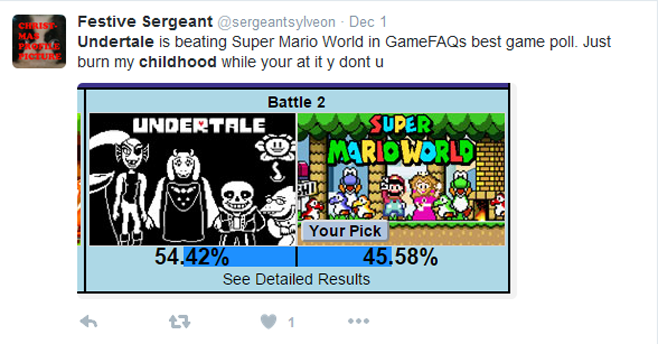 The Battle of Undertale is a part of the larger culture war that has been going on within gaming over the last couple of years, most notably around #GamerGate, the social media clusterfuck that grabbed mainstream news attention when feminist critics and game designers started getting mercilessly harassed and even receiving death threats. These clashes are fueled by the fear that gamer culture will soon no longer “belong” to their particular demographic (the nerdy straight white adolescent male), that its particular brand of escapism/power fantasy will be replaced by politically correct interactive think pieces.

They often feel as though gamer culture was the only space where they felt accepted for who they were and they resent being told that their safe haven is, and has been, exclusionary towards others. They imagine themselves as Outsiders to the mainstream culture but they strictly police the boundaries of their own community. Hence, the complaints about “childhood ruining” and “rigged votes.” The fans of Undertale are perceived as non-gamers who are spitefully injecting their social justice agenda into gaming.

Of course, to anyone who has actually played Undertale, this story makes very little sense, as the game is predicated on an intimate knowledge of old school videogame mechanics. It is a game whose characters know they are in a game, a reflection on what the real moral consequences of the ability to save and reload an entire world until you have shaped it according to your liking might be like. It even features in-jokes for those savvy enough to crack into the game’s code.

If Undertale requires so much insider knowledge to appreciate, then how is it that its fans could be considered anything other than “real gamers”? If the rhetoric around the GameFAQs poll is any indication, the hate for the game is less about nerd bonafides and more about politics. As games become more and more popular across a wide set of demographics, the industry is going to start catering to a broader set of tastes. The Call of Duties and the Just Causes will still be around, but they will be sharing shelf space with games like, well, like Undertale. And a certain set of gamers worry that those new games and those new gamers will crowd them out, just as their favorite genres and aesthetics crowded out potential alternatives for most of gaming history.

But they needn’t worry. Undertale will never replace classics like Super Mario World and The Legend of Zelda: Ocarina of Time. In fact, it stands to introduce those golden oldies to even more people, people who perhaps didn’t feel welcome within gamer culture’s Boys’ Club until recently.

As game fans, we should be happy when an artist pushes the boundaries of the medium. We should hope that games will continue to improve over time. We should hope that every year someone makes something new that might just be the Best Game Ever. The alternative is a medium slowly stagnating, clinging mournfully to its ancient triumphs as it fades into oblivion.

Unwinnable Presents: Strange Stories from the Edge of Christmas