I am, in theory, against nostalgia. The urge to hold up the past in such a way always seems to go hand in hand with a lazy degradation of the present and future. But I am also at the age where nostalgia comes naturally, like a reflex response to the grim reaper’s patient knock at the door. So, it was with a small amount of trepidation that I sat down in the theater to watch Wreck-It Ralph – not to mention that I also felt slightly weird walking alone into what is, ostensibly, a children’s film. 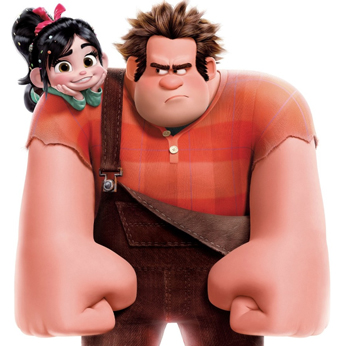 But that’s only half right. Wreck-It Ralph is for adults too. That is why all those 30-year-old characters from Q-Bert and Dig Dug have cameos. The only other people in my aisle were a man around my age and his flock of children. The dad laughed heartily at many of the in-jokes from the first part of the picture. I have to admit that I chuckled along with him. I like to think that I am above the kind of lizard brain laughter that comes out when a spoof feeds you a pattern to recognize. Sometimes you can’t fold your arms hard enough.

I did long, here and there, for a little more wit among the sight gags. Director Richard Moore comes from Rough Draft, the Glendale animation studio that makes Futurama – a show that set the bar for smart videogame jokes well into the stratosphere. Rather, the gags are subtle. Slipped into the background for keen eyes. They’re atmosphere.

I came also to hear John C. Reilly – the man responsible for my favorite comedic character of the past 10 years. And, yeah, Ralph is a bit like Dr. Steve Brule. He’s a loser and a sad sack, but he never once said, “dingus,” so I have to demote at least a half star from the movie’s final score.

For me the best moments in Wreck-It-Ralph happen in the film’s second half, when Ralph helps a glitchy racing game reject get into the qualifying race in the Sugar Rush arcade game. There’s some good drama between Ralph and Vanellope Von Schweetz – they forge an alliance, then a friendship. Ralph has to make some tough decisions around Vanellope, who, because of her glitchy disorder, is treated like an outcast. It is good stuff, to be sure.


Those digital personas, be they friends, role models or skins we wish to inhabit, are far too often preferable to our real-life alternatives.

But there’s another relationship in the game that was more interesting to me. One of the patrons in Wreck-It-Ralph’s arcade is a scrawny girl with dorky pink glasses – Disney fans have dubbed her Moppet Girl, but I am sure she has a name. She floats from machine to machine looking for something to play and is immediately drawn towards the gaudy pink of Sugar Rush. Sadly, she is rebuffed by a pair of dorks who insist on bogarting the machine (and embodying the worse impulse of the gamer tribe).

For a moment, the dorky young girl seems to connect with Jane Lynch’s Sergeant Calhoun – the gruff, Gears of War super soldier from Hero’s Duty. But, in the end, the girl finally gets to put her quarter into Sugar Rush and sit down behind the wheel. The connection between her and the spazzy-yet-gifted Vanellope Von Schweetz is immediate and primal. It’s this bond, between young, awkward loner and imaginary digital character, that trades cheap nostalgia for a true, honest longing and appreciation. It’s this moment – a knowing expression of why we play games – that really made me feel that ache. Because those digital personas, be they friends, role models or skins we wish to inhabit, are far too often preferable to our real-life alternatives.