It has been too long, maybe a year since I talked to Jesse. We used to be tight way back when.

Life happened. I moved away. He got married, got busy. We grew apart. I thought Jesse was doing all right. He was loved, traveling the world, slowly making his dream projects come to fruition.

Turns out I was wrong about all that.

Before I get to that, I have to tell you why Jesse matters to me. He’s my friend, of course. We met in college in Orlando. He was four or five years my elder. Like me, he was a Cuban-American who never felt like he quite fit with the rest of his family. Like me, he was a creative, obsessive type searching for something different, meaningful and satisfying to do with this life.

I’ve always had a thing for big brother figures. Maybe that’s because of the way my dad bailed on us, but I don’t think that’s quite it. Before all that happened, my older cousins Chuck, David and Francis were my idols. They were strong, handsome and good at sports. They did cool things like listening to punk rock and riding motorcycles. They were the men I wanted to be.

I want you to hold this for me. I am not giving it to you, because it is too special to me. Consider this a loan…someday, put this gun back into my hands.

Jesse was more like the man I was going to be. He, too, was an aspiring film student. We swapped laser discs and dished obsessively about articles in Premiere and Movieline and Film Threat. Jesse loved music as much as I did, so we went to shows together and stayed up late watching 120 Minutes. When Kurt Cobain died, Jesse was the first person I called.

It was Jesse that got me high for the first time. I was cross-legged on the carpet in his apartment watching his VHS dub of that Taming of the Shrew episode of Moonlighting when the THC hit me. I tripped so hard that I was sure Jesse had spiked my soft drink with acid. But Jesse was together and easygoing and made me feel all right about my crazy high. The feeling wasn’t forever. I wasn’t going crazy. I wasn’t going to die.

Somewhere along the line, Jesse lost that grip. He and his girlfriend planned to move to Portland and that was good. They were packing up their Jeep and were ready to go. They’d married earlier, at a private, largely unofficial ceremony, under the dangling Spanish moss of a downtown Orlando park.

In the dark before they left there was a wild panic in Jesse’s eyes. He was terrified and there was nothing I could say to help him. When Jesse left Orlando, I put on a brave face, but I was very sad to see him go. So I gave my friend something valuable to me – Han Solo’s blaster. It was one of my first Star Wars toys and the one that held some of my fondest memories. I’d lugged the thing, along with all my other action figures and spacecraft, around the world and back. I gave the precious thing to Jesse and told him, “I want you to hold this for me. I am not giving it to you, because it is too special to me. Consider this a loan…someday, put this gun back into my hands.”

We hugged and waved goodbye and didn’t see each other for quite some time. 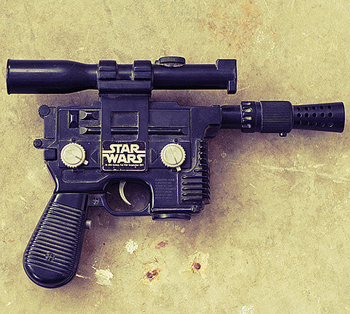 All the water under that bridge brought many difficulties for the both of us, but I feel like Jesse did more of the hurting. Every time we talked he sounded less like the optimistic, enthusiastic Jesse I knew and more like somebody beaten down and hardened by disappointment and betrayal.

Through all that Jesse kept his promise. Years later, he returned the plastic toy to me. I was happy to see him, but pained at how deeply sad he seemed. He’d carried that blaster through life and loves and heartbreaks but I couldn’t help but feel like somewhere along the line he’d left some of himself behind. There was so much bitterness and resentment now. And anger. Jesse was once the one with the even keel, smiling calmly and talking me down from a pot brownie high. Now, I found that I was the one constantly talking him down from ledges and out of fights.

Like I said, things got better. Jesse remarried. He had irons in the fire – exciting film projects poised to happen. Jesse traveled with his new life, spending a ton of time in Hawaii, a place that he clearly loved.

I tried to reconnect with him. I went to his place in Hollywood to watch movies, talk about music, but we never seemed to connect. We shared so much before. I came to realize that as time passed we had less and less in common.

I loaned him games like Batman: Arkham Asylum and Red Dead Redemption, hoping to get him excited about something new, hoping to get him to share enthusiasm with me again – to reforge a connection. My attempts never took hold. I’m pretty sure he never tore the shrink wrap off.

If Jesse was happy in his new life, I was okay with the fact that we rarely talked, didn’t share the same stuff we used to.

But Jesse was not happy. When he called me last week, my old friend was in a rage. Paranoid, even. The worst I’d ever heard him. He ranted to me. Spat threats of violence and made nihilistic blanket statements about life and love and everything that matters. He sounded like he just wanted to give up. To cut and run and take all his hurt somewhere where nobody could ever get to him.

Jesse wanted my help to do this thing and I told him, “No.”

He wanted to cut and run and take all his hurt somewhere where nobody could ever get to him.  Jesse wanted my help to do this thing and I told him, “No.”

My greatest wish for Jesse is that he hospitalizes himself. That germ of sadness and hurt inside him has metastasized into something ugly. Something sick. I want Jesse to go somewhere safe, where people who know what they’re doing can help him find a healthy way to feel better about all those things that make him so angry, so sad and so different from the man I used to look up to. I want to put Han Solo’s blaster in his hands when he goes there and make him promise to give it back to me when he comes back.

That’s not what Jesse is doing or where Jesse is going, though. I don’t think I can help him any more. The Jesse that got me high and talked me down might never come back.

Jesse called a couple of days ago. He found a way out. Bought a plane ticket. He’ll be flying to Portland soon – he’ll get away from all the shit in Los Angeles that is driving him to distraction, but he’s still packing up all that anger with him. I fear for my old friend, but I still hold out some hope.

During that last call Jesse told me. He is finally playing Red Dead Redemption.

Why the Videogame Western is s One Horse Town