It must feel really good to be mad about Mass Effect 3 right now because, though you sound crazy and unreasonable, you’re certainly not alone – you are among a flock of nuts.

For part of 1997 I felt like a crazy person, but I was alone in my craziness. That’s because I spent an inordinate amount of time trying to convince anyone who would listen that the movie Starship Troopers was a brilliant, biting work of satire that skewered fascism, Beverly Hills 90210 and the contemporary action picture. Nobody was having it. Starship Troopers was CG-laden junk for brain-damaged teenagers. Mastrapa has just been drinking again. 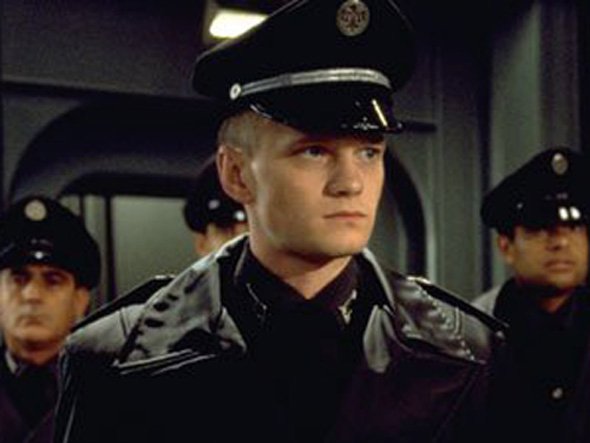 Later, when the DVD for Starship Troopers was finally released, I felt vindicated in my reading of the movie. Director Paul Verhoeven and writer Ed Neumeier confirmed their intentions on the disc’s audio commentary. Of course, one could say that intent doesn’t matter if the message isn’t clearly received by the audience. But then another one, me, would say that it isn’t the artist’s fault that the audience is so fucking thick.

Admittedly, Verhoeven can be somewhat confusing to folks. Almost nobody groks Showgirls for what it is — a modern take on depraved Russ Meyer freakouts like Beyond The Valley of the Dolls. Criminally, most people don’t know and love the beautiful trash of Meyer. So how could they ever be expected to identify such a grotesque homage as anything but an isolated act of mainstream pornography?

We’re all here this week (and not busy complaining about Mass Effect 3) because RoboCop has come to be appreciated for the killer work of satire that it always was. In his 1987 review of the picture Roger Ebert gets at the nut of the Verhoeven problem before the director ever produced his most befuddling works. “His movies are not easily categorized,” Ebert says, noting that RoboCop is imbued with slapstick comedy, romance, philosophy and “pointed social satire.” Then, as now, RoboCop was a complete package.

Back then I wasn’t capable of reading RoboCop quite as freely as I was willing to approach Starship Troopers. I got the social satire stuff. I was prepared for takedowns of Reaganomics by comics and sci-fi novels, but it wasn’t until I listened to the commentary on the RoboCop DVD that I started to understand what a rich text the movie really was. The biggest revelation comes prior to the film’s final showdown, when Murphy faces off against Clarence Boddicker in the scrapyard. The shots are almost a throwaway. 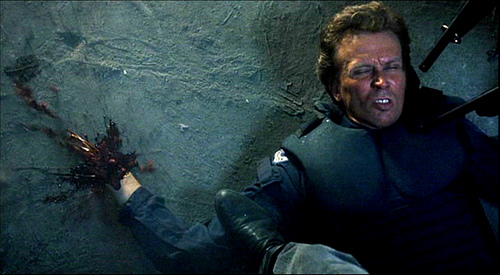 I had never seen it, but once I heard Verhoeven mention his intentions, I see the imagery there as clear as day. Robocop shouts, “Clarence,” and shuffles across the top of a vast, muddy puddle, stopping Boddicker just before he can put a bullet in Nancy Allen.

He walks on water.

From there it isn’t hard to look back at the arc of the movie and see all of RoboCop‘s Christ-like moments.Murphy’s gruesome death plays out like Jesus’ – especially that horrifying moment where his hand is blown to bits by a shotgun blast. The scene is the opposite of subtle, but how else would you communicate the cruelty of crucifixion in the context of an ’80s action picture? Murphy’s stigmata explodes in the  profane red gout of a special effects squib. Then there’s Murphy’s ensuing resurrection and return as savior of Detroit. That’s where the comparisons seem to end, because Murphy, though a principled police officer, isn’t the social and spiritual revolutionary that Jesus Christ was. He is an avenger and protector. He is the culmination of science and society, with all their flaws written into his DNA and machine code.

Paul Verhoeven doesn’t believe in miracles. In addition to being a challenging filmmaker, Verhoeven is also an amateur scholar in the life of Christ. In his book, Jesus of Nazareth, he lays his feelings on the topic out very clearly. “Jesus is dead,” he writes. “His fire has been extinguished like that of Mozart and Einstein. His body did not rise up from the grave.” But his declarations don’t preclude the notion that the man had the power to change the world, just like Murphy (with a little help from OCP science) was able to save his city.

In Verhoeven’s eyes, Christ was a confused  mortal, deluded to believe that he was the creator incarnate. “If anything can be considered to be a miracle,” Verhoeven says, “it is this paradoxical fact: that his mistaken view of reality led to the most significant ethical revival in the last two thousand years.” 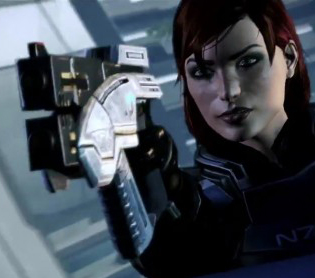 Call me crazy, but I don’t believe in miracles either. Who needs intervention from the hand of God when we live in a universe so unpredictable and diverse that meaning like this can be found, picked apart and mulled in a silly movie about a half-man, half-robot who keeps a gun in his thigh? I often gripe about the Internet, but if there’s one reason to feel blessed, it is that one no longer had to feel alone in one’s craziness. There’s always somebody else, somewhere, reading improbable notions into texts that don’t seem like they ought to carry that kind of meaning. It pleases me greatly that the official Mass Effect 3 thread on NeoGAF is subtitled, “Space Jesus Returns.”

I loved Commander Shepard’s death by re-entry at the beginning of Mass Effect 2 and her subsequent resurrection. The fact that Cerberus dubbed the effort to stitch Shepard back together “The Lazarus Project” was cute, but maybe BioWare needed to be a little more heavy-handed with the Christ stuff. The audience, like I said before, is dense. And I’m guessing that half the reason that people are so ticked about the end of the game (shut up about lies, plot holes and that other crap, please. I’m not interested) is that the Mass Effect audience doesn’t want a traditional die, come back and disappear Christ figure. They want Murphy – a RoboChrist who bites the dust then comes back and sticks around doing good until his batteries run out.

Pretension +1 is a weekly column about the messy intersections of life, pop culture and video games. Follow Gus Mastrapa on Twitter: @Triphibian.