It seems like a million years since I last  played Quake 3. I can still remember sitting in my Los Angeles apartment, huddled in front of a monitor, hearing Bender tell my opponents to bite his shiny metal ass. I wasn’t terribly good at the game – I’d occasionally hit a winning streak and rain death down from the skies – but I did derive great pleasure from the game’s adrenaline-addled pace. I spawned, I acquired weapons, I killed and I died. I played until my eyes were bleary with gibs and the sound of rocket explosions rang in my ears. I took extra satisfaction from downloading every character skin and sound pack I could get my hands on. On a good night, I’d find myself in the midst of a pop culture slaughterhouse. Boba Fett, Krusty the Clown and RoboCop went toe-to-toe, spilling blood in ways that story bibles would never allow.

No matter how many times I see that particular kind of anarchy happen, I am still thrilled.

Something really cool and magical happens when the walls between universes break down. That’s because the collision of worlds taps into to our earliest moments of play – when there were no rules and every toy was free to interact with the others. You have to seriously question the imagination of a kid who never pit a Barbie doll against the Death Star nor built Lego monster trucks for the Smurfs to ride in. Some of my favorite creative works – stuff like The League of Extraordinary Gentlemen and Time Bandits – feel like they are completely unrestrained by the limitations that seem to hobble other entertainments. Recently the science fiction novel Ready Player One and the extraordinary horror flick Cabin in the Woods treaded on similar ground and left me feeling energized.

Making something like this happen is harder than it might seem. My buddy Mitch, who works in a legal capacity for the Disney entertainment monolith, once told me that veterans who worked out the legalities of the Kingdom Hearts licensing shudder like Sideshow Bob taking a rake in the face at the merest mention of that popular videogame. It is the difficulty of locking down these permissions, agreements and contracts that keep our favorite characters hemmed into their own worlds – the clever find workarounds, the ambitious knuckle down and make the paperwork move where it has to. And sometimes, somebody particularly brilliant comes up with an idea that throws a wrench into the whole system.

In 2005, I attended the D.I.C.E. awards in Las Vegas. I was rooting for Katamari Damacy to clean up in all the categories it was nominated, but I failed to realize that the person sitting next to me represented the team at Cryptic who had created City of Heroes. I 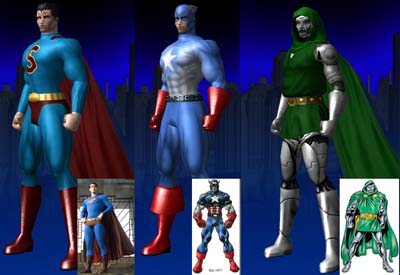 gave short shrift to that game’s contribution back then. But now, when I look at how amazing that game’s character creation was, and the way that it enabled players to fill the game with characters from throughout pop culture, I realize that I should have been rooting (at least a little) for the cats at Cryptic. Marvel eventually tried to sue the makers of City of Heroes for allowing players to create “infringing” characters, but once all the legal dust settled and the lawyers got paid, Cryptic and Marvel made nice and worked on a game together. I guess that means that everybody lived happily ever after.

I don’t want to spoil too much about Cabin in the Woods, because there is something really cool about the way that movie takes you unexpected places, but one of the many reasons why I love that movie is because it gleefully blurs the lines between universes, paying homage where it must and name-dropping where it can. That movie, though somewhat nihilistic, also taps into something childlike and unfettered. I think this state of mind must come naturally to Alan Moore, a writer who is extremely promiscuous when it comes to his characters – he borrows from literature, pop culture and legend freely. He intermingles heroes and villains in unheard-of configurations, pitting them in fights and embroiling them in torrid sexual affairs. He breaks down the walls between worlds and lets their denizens run willy-nilly. No matter how many times I see that particular kind of anarchy happen, I am still thrilled.

If I ever create something worth talking about, I hope that it taps this rich, woefully under-exploited creative vein. We can’t let Alan Moore have all the fun.

Pretension +1 is a weekly column about the intersection of games, life and the rest of pop culture. Follow Gus Mastrapa on Twitter: @Triphibian.