Turkey is the smallest of our four dogs. He’s a scruffy mixture of terrier and chihuahua. It has been said that he looks something like Master Splinter, but because of his breeding and size, he behaves with none of the zen-like calm of the Teenage Mutant Ninja Turtles’ mentor. No, Turkey is high-strung and easily set off. That’s mostly because he hates his position in the pet hierarchy – the bottom. So Turkey spends much of his day trying to harry his way up the ranks by snarling, humping and yipping at his competitors. The poor little dog never gains any ground. He only succeeds in annoying his masters with his shrill, piercing bark. 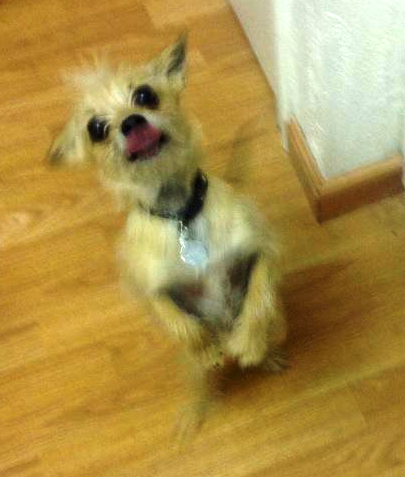 I returned his bad behavior in kind, bellowing in anger for him to shut up. I began a passive-aggressive campaign to offload the little mutt, hoping that some friend or family member might give him a better home, because when Turkey is on his own he is sweet, kind and quiet. Without bigger, dumber dogs to feel threatened by, he is much better behaved. He would be happier as an only dog.

That’s the easy way out, of course.

The other night, as I was feeding the dogs, I found myself ready to holler at Turkey every time he nipped and yapped at the other pets in the scramble to chow down. I haven’t liked the person I was becoming around Turkey, lashing out angrily rather than showing compassion, patience and intelligence. I will be a father soon, and this is not the way I would like to behave. So, rather than leave little Turkey in the chaos of dogs where he is scared and insecure, I picked him up and carried him above the fray. In my arms he doesn’t bark or instigate fights. He just clings to me, waiting silently for his turn to eat. All this time, I have failed Turkey by leaving him, unaided, in a situation that gives him great anxiety.

Recently, Riot Games, the makers of League of Legends, explained how they were using science and design to encourage better behavior among their players. By the simple act of switching their game chat off by default, they saw a decrease in negative chat and an uptick in helpful communication. This isn’t some insidious kind of control or phony gamification of good behavior. Riot simply put in a road bump, giving players that extra moment they needed for their empathy to kick in.

It strikes me that this responsibility falls upon the shoulders of all makers and masters, all creators and shepherds. Those of us with the power should, and must, make a world where the influence of fear and uncertainty are minimized, where people are free to be their best and where freely-made choices lead to betterment more often than destruction. Freedom is cool and all, but what’s the point of winning the libertarian high ground when our only prize is the right to be shitty to each other?

Freedom is cool and all, but what’s the point of winning the libertarian high ground when our only prize is the right to be shitty to each other?

If God were real, this would be his greatest failing. He has made a world where the path of forgiveness, peace and generosity is the hardest way to live, where fear is the greatest motivator and patient love the rarest of all commodities. If the universe is the product of intelligent design I wish we’d had a more thoughtful creator.

Turkey’s uplift has continued. Once I got the feeding sorted, I set my aim on the early morning ruckus caused by hungry dogs. Half past four is much too early to be dishing out kibble. We could sleep through Lulu’s occasional desperate scrabble against the closed bedroom door, but Turkey’s shrill barks – an effort to police Lulu’s naughty behavior – is another story. So several nights ago we let Turkey roam the house free after lights out. There was the chance that the little guy might eat some cat turds out of the litter box, but that was the risk we were willing to take. Our reward was a much more peaceful morning and the nighttime company of a grateful little dog who, like the rest of us, just wants a little bit of peace.