The only family vacation I can remember with any kind of reliability happened during the summer of 1981. I was nine years old. We were shacked up in a beachfront hotel in North Miami Beach – one of those flamingo pink joints you sped past in Grand Theft Auto: Vice City. Now that I think about it, my family wasn’t really much for vacations. All of our big treks had a purpose. We drove cross-country multiple times, peering into the Grand Canyon briefly while hauling our ragged selves from old house to new house. And when we did pack up the station wagon, it was either to go fishing or make a sweaty pilgrimage to Disney World.

This trip to Florida was also part business. We owned a rental property in the area that required paint and maintenance, but this trip had also morphed into a kind of family reunion for my father’s family. My abuela Rosa and abuelo Gustavo were in from Chicago. My aunt Nuirka and her virile sons, Charles and David, were there as well. Local family, of which a Cuban can expect to have much of in South Florida, also paid visits that week. The story everyone likes to tell about this particular family outing happened one evening on the beach.

My real Miami story is about delinquency – an adventure that would end in a sleazy arcade and in dutch with the adults.

Our clan was enjoying the sea breeze under the sodium-orange glow of streetlights. The kids were playing Ghost in the Graveyard — a variation on Hide and Seek that finds the seekers’ numbers grow with every tag. My abuela, Rosa, was already an old woman. Her frail hands were painted with a giraffe of liver spots, but, in what I can now see as a testament to her adoration of us kids, she had agreed to play our game with us. She tried to catch us, but we’d dart across the the sand, weaving between the clumps of sea grass without tire. Of course, we should have seen it coming when Rosa doubled over, clutching her heart. The game came to an abrupt stop. My father and aunt rushed to their mother’s aid. But Rosa, staggering and gasping, pushed them away. Chuck, my older cousin and master of Ghost in the Graveyard, ran to Doña Rosa’s side and was thanked for his loyalty with a grin and a slap on the shoulder. “Tag!”

Our parents had always spoken, in the hushed tones of a survivor, about Rosa’s wily nature and her deadly accuracy with cast-iron frying pans but that evening, as everyone sighed in relief, we learned some of the truth about our grandmother. Abuelo chortled in that jolly, knowing way that always reminded me of Jabba the Hutt. Our naivete amused him.

Though I cherish stories of deception, my real Miami story is about delinquency – when Charles led me and my sister on an adventure that would end in a sleazy arcade and in dutch with the adults.

It was clear that Charles, already a teenager, was getting stir crazy in the hotel. After a few hands of Uno with the grandparents he was done hanging around. And I was game to follow. Not because I was over the idea of chilling out in a beat-up motel, but because I idolized my older cousin. Much later he’d introduce me to skateboarding and punk rock, but at this early date, his lesson was to be a different one.

Somehow, Charles convinced the adults to let him take responsibility for me and my 7-year-old sister, Michelle. We’d hop a bus and check out one of Miami’s shopping malls under his watchful eye. That jaunt turned into a day-long journey. We navigated the city’s shitty public transportation system, supplementing its spotty coverage with sweaty hikes across yawning parking lots. Later we’d find that my sister’s feet had become bloody from all the hoofing. True to character,  she had been stalwart and silent – along for the ride. A quick pass of the mall told us there was nothing for us there, but the nearby movie theater, with Raiders of the Lost Ark and The Great Muppet Caper on its marquee, had much to offer. We watched both movies, savoring the air conditioning and sugar rush of entertainment. The sun was setting when we caught our return bus and we still had no inkling that we’d done any wrong. 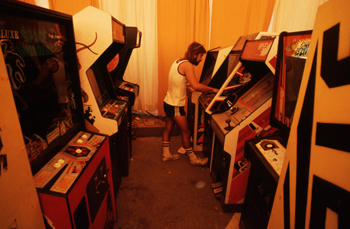 before cell phones, every hour that children were on their own was an hour of increasing anxiety for the adults in their lives. By the time we got back to Miami Beach, the grownups were more than nervous about our safe return, but under Chuck’s bold leadership we were oblivious to such things. The taste of freedom was on our lips and we didn’t want to wipe it away. So, when we stepped off the bus onto Collins Avenue, we didn’t rush back to our parents to assure them that we were okay. We had no idea that we were missed. Rather, we walked into the nearby arcade and gorged on coin-ops. I marveled at the Black Knight pinball table and the crazy technology of the magnetic save that seemed to grab the silver ball as if by magic. I watched a man play Star Castles for a good twenty minutes, attempting to grok the intricacies of the controls, before committing my own quarter.

If there’s any one thing that you young folks should understand about videogame arcades in the late ’70s and early ’80s is that they were often adult places, crowded more by skeevy-looking Dazed and Confused types and working stiffs looking to decompress. Before Chuck E. Cheese and Nintendo jerked the medium into the realm of the toy, videogames were a waste of time enjoyed by slackers of all ages. That night, before our parents came to drag us by our ears and teach us a thing or two about responsibility to others, we were practicing what it was really like to be an adult and answer to no one.