As Metro 2033 moves underground, the camera pans out from a postcard of Big Ben and the Venetian canals, stuck angled to the walls of the protagonist’s subway cell. Someone strums a few baroque guitar chords and picks a melody, leaving silence between each note. I’ve already known I’m playing in bombed-out future Moscow, and the bleak soundtrack confirms it.

This is more medieval than high fantasy, a kind of genuine medieval that’s more history than fiction. The sense of isolation and claustrophobia that will stick throughout the game, even in the above-ground chapters, sets in as the guitar stops, and I sit up. From outside of the closet-sized room come the sounds of a baby crying, deep snoring, and painful moaning. If this game didn’t look so good, I’d call this downright unpleasant.

Metro 2033’s beginning reads like a book because it’s so detailed.

Facing the door, I look to my left and see a dusty map of the subway, Cyrillic characters sprinkled across it. Next to a no-smoking sign (dark irony), a plant (light irony) and photos of real people plastered to the wall, I find the first interactive object – a lamp. Across the room is another, an oil lamp that I can hear myself blow out. The mapped area of the room that allows me to interact with either of these lights is larger than the lights themselves. I was meant to try this, to see that I could manipulate lighting in the environment, and that it would have a practical, visual consequence. I turn both lights back on, just to be safe.

A guitar, perhaps the very same, sits on a couch in the corner of the room. It’s also interactive, but the chords and notes are randomized. I can never get it to sound just like it did before, that antiquated, haunting melody. I fumble with it a bit more, sounding untrained and inconsistent, then abandon it. There’s a radio on the floor that I can turn on and off. Oddly enough, it causes some screen tearing when it’s on.

Above the desk is a bookshelf holding multiple copies of Darwin’s treatise on evolution, The Origin of Species. There’s also a copy of the book Metro 2033 (the game was inspired by the real book by Dmitry Glukhovsky), and across the room is a Russian poster for the book series. To the right are a couple of gun schematics like a young boy’s cult homage to violence. I wonder if developers think of me like that, then realize they that didn’t conceive of this lonesome subway hovel for me; Dmitry did. 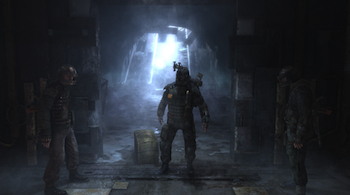 Metro 2033’s beginning (not to be confused with the chronologically out-of-sequence surface scene in the prologue) reads like a book because it’s so detailed. 4A Games used the objective of “follow the slow, jabberjaw leader” to support those details, to guide the player towards that cracked-open door with the hazy blue light, the sick soldier on the bed, the grimy assault rifle on the desk next to the empty bunk. For those looking for a compact story in atmospheric vignettes, the first 12 minutes of Metro 2033 can overwhelm.

I am trying to listen to the young girl timidly asking about her father over her screaming mother, and the eye slot in the heavy steel door calls to my character by name. Some dark humor and a bit of cheesy banter later and I’m confronted by the moans I heard from the small room down the hall. I’m in the medical ward, the dim lights and sounds of heavy, labored breathing weighing down on me. I see cloth partitions separating the bleeding victims, and with a little investigation learn that cloth behaves in this game like it does in my house, more or less. Cloth textures AND dynamic lighting AND voice actors sobbing in Russian? Color me illusioned.

Throughout this 4-minute journey, I’ve been inundated by whispered conversation about the “Dark Ones,” at least enough to know they’re bad news and probably related to the werewolves I gunned down in the prologue. Already having a glimpse at these nemeses in my full battle gear actually ruined whatever suspense this scene was trying to build, even after hearing some delusional raving and a terrified scientist. “The Dark Ones will kill us all,” he says, and I see a bloody sink. Video games love bloody sinks. 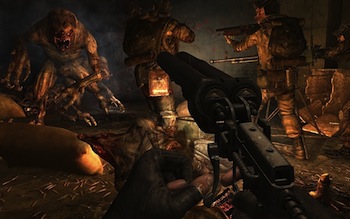 I join my leader with his bad English-by-Russian accent, as the game’s resident badass is allowed through the thick doors separating the community, Exhibition, from the surface. For a moment I see sunlight (really it’s just a lens flare à la Fallout 3’s “Welcome to the Wasteland,” but more fleeting) and just as quickly we’re back to oil lamps alone. The “adults” discuss their options (NPCs can make me feel like a child), then the alarm sounds.

I grab a few bullets, a revolver, and see a furry lump with shining eyes drop through an air vent as the room clears and emergency lights spin. The shooting starts.

The second time through Exhibition isn’t too different from the first. I walk through a market, trade bullets for bullets (ammo is the game’s currency), collect my gear, check out some very real-looking pigs, and see four more copies of the Metro 2033 poster (the gag is starting to wear thin). I’m introduced to what I would call the game’s poverty mechanic, whereby the apparent scarcity of ammo suggests a conservative approach to combat. The guns for sale have impressive-looking silencers screwed onto the barrels, and (by intentional design) I can’t afford them.

The men in this tunnel are preparing to leave, to do something in a confined underground space they will literally never leave. One of my comrades promises that he’ll return the book I lent him some time ago, goading me with a jab. I sidle around him, jump on a crate, and peer down to see the book he’s holding to see if I even want it back.

Discover the texture of Dan Crabtree’s tweets on Twitter @danrcrabtree.