“I’m going to hack your IP address and swat you.”

As a long time gamer and a fan of League of Legends, I’ve been trolled before.  I’ve been called nasty names and heard many a disparaging comment about my mother.

But no one had ever told me they were going to try to get the police to murder me on their behalf before.

For those of you who haven’t heard of it, swatting is a “prank” in which some doofus who fancies themselves a leet hacker makes a fake 911 call in hopes of getting a swat team to kick in the door of their victim.  According to the FBI, swatters often use technology to make the calls seem credible, for example, making them seem to originate within the targeted residence.  And besides squandering law enforcement resources (these fake calls can cost emergency departments as much as $100,000 per incident), these attacks have the potential to be deadly dangerous for both police and for victims.

Take the story of Max and Victoria, a couple who streamed their Call of Duty games on Twitch:

It was dark outside by this point, and Max stepped out of the room where they were playing. When he left the room, he noticed shadows of people wielding huge guns and bright lights.

This is when Max realized his family had just been swatted.

“I was just freaking out,” he said. “In my head, I was like ‘The kids, the kids! Put ’em somewhere!’ [The police] were coming up. I didn’t want to get near the window anymore. I can’t be near the window because if anything is called out, I’m a target.”

Max was terrified. If he made one wrong move, if he gave the police reason to believe he was up to something, the police might start shooting.

The police told Victoria to send her husband outside, but the two decided to leave together.

“The first thing I said to my kids was ‘stay there, and if anybody comes up, listen to instructions,'” said Max.

As the two ventured out, they were greeted by guns and a chorus of “Put your hands up!”

“It’s an experience to have so many guns pointed at you at one time,” said Victoria.

Max immediately went to the ground, while Victoria protested. Not wanting to cause any confusion, Max followed any instructions thrown at him. To her, the situation was ridiculous. The police relented and told the couple to walk over. They were both immediately handcuffed.

For police, the next step was to clear the house. This meant heading inside, guns and all.

“It wasn’t enough feeling violated over everything that happened,” said Max. “Now, the entire police department, the SWAT team, just checked my house.”

The kids were asked to put their hands up.

“They didn’t know what to do with the baby,” he said. “She’s flapping around. It made no sense to her.”

As Max and Victoria waited for the police to finish their sweep, he thought of the “what ifs.”

“They’re pointing [guns] on us, ready for, if anything happens, [to shoot] for their life’s sake,” he said. “That’s the scary part of it. They’re humans. Humans make mistakes all the time.”

Another swatting victim, Air Force Veteran and Runescape streamer Joshua Peters, had this to say to the viewers who gleefully awaited a spectacle:

I see you posting my address.

I had police point a gun at my little brothers because of you. They could have been shot, they could have died. Because you chose to swat my stream.

I don’t give a s— about what you have against me, or what I did to you. For that I am at a loss for words. Your gripe is with me. But do not involve my family in this. They don’t deserve it.

Thankfully, law enforcement is starting to take these kinds of threats seriously.  For example, in Louisiana a 15-year-old swatter was convicted of domestic terrorism.  In his fake 911 call he told emergency dispatch “I just shot and killed four people. If any police enter my home I will kill them too.”  He was angry because his target had repeatedly bested him at Battlefield 4.  And last year, in California, a 13-year-old boy was arrested for participating in three separate swatting incidents.  He told police that he sent armed me to kick in the doors of his teacher, a classmate, and a “Minecraft-rival” because “he felt he was wronged.”

Politicians are taking notice as well.  A state’s attorneys in Illinois “recently proposed state legislation that would require defendants found guilty of swatting to pay back municipalities for calling on emergency responders. Swatting victims say they have been able to prevent repeated raids at their homes by asking the police to note in records available to emergency dispatchers that they are likely targets.”  And on the national level, Congresswoman Katherine Clark proposed a bill called the Interstate Swatting Hoax Act of 2015.  Soon after, she herself was swatted.

In the moments after I received my threat, I was unsure how to proceed.  Part of me was absolutely certain that my troll was just that and nothing more, that some kid was trying to show off how edgy they were by evoking the scariest thing they had ever seen in the gaming community.

But another part of me feared for the worst.  Kotaku’s Patrick Klepek interviewed a teen who claimed to be a swatter and who demonstrated a chilling lack of understanding of the potential catastrophe that this particular “prank” could create.

People think that getting swatted is the end game of the Internet. You’re done for. It doesn’t matter. As long as you don’t have anything to hide, it really doesn’t matter. If you have weed, put it under your bed or something. It doesn’t end your life. You’re fine. Are people gonna tweet at you and say “oh, your door got kicked in?” Yeah. Sure. But, I mean, you’re still gonna go on about your day like you would have the day before. Once a month, are you gonna have to take take 30 minutes out of a Saturday night to make sure that your door’s not getting kicked in? Sure. But that should be the cost of streaming. That should be the cost of being a YouTuber.

13 year olds can fuck up your night. Don’t give a shit about it. Even if you care, pretend not to. That’s gonna make you the joke. That’s gonna make you someone they can go back to next Friday when they don’t have to go to school in the morning. The best thing you can do, even if you’re scared shitless—which, honestly, I’d call you a pussy for—but even if you’re scared shitless and a SWAT team is going to come to your house, you need to play it off like you don’t give a shit.

I live with roommates.  We have three dogs and two cats between us.  What if some snot-nosed brat really did decide to call something in?  I was not willing to risk our safety.  So I called up my local police department.

“Hi.  I’m not sure if this is the right phone number.  But I’d like to report a threat.”

“Is this an emergency?”

“This is Detective [REDACTED].”

“Well, this is going to sound a little strange, but… have you ever heard of ‘swatting’?”

He chuckles.  “Well, I’ve heard of swatting a fly if that’s what you mean.”

“No, it’s a thing people do on the Internet.  Where they try to get a swat team sent to your house under false pretenses.”

I start back at the beginning.  I explain that I was playing an online game frequented by people from all over the world whose names I didn’t know.  I explained that one player had threatened to send a swat team to my address in hopes that they would shoot me.

“Did you give out your address online?”

“No, he said he was going to trace my IP address.”

“He was going to hack me and figure out where I live.”

The detective was kind and patient.  He thanked me for calling in the threat and told me he would “make a note in the system” should someone ever try to call something in.  He reassured me that they had dealt with other kinds of prank 911 calls before, though those had originated locally.

I also emailed Player Support at Riot Games, the creators of League of Legends.  Riot has been trying hard in recent years to curtail the toxicity of their community.  I hoped to get my tormentor banned or at least suspended and I joked to a friend that “if I get killed, maybe the police could call up Riot and get some info on this guy.”

Perhaps I was being overly paranoid.  Perhaps that is why swatting has been categorized as domestic terrorism: because it is a way of using fear and uncertainty as a weapon to destabilize a target.

Riot emailed me back what felt to me like a canned response.

I’m really sorry that you’re having a less than stellar game play experience. Believe me, you are not alone with these problems. I too have had to deal with these types of players.

Thank you for bringing this player’s conduct to our attention. We will investigate their behavior and take the appropriate actions. If you feel anyone’s life is in danger, please do not hesitate to contact your local authorities.

It isn’t very reassuring to get advice about what to do “if you feel anyone’s life is in danger” from someone named Swizzle.

Sometime later, I logged onto the League of Legends client and found this message waiting for me: 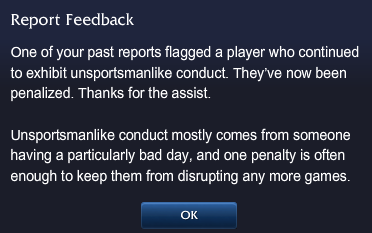 This is nice, but again, a bit underwhelming.  I’m not so much worried about this person “disrupting games” and I don’t like the idea that I should shrug off a death threat because they might have been “having a particularly bad day.”

And yet, I suspect that Riot probably receives so many tickets featuring racial slurs and death threats every day that a handcrafted individual response to each one would require the creation of an entirely new department within their customer service division.  Can you imagine?  “For questions about account security, email our Player Support Department!  And to report a potential act of domestic terrorism, email our Anti-Swatter Squad!”

I’m not sure what should be done about this problem.  I recognize that some degree of danger is associated with the radical anonymity that we enjoy online.

I guess I just want to share my story, both to thank my local police department for their willingness to hear me out and to commiserate with anyone out there who has been swatted or otherwise harassed online.  I don’t think that the people who attacked us were “having a particularly bad day.”  I think they do this to resolve grudges, to feel powerful, or maybe just for fun.  I have no solutions.  But I will listen to your story, if you care to share it.

What is Bob Ross Doing on Twitch?
Previous Post

From the Desk of the Editor in Chief