The following is the latest in a series of journal entries chronicling the author’s descent into next-gen gaming degeneracy—from getting his first television in years to trying to figure out why the @$@”$)@ you need two goddamn directional pads just to walk down a fucking hallway.

I’m making a note here: The Rookie of the Year is a huge success.

He—and by he I mean me—has beaten his very first Xbox game: Portal.

Now he’s faced with perhaps his biggest challenge to date: Finding a game even half as good.

I don’t mean to froth at the mouth, but while I’ve enjoyed all the games I’ve played so far, the Portals were the first ones I’ve truly loved. I’m now in grave danger of becoming a full-fledged Portal nerd—the rest of my modest games collection be damned.

Case in point: The other day on a hiking trip, I found myself imagining shooting portals across valleys and onto the tops of distant mountains, turning my quiet afternoon stroll into an epic journey across the wilderness. It seemed simple and harmless enough, but by the end of the afternoon I was mixing portals into my morning commute, planning jewel heists and working out the cost-benefit of flying to Prague, putting a portal on a wall inside the Staropramen brewery and leaving it there permanently.

I even wondered: Would I forget which color—orange or blue—that I used and erase all my work, half a world away, in an instant with a careless second shot back home on my apartment wall? Would there be, in this fantasy world of mine, a hazy blue force field across the Atlantic Ocean—or Ditmars Ave., for that matter—which would render my portals useless the moment I crossed over?

No matter. I still want a fucking portal gun, regardless of the pitfalls. Give me one, and I’ll consent to wear odd, stirrup-like supports on my heels, strain to check out cute chicks by shooting portals on opposite walls and peering through at their backsides and stand by helplessly as a mechanical version of one of my favorite comedians goes from my guide to my greatest enemy.

If my every adventure can end with adorable but lethal bullet-spewing robots singing in Italian and a strangely satisfying Jonathan Coulton track, sign me up right now.

I might even find a way to have a fulfilling relationship with a companion cube.

That’s how much I liked the Portals, and I see no shame in admitting it. The Portals teach you how to play them like a good book teaches you how to read it; in other words, they’re perfect for turning newbies into experts.

All the rest of my games pale in comparison and have been collecting dust ever since I first started doing science. Fable 2 now seems like a weak Zelda clone instead of a souped-up one. GTA IV is a mindless slog instead of a mindless joyride. Gears of War? I haven’t played that in weeks.

I know what you’re thinking: What happened to the old Rookie of the Year, the one who fumbled and bumbled his way through games with a childlike sense of wonder? He goes and beats a couple of games and all of a sudden he’s a jaded veteran, rabidly faithful to a few select titles but too good for others? All of a sudden he’s got everything figured out?

To prove that’s not quite the case, I’ll wrap up this week’s column with a story of Portal ineptitude of near-epic proportions.

I met up online with Unwinnable colleague Charles Moran for a very successful round of Portal 2 co-op. Very successful, except for about a 15-minute period when we simply couldn’t for the life of us figure out what the hell we were supposed to be doing.

We were stuck in a giant room, with no place to go and no clue how to get there. We tried shooting portals into every last corner and crevice. We rushed the door in unison. We committed suicide countless times, hoping it might reveal some secret.

Finally, Chuck broke down and found a walkthrough video on YouTube.

A walkthrough video which showed us we were stuck in a glitch, a virtual torture chamber we could never have escaped without resetting the game.

And yet this flaw didn’t deter me in the slightest. Only a game as smart as Portal could manage to stay a step ahead of you at every turn—with tricks and secrets discoverable with a bit of elbow grease—to the point where a glitch would seem like yet another genius bit of programming.

Wait, this was supposed to be a negative twist, right?

Did I just praise a game based on a glitch?

Am I about to claim the cake isn’t a lie and tell you not to waste your money on BioShock?

Excuse me, but I have a turret opera to download. 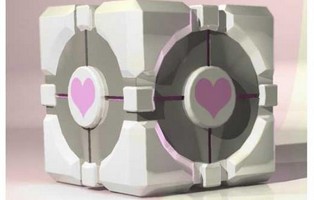 Matt Marrone stopped writing this column to play Portal about 10 minutes ago. You can follow The Rookie of the Year on Twitter @thebigm.

Rookie of the Year: Blood Brothers

It’s Spring, and Love is In the Air
Previous Post