There exists a strange phenomenon in open-world gaming: when faced with the freedom of choice and the immersive possibilities of an interactive environment (be it a swath of wilderness, a bustling metropolis, dystopian future society or post-apocalyptic wasteland) the perverse urge to locate the boundaries, barriers and edges of these worlds threatens to supplant the motivation to engage with the game as its developers intended.

These end zones take various forms: infinite oceans, unscalable mountain faces, invisible walls, obstructed highways, a band of health-depleting radioactivity or, most unimaginatively, a disapproving countdown accompanied by an order to “return to the mission area”. Game worlds are, of course, works of artifice; these complex objects are the aesthetic surface of an inner architecture which has a beginning and an end as much as any novel or film. Yet the outer edges of the game text, unlike any other narrative medium, tend to be disguised, offering an illusion of continuity with the game world proper or denying the existence of any real boundary.

The game text, then, is more of a medium.

All game worlds are in effect in media res, the player encouraged to believe they exist beyond their margins, before the game began and after it ends.

Barriers can be subtle, like the ocean in Grand Theft Auto: San Andreas (which simply loops back on itself the farther the player travels) or obtrusive, as the glowing animus is which cuts across Venice in Assassin’s Creed II (tantalizingly offering a glimpse of an inaccessible side of the city). These are merely pragmatic solutions to the problem of reconciling very finite interactive spaces with the illusion of a wider story world. So why do they compel the player to investigate them?

Why make Niko Bellic swim dispassionately towards a murky horizon, long after the glittering lights of Algonquin have faded from view? Or force Link to sail to the very edge of the Great Sea only to be turned back by his anthropomorphic vessel? Why track along the walls of the Grand Canyon in Fallout: New Vegas, as if looking for hidden foothold or path? Testing the limits of the game text is rarely rewarded with any objective achievement; no experience points, secret items or shortcuts are offered up as reward for the dull and time-consuming task of trekking, swimming or flying out to the end zone. 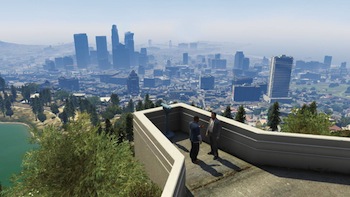 There the player is usually met with frustration and alienation; the futility of trying to break the game’s code is revealed along with the nature of the game world as a constructed and limited object, before one either reloads an earlier save or begins the long journey back. Games worlds are fallible. Their laws of physics can occasionally be broken with persistence or hacking, but crossing the boundary is likely to reveal a glitchy blank limbo, at best containing a few two-dimensional images placed like forgotten matte paintings on a film set.

There may be practical gameplay-based reasons for the lure of the absolute in the game text. The player might use the edge of the map to confirm they have exhaustively explored a particular area, as a means of orientation, or perhaps even as a defense, knowing that threats are unlikely to emerge from outside the game world. In sandbox games which stress freedom of choice, encourage creativity and reward exploration, finding the edge may be a skeptical impulse – a way of asking, “What’s the catch?” Or it may simply be part of a natural desire to understand the wider rules beneath which we have been granted freedom of choice. Perhaps pushing the boundaries of the game world is nothing more than childish petulance in reaction to even very generous limitations, the gaming equivalent of staying out past curfew just to see what happens.

One of the first projects I undertook in Minecraft was to build a spindly and crude stone watchtower, illuminated by medieval torches, up to the invisible ceiling of the world, far above the clouds. The motivation was partly to gain perspective on the patch of blocky and frozen tundra I had been dropped into, and partly to ask simply, “How high can I get?” (Or more accurately, “How high am I allowed to get?”) This was followed, upon acquiring sturdy enough tools, by an excavation down to bedrock, the game’s subterranean edge. Again, this exercise was motivated equally by gameplay and boundary testing, by gold rush fever – there’s always the suspicion that the mother lode of diamonds lies in wait a few blocks down – and by the question, “How deep?”

Minecraft’s vertical dimensions, though undeniably vast, are perceptibly finite; its horizontal dimensions are staggering, unimaginable, even cosmic. As the player walks towards the horizon, oceans, plains, deserts and canyons and the labyrinthine caves below are relentlessly generated by the game’s algorithms, with each mountain peak giving way to another expanse of unique territory. On all but the slowest computers the edge of the map recedes away from the player at the same rate it is pursued. 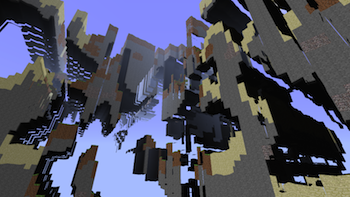 In its present iteration the game is – for all practical purposes at least – horizontally infinite. Minecraft creator Markus “Notch” Persson has stated on his blog that the maximum surface area is 4,096 million kilometers squared, or roughly eight times the surface area of earth. The substantial wiki page for the game suggests that even beyond this ludicrous terrestrial space yet more terrain is generated, though it is unstable and simpler due to limitations in the code. That every Minecraft world created carries the potential to be larger, in a narrow virtual sense, than the real world in which it is actually played is an impressive but ultimately meaningless fact which ironically makes one reflect upon the importance of boundaries in game design.

The seemingly infinite, unique and boundless worlds of Minecraft are undoubtedly integral to the game’s success (over 20 million copies sold on all platforms). It’s a field for unbridled exploration of hitherto-unseen lands, a blank canvas for all kinds of creativity, and a space for a personal self-motivated free-form adventure: an innovative and highly lucrative formula that’s based primarily around tearing down the spatial barriers which have long been a necessary convention of open-world games.

However, Minecraft is no exception to the strange allure of the end zone. The absence of boundaries in the game has seemingly only intensified their appeal. In an earlier version of the game, at around 12 million virtual meters from the center of the map – or, it is estimated, a 34-day walk in real time – one would approach an area nicknamed “The Far Lands,” where the breakdown of the game’s code would produce gigantic surrealistic distortions, the landscape fractured by glitches.

The Far Lands are like the event horizon of the game world, the space in which the landscape collapses into a visible code, as if the game, unable to maintain its pretense of infinite coherent space, spectacularly reveals its true nature as a program. As testimony to the attraction of this special end zone, online guides offer instructions for how to reach the Far Lands without spending a month of one’s life pressing forward on the keypad, while one YouTube channel with over a quarter of a million subscribers named “Far Lands or Bust” has raised over $80,000 for charity by staging an episodic journey to the Far Lands in the game’s West. At the time of this writing, it’s about five percent complete.

The Far Lands remind the player that what might have inspired wonder, excitement, loneliness or awe in the game world are simply manifestations of algorithm designed to generate varied yet believable terrain. The aesthetic power of Minecraft lies in moments where this code gives rise to unique situations, to coincidences and chance encounters, and to the illusion that a virtual world can appear unpredictable and complex enough as to have its own nature. Losing one’s bearings in the woods and never finding your camp again, lighting a torch underground reveals a waterfall in a vast cavern, a solitary tree perched on the lip of an overhanging cliff face, which makes the game briefly resemble Romantic landscape art.

That these profound responses are possible at all in a procedurally-generated block world is a considerable achievement, but they also unavoidably raise questions about the nature of Minecraft as a game text. If each player experiences a wholly different game world, can they even be said to be playing the same game? The fact that a random chunk of blocks resembling landscape can give rise to emotions like wonder and the sheer range and quantity of creativity that pours into the game’s online community suggest that the art of Minecraft consists of playing, responding and sharing. The game text, then, is more of a medium which only reaffirms the importance of artifice, intention, and expression in game worlds.

The fascination with end zones and boundaries in videogame culture is more than mere disobedience or testing of limitations; instead it gets to the core of something essential in a game’s art: the conflict between freedom and restraint. Some of the most sophisticated attempts to further interactive storytelling in recent years have toyed with the importance of such boundaries.

For example, an exhilarating sequence in Portal 2 has the player escape the “game” of Aperture Science’s testing laboratory into its inner machinations and architecture, as if looking into the game world from the outside. In Metal Gear Solid 4, Snake’s return to Shadow Moses – already a potently nostalgic site for character and player alike – is staged out of a blizzard and through a newly-exposed entrance to the now-decaying helicopter pad, where a decade earlier the player might have stood at the edge of the barrier wondering what lay beyond.

Of course, now players are exploring one of the most ambitious open world games ever created – many will leave Grand Theft Auto V‘s Los Santos and head out to sea, to the Far Lands where the art and possibilities of open-world gaming are rendered most succinctly, and perhaps even most movingly.