Ah, summer. A time to visit the beach, pack a picnic lunch and enjoy the ocean. And maybe watch a bit of television while you recover from sun poisoning. We may not be there to remind you to bring the sunblock, but we can help you choose your animated shows from Japan.

Much like in the U.S., the TV schedule in Japan is always a bit thin over the summer, as many viewers tune out and enjoy some outdoor activities. But there are a couple of gems this season, and you’d be wise to catch them in between games of inner tube water polo. Here are the recommendations, in descending order of predicted awesomeness.

If there’s a summer blockbuster to be had this year, this is it. First, there was Blood: The Last Vampire, and it was good. Then, there was the year-long Blood+, and it was EPIC. (And by the way, if you haven’t watched Blood+ yet, put it on your Netflix queue ASAP. You’ll be glad you did.) Now, original director Junichi Fujisaku teams up with xxxHOLiC director Tsutomu Mizushima and the talented ladies of CLAMP to bring us the next chapter of the saga, Blood-C.

There hasn’t been much leaked about the plot, but I don’t think there will be any surprises. Protagonist Saya is one of the world’s remaining vampires (or, as the English translation of Blood+ referred to them, “Chiropterans”). She seeks to rid the world of the evils of her brethren and needs to slay them by sword in order to do it.

This series looks like it’s only going to have a 12-episode run, compared to the marathon 50-episode story of Blood+, so things may feel a bit rushed. But I expect a lot of action and coolness here.

The creative risk-taking of Noitamina strikes again, with a futuristic sci-fi drama that feels at once both familiar and refreshing. The literary device is as old as the concept of stratified society, and yet the art and the backgrounds provide an imaginative and brightly-colored look into the future. There’s a lot here for fans of mainstream science fiction to hook into.

As to the premise: Shion, a scion of the ruling class, enjoys a sheltered life in the utopian model city called “No. 6.” On his 12th birthday, he crosses paths with a street urchin who calls himself Nezumi (which translates to “rat”), and his life is changed forever. Yes, there’s a fair amount of well-worn cliché in this story. But that isn’t necessarily a bad thing. Sometimes an old literary formula can yield a great fantasy tale. Personally, I’m optimistic. 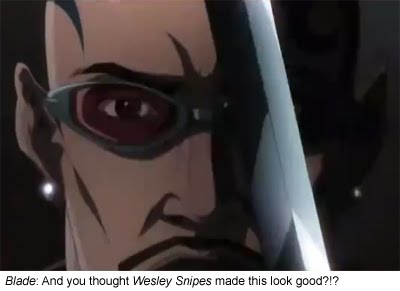 When I first heard about this ambitious 4-season Marvel/Madhouse project, I felt sure that they’d end it with a Spider-Man series. After all, Spidey is still the most recognized property Marvel has, especially outside of the U.S. But they threw us a curve ball, and the final installment of the project will be Blade. What can I say? Vampires are popular these days. The series has been getting progressively better, so let’s hope this sends the East-West experiment off with a bang.

If you’re not fan of the comic and you haven’t seen the American movie adaptations, here’s the plot in one line: A badass half-vampire is out to destroy all the world’s full-blooded vampires to avenge his mother. It’s simple, straight-up action.

Nothing succeeds like success. So if something a little new comes along and makes a splash, you can bet that it’ll provide fuel for a new trope or two. And those ideas will see a bunch of variations in an effort to recapture what made the originator a hit. With Gosick coming to a close, several of this season’s shows are trying to cash in on its cache. In the case of this adaptation of Gakuto Mikumo’s Bibliotheca Mystica de Dantalian getting the green light, the producers are hoping that “genius-girl-in-a-library” is something that can be easily replicated into a popular vehicle.

The story goes like this: During the 1920s, protagonist Huey inherits an old mansion from his grandfather. Upon taking possession of the house, he discovers a girl named Dalian in the mansion’s library who is the guardian of a collection of forbidden magical and demonic knowledge. Adventure ensues. I do think there’s some promise to this one, and I hope it lives up to that.

Continuing with the theme of smart girls, here’s a take on things that combines some old saws with a current wave in Japanese culture. Young Alice is a “Hikikomori”, or voluntary shut-in. With the help of her assistant Narumi, her detective’s intellect and her mad Internet skills, she solves mysteries in the comfort of her nightgown. I’m sort of picturing a moé version of Death Note‘s L. The quality of the writing is paramount for a project like this – the show will live or die depending on how interesting the cases are.

The other half of this season’s Noitamina block is a heartwarming comedy that, on first blush, looks more like an American sitcom than anything you’d expect to see from Japan. Daikichi, a bachelor salaryman, attends his grandfather’s funeral. There he finds that his grandfather had an illegitimate daughter named Rin, whom no one in the family is willing to take in. Daikichi decides that he will raise Rin, since it’s cruel to toss a young child out to the street. The problem is he is in no way prepared for parenthood. So, who’s going to grow up first?

Hajime Yamamura’s action manga gets the small screen treatment. In this tale, a family living in rural Japan carries on the mystic tradition of protecting themselves by commanding automatons that are animated by ancient spirits. Eldest son Kyouhei wants to escape this whole scene by going to college, but the magical forces from his past follow him to the big city.

The original is a very good story. But to be honest, when I watched the previews, it sort of looked like animation studio Brains Base might have mailed this one in a little. I really hope that the full episodes do this one justice. It’s the kind of plot that I think might resonate well with Unwinnable’s readers.

Also riding the coattails of Gosick is this story of a young Japanese girl trying to make her way in 19th century France, shortly after Japan reopens itself to trade with the West. At this time, Japanese things are quite fashionable to the French, and this attitude strongly affects everyone’s interactions with the main character, Yune. The focus here seems to be more on the clash of cultures than anything else. If you need something a little highbrow in between the high-adrenaline action shows, this may be your ticket. 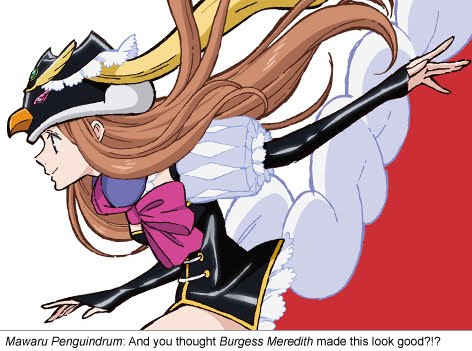 The talented but mercurial Kunihiko Ikuhara brought us the wonderful and critically acclaimed surrealist fairy tale Revolutionary Girl Utena in 1997, and he has largely laid low since then. We’ve waited a long time for him to try to top that project, and this is where that road has finally led.

The problem is that the project has been held in near secrecy until its unveiling a few months ago, and they’ve given us almost no indication of what the plot is actually going to be. The six preview commercials have been intentionally vague and obtuse, and they even waited until the last minute to announce the premiere dates. I get that they’re trying to generate some unconventional buzz. This leaves me in a pickle, though. I’d put this in Tier 1 without a second thought if only I had some substantial way to even describe it to you. There’s been a lot of speculation on the anime boards, but it’s all just that – speculation.

Here’s what I can tell you. There are three main characters: brothers Kanba and Shouha and their sister Himari. And there are penguins. The series will have 24 episodes. As for the rest, it’s “Watch and find out.” I’ll guarantee you this: any show from the mind of Ikuhara is going to be bombastic, push limits and subvert tropes left and right. It may even shock you.

Akira or, “The Powers That Be”

Rookie of the Year: This Was A Triumph