I just had minor surgery and was trapped on my couch for several days, unable to move very much and staring at my unopened copy of Assassin’s Creed III.

So I finally unwrapped it.

My early verdict: I have absolutely no idea what the hell is going on in this game.

A few questions for the experts at Unwinnable:

Am I in the present, the future or the past … or all three? Why am I, at first, some douchey straight-edge emo scientist and then some cold-blooded, 18th-century British nobleman? Aren’t I supposed to be a Native American? Why does Ben Franklin want me, a total stranger who just happened to be passing by on the street – literally straight off the boat – to find missing pages of his Almanac? Why are the pages missing and how the fuck am I supposed to know where to find them? Why did I spend five minutes listening to him awkwardly explain why it’s better to bed older women than younger ones? And why do I suddenly have to deliver mail? Does anyone notice I’m climbing the sides of houses and buildings and randomly slaughtering Redcoats in broad daylight? 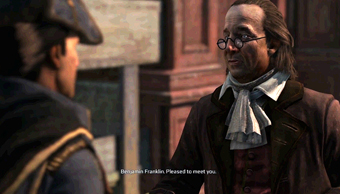 I’m not a total idiot. I have come to understand that I’m battling the Knights Templar and that my “real” self is somehow traveling through time and space, using something called an Animus to inhabit the bodies of my ancestors and uncover magical antiquities/help them solve their problems.

In other words, I am playing the home version of Quantum Leap.

Which is cool, I guess. But my plan to hop into Assassin’s Creed III as a total newbie to the series isn’t going as smoothly as I had thought.

• Take the opening sequence. I didn’t time it, but let’s say it was a two-minute cutscene in which the game presumably gets you up to speed with what has transpired so far in the series.

At around the 1:15 mark, I recognized one of the words in the voiceover as English.

I consider that a triumph.

• The controls are simple enough to understand, and I do love climbing shit. I didn’t quite as much love having to read gaming forums to figure out how to shoot my gun – the game presents you with an early bug, where some option I still don’t really understand is ticked off in the settings menu, and you cannot advance in the game.

• The gameplay early on is pretty dumb. The ship scenes are practically useless, although they do pay off at the end, when you climb to the crow’s nest, see the port of Boston in the distance and “Assassin’s Creed III” pops onto the screen in a cinematic title card moment that really does get the blood flowing.

It’s also a great way of saying, “The game really isn’t this boring. In fact, it hasn’t even started yet! We’ve only been fucking with you up until now.”

• What do I actually like about the game, so far? One candidate is the historical bios of the characters you come across. Here’s what it says about Franklin:

He was also quite the lady killer – Jesus. This guy – carrying on several ‘friendships’ with women while he was in Europe. The records don’t say exactly what they saw in him – certainly not his looks. Maybe women like a man who’s intelligent.

(If that was true I wouldn’t be here. I’d be in Portugal surrounded by them, and you’d be looking at a blank screen.)

Somewhere, in an alternate dimension, Unwinnable.com is an American history web site, and their Rookie of the Year wrote that exact sentence.

• Let’s get back to the climbing thing. How is it that no one sees me? One of the game’s very first scenes involves climbing up the walls of a packed theater, dangling over the crowd as you hang from the box seats during a live performance, before crashing around backstage and onto the catwalks. 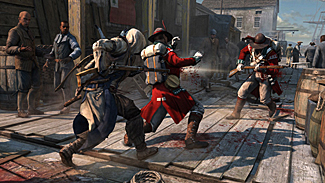 Someone has got to notice that shit.

Sure, I’m stealthy. But next time you’re at a Broadway show, try hopping from the balcony to the boxes, breaking into a restricted area and swinging above the stage on a prop moon – and see if anyone notices.

Oh, stop being so nitpicky, you say. I’d totally buy it if it were an action movie, you insist.

But when I reach Boston, I can leap from rooftop to rooftop like Spider-Man, and no one seems to bat an eye when I swoop down and murder someone on a crowded avenue; as long as I kill all the Redcoats in my immediate vicinity, I can walk away scot-free and even loot their bodies in the middle of the street, suffering only a few vague insults from passersby.

If I spare a Redcoat, I get a chase straight outta Grand Theft Auto IV, where at least the police make a show of chasing you for a bit until you get out of range.

And then? Once you’re in the clear, you’re back to being everyone’s favorite stranger, and the Founding Fathers kindly resume asking you for favors.

Oh, and advising you to chase MILFs.

Matt Marrone hopes that when he meets George Washington, he doesn’t suggest a three-way with Martha. You can follow him on Twitter @thebigm.

The iPocalypse is Nigh