Unwinnable continues its conversation with Richard Flanagan, the indie designer behind FRACT, winner of Best Student Game at the Independent Game Festival during GDC 2011. In the first part, Flanagan told us about his decision to quit his job to pursue a career in videogames and the difficulties that came with it. Now, he talks about the game itself and how he has gone about creating it.

Unwinnable: Can you describe FRACT for me in your own words?

Richard Flanagan: FRACT is a first person exploratory adventure game, somewhat like the Myst series, but much more abstract. There is little direction or explanation – it mainly leaves it up to the player to explore this forgotten, abstract world of sounds and structures.

Unwinnable: Tell me about the genesis of FRACT. Where did the basic notion come from and what was the original intent for the project?

R.F.: The idea for FRACT has been brewing for quite a while and across a number of mediums, including installation, web and games. The concept for FRACT really is a passion project, as it combines a lot of things I love: electronic music, lo-fi aesthetics, graphic design, early VR and some analog culture. Plus I’ve always been a fan of the stark, lonely landscape of post-apocalyptic worlds.

I can’t really pinpoint exactly where and when the idea for the game came about, but when I got the chance to work on it as an independent project, I jumped on the opportunity to develop a prototype. After finishing the program in the fall (and finding myself with some spare time due to my unemployment), I continued working on FRACT, precisely because it’s so near and dear to my heart. It was more for personal satisfaction rather than anything else. That’s part of the reason that the positive response has been overwhelming – because ultimately, I built this world for me – so it’s hard to believe others want to play in it too!

Unwinnable: I can see the influence of TRON, Myst and a kind of cold surrealism akin to the earliest arcade games at play within the environment of FRACT, but the game very much maintains its own aesthetic. How conscious were you of your influences when starting out with FRACT and how did you go about taking them and making something that was entirely your own?

R.F.: Though I was conscious of different influences, I wouldn’t say that they were so much of a direct inspiration for the game as they are just general influences on my work as a whole. I’ve always been drawn to a minimalist, technical aesthetic and it is a visual style that seems to permeate through most of my work – in games, graphic design, etc. In terms of making something my own, I think that while one can be influenced and inspired by many things, what you make is still inevitably filtered through who you are – your perspectives and your experiences. And that will always be unique, from person to person.

Interestingly, the look of FRACT is also a combination of my personal aesthetic as well as some pragmatic design decisions. I had a rough framework for how I wanted to approach things like scale and hierarchy of color, but implementing them was largely experimental and guided by restraints like learning curves and lack of technical know-how.

It’s funny how being constrained can force your creativity to explore different solutions! And wherever possible, I tried to design a world that felt totally unfamiliar but still decipherable. 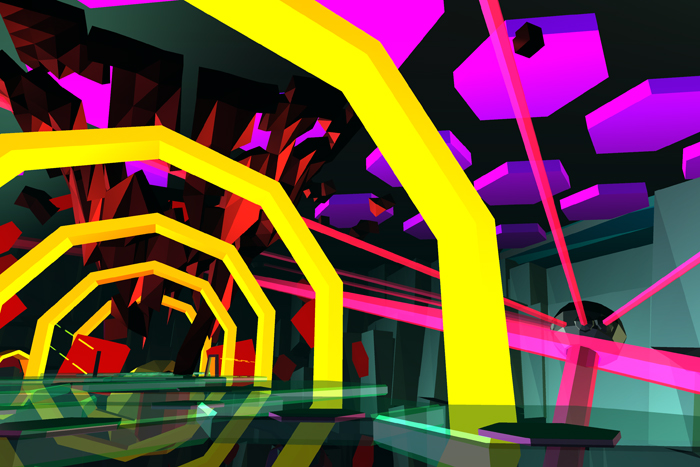 Unwinnable: On the purely technical side of things, what did you use to create FRACT? Did any of your tools create challenges that had to be overcome? Or did the inverse happen and did you find your tools providing inspiration for new elements of the game?

R.F.: The FRACT beta was cobbled together with a variety of tools, the most prominent of which was the Unity game engine. Other software included Cinema 4D for modeling and animation, along with Ableton Live and Adobe Audition for music and sound design. My old sample libraries from the days when I used to write electronic music and my dusty analog synth also contributed to the sounds of FRACT.

Unity did provide a very friendly workflow, along with an active and collaborative developer community, which helped immensely in achieving certain ideas. Unfortunately though, my lack of programming skills and inexperience in producing assets for a game like this held me back considerably. As a result, I certainly encountered technical challenges – in some cases I managed to find elegant solutions, but often I had to scale back my ideas until they just worked. Moving forward I intend to get help in order to develop the puzzles and interactions I had originally hoped for.

Being able to delve back into the world of electronic music and sound design was incredibly inspirational – it reminded me of just how much I missed it and how intrinsically satisfying it can be to make music. That continues to be a driving force in the game’s design, which I’m really looking forward to expanding upon in the full release.

Unwinnable: About how many hours have you put in to FRACT? Does the current beta version reflect the full scope of your intentions?

R.F.: The current beta was made over a period of six months, but probably adds up to about two or three months of full-time work. It was a busy year, and my wife and I spent at least two months planning, designing and having our wedding somewhere in the middle of development. It’s tough to estimate the number of hours I spent on the game – though I probably put in 200-300 hours in front of my computer. But I was always designing things in my head and letting ideas percolate in the background, so it’s tough to put a number on that.

The FRACT beta is really just a sliver of a bigger idea I’ve been developing for a few years now. While I am very proud of where I managed to take it in the current version, it really acts as more of a proof of concept than a full blown beta. Given more time and resources, I would expand the world to reflect more of its influences while simultaneously creating a tighter context between the puzzles and the subject matter. While I feel as though most of the puzzles in the beta are too disparate from their respective musical inspirations, I’m hoping to get closer to the original idea soon. With the goodwill and momentum coming off of the GDC 2011, my wife and I are hoping to take a real stab at finishing a full release as close to my original vision as possible (with programming help!). 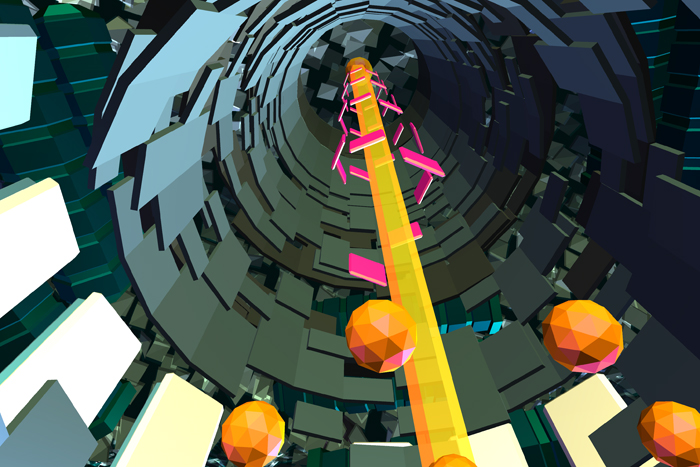 Unwinnable: For its lack of explicit narrative, FRACT does seem to have an unspoken feeling that there is more going on than the player is really aware of. Do you have a FRACT bible at home, filled with painstaking notes or is the cipher of what FRACT really is a purposeful omission? As a developer, how did you go about instilling meaning into what is essentially a number of puzzles within an abstract space?

R.F.: I’m really glad to hear that you had that type of experience when you played the beta, as it is definitely a big aspect of what I was hoping to achieve. Without going into too much detail, I will say that there is a plan and ideal architecture for this weird little world. The real test will be to see if I can manage to communicate it the way I hope to. As a designer/developer, you do your best to create the context in which the player interacts, but in an abstract world such as FRACT, there is still a lot left up to interpretation. Having said that, while there is no FRACT bible per se, there definitely is a master plan and it will hopefully become much clearer in the full release of the game.

What the FRACT? Part 3

C2E2: This Is The Con You’re Looking For

Coffee Break from Beyond!