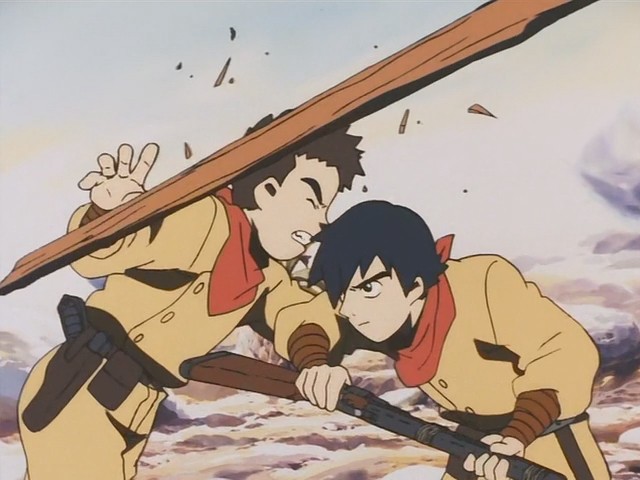 It’s generally rare for an animated series to surprisingly evolve in emotional and psychological complexity deep into a short run. Even the best series will reveal its relative intensity early enough to keep its audience enticed and informed. Written by Hideyuki Kurata and directed by Akitaro Daichi, Now and Then, Here and There (1999) is just such a rare exception. What seems to be a coming-of-age tale about a boy transported to an altogether different time and place slowly and subtly becomes something much darker and more profound in just thirteen episodes.

The show’s main character, Shu, is of the hardheaded variety and this very sense is what sustains him through much of his ordeal. His determination to protect Lala-Ru, a girl he sees for the first time atop an abandoned industrial site’s smoke stack subjects him to beatings, torture, incarceration and a bevy of joyless tribulations. 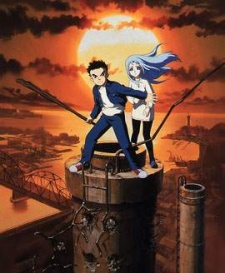 But his being at the center of the action seems ultimately more catalytic. Through him, for example, we meet the mad king Hamdo, a paranoid megalomaniac cat killer who rules over a mobile fortress in a merciless search for the world’s dwindling water supply. In addition to the king, Shu’s experience exposes us to a vicious army of child soldiers, a young, impregnated rape victim, and countless other characters and situations the innocence or corruption of which are as multifaceted as they are fascinating.

The horrors he’s exposed to in what I can only surmise is a kind of dystopian future, or perhaps a parallel dimension, never really alter his behavior or his mindset, which would be a drawback for any other show’s main character. But instead, despite a terribly complicated emotional landscape, Now and Then, Here and There maintains an air of simplicity, likely attributable to the simplicity of its protagonist, through whose eyes we’re privy to what is likely the most underrated (if rated at all) animated series ever produced.

The series is currently streaming on Hulu, so go check it out. It will entertain you and provoke thought (and it’s free!). And if you haven’t already, check out Greatest Unknown Anime – Part 1: Elfen Lied

Akitaro Daichi, Anime, Lala-Ru, Now And Then Here And There, Shu