“All the new thinking is about loss.
In this it resembles all the old thinking.”

Since Makoto Shinkai’s arrival on the anime scene, he’s created some of the most breathtakingly beautiful – and heartbreakingly depressing – feature films in the industry. He’s one of the few directors out there to regularly be compared to the great Hayao Miyazaki, and with each release the comparison becomes more favorable. Every single one of his films, however, has dealt with the very same theme: loss of love and disconnection over time and space. Even before he released 5 Centimeters Per Second (2007), some of his critics (particularly those named Daniel Imperiale) had begun to wonder whether the young anime auteur had anything else to say.

The talk was that his latest feature, Children Who Chase Lost Voices From Deep Below, would be a long-awaited departure from this theme; specifically, it would be an epic adventure. The bad news is that Mr. Shinkai is still dealing directly with the same theme he’s always enjoyed. The good news is that he does so in a way that makes you see just how much he’s matured. 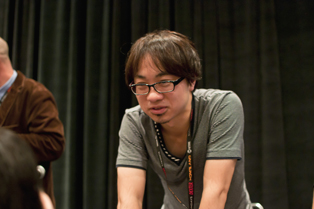 Voices of a Distant Star (2003) and The Place Promised In Our Early Days (2004) were tales of loss and separation told with the eye of the modern short fiction writer or poet (see epigraph). 5 Centimeters went even further in this direction, breaking the frame of the story into three distinct, and yet unsettled, parts. Characters move through their lives with faint memories of hopes and promises that time and change prevent from coming to pass. The loss is always gradual, the pain of the divide increasing as years wear on. It’s like watching a Japanese Raymond Carver adaptation starring children and adolescents.

To premiere his latest film to viewers on the East Coast, Mr. Shinkai attended the 2011 New York Comic Con, where he introduced the film, fielded questions from fans and even opened up a panel discussion hosted by the renowned Japanese-American scholar Roland Kelts. In one particularly humorous moment (made more so by the delay in understanding as the question filtered through Mr. Shinkai’s translator) an audience member asked if, given his themes, Mr. Shinkai thought love was doomed.

“I don’t think love is doomed,” he answered through his translator, “but love doesn’t always work out, particularly first loves.”

He went on in the discussion to speak of the year he spent in London between 5 Centimeters and his newest feature. This was the first real amount of time Mr. Shinkai had ever spent outside Japan, and the global influences he encountered overseas are all over Children Who Chase Lost Voices. Asked about his research methods, Mr. Shinkai says he just spent a lot of time in London’s museums, soaking in world histories from a new perspective. When it came time to apply this new perspective to the old themes of loss and separation, two major changes occurred.

The first is that the sense of loss, which had always been so tortuous for Mr. Shinkai, now has immediacy. The protagonist Asuna’s father is dead before the tale begins, and the boy she meets in the mountains, who saves her from an other-worldly beast, dies shortly thereafter. The story becomes one of reconnecting and eventually of letting go, something none of Mr. Shinkai’s previous characters have done successfully.

The second change is that the style, which had always been so uniquely Japanese, found itself thematically and artistically in sync with themes and styles from around the world. Asuna’s search for her lost friend, for her father and her teacher’s search for his lost wife are meant as plays on the Japanese myth of Izanagi and Izanami, the gods who created Japan and the world. Izanagi travels to the underworld to retrieve his lost wife, but is not allowed to look upon her until their return to the surface. Of course, he looks at her, and all is lost as he sees she is a rotting corpse.

What might have been a dangerous opportunity for Mr. Shinkai to confine himself to Japanese myths and terms is salvaged by his exposure to other cultures. If that myth sounds familiar to you, that’s because some form of it exists in almost every global mythology on record. You may remember it in its Greek form between Orpheus and Eurydice. But Mr. Shinkai, in all his newfound wisdom, doesn’t just use Greek terms instead of Japanese. Rather, the mythology of Children Who Chase Lost Voices is essentially global. The terms for certain gods of the underworld come from Mayan and Aztec beliefs, and the term used for the underworld itself comes from hollow earth theorists in the mid-20th century. The bottom line is that Mr. Shinkai has discovered a universality to the themes he’s always examined under a microscope, and in applying this he’s created a true epic. 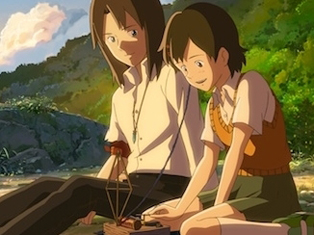 With a renewed understanding of his own style, Makoto Shinkai seems poised to wrench the role of Japan’s most prominent animator from the still-capable hands of Mr. Miyazaki. Even the character designs in Children Who Chase Lost Voices seem to announce that Mr. Shinkai believes he’s ready. What were once sharp-angled, almost shiny representations of human form have softened and taken on the edges and pallor of Sheeta and Pazu from Miyazaki’s Laputa, and the old tales of distance have evolved into coming-of-age stories that rival Spirited Away.

If it does come to pass that Mr. Shinkai finds himself at the helm of Japanese feature-length animation, that by no means implies that he’ll become Hayao Miyazaki. Even as he positions himself for such a role, Mr. Shinkai maintains the sensibility that got our attention in the first place. In the midst of a sprawling epic, he’ll still take the time to dote upon the simple, overlooked places: a mailbox stuffed with letters, a tattered chain-link fence in the snow, the way the sun lights up a train car, window by window, as it emerges from a tunnel.

A fan at the premiere asked for a clue as to what might come next, to which Mr. Shinkai replied, “It’s only an idea, but it’s something far out in space, where two people are separated.” I suppose if that epigraph up there is true, then why fight it?

5 Centimeters Per Second, Anime, Children Who Chase Lost Voices From Deep Below, Hayao Miyazaki, Makoto Shinkai, The Place Promised In Our Early Days

This Week’s Exciting Conclusion to the NYCC Photos!