Let us speak, for a moment, about desire.

In the Buddhist traditions (notably Zen/Chan Buddhism), desire is a condition of delusion. The world we perceive with our senses is a kind of sham initiated by ignorant craving. What many Buddhists correlate to enlightenment is emancipation from worldly desires and from the perception of dualities (black/white, good/evil, life/death).

Depending on which sect you’re dealing with, this victory over desire and the practitioner’s subsequent enlightenment are incremental: today I am craving a good anime, tomorrow I am aware that both the anime and the craving are illusions. That’s one notch in the Buddha belt—plenty more to come.

And so we turn to the epic as a form for film, for literature. An epic is nothing without a hero to whom the audience must, for better or for worse, become attached. Writers, directors and animators will employ all manner of devices to ensure that their audiences make that connection. And the creator of a Buddhist epic only has then one task ahead of him to point the way to enlightenment: tear your attachments asunder.

It’s an interesting risk to take, the removal by death or circumstance of a major character from an epic. In many cases, especially if we’re talking multiple film/book franchises, a move like that can seriously alienate your audience. For the people that stick around, but are nonetheless devastated by the move, they might find themselves thinking, “Oh, it’s just a film.” And that willful cognitive distancing from subject matter, or more pointedly, from subjectivity, is what renders readers and viewers ripe for enlightenment. 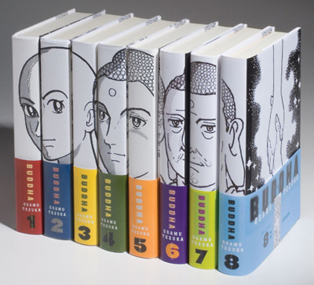 Apply this to Osamu Tezuka’s eight-volume epic, Buddha, and the lesson couldn’t be more obvious. The combination of desperation and levity, death and love and adventure are what make great epics unforgettable. The interweaving of a potent and applicable philosophy is what makes Buddha a classic. Now apply that same logic to the recent film adaptation of Tezuka’s first two Buddha novels, Buddha: The Great Departure, which premiered this month at NYAFF’s Japan Cuts, and you’re liable to see stark differences in means and ends.

First of all, for audiences unfamiliar with the manga, whom we can assume compose the trilogy’s primary demographic, director Kozo Morishita and character designer Hideaki Maniwa have a simple set of tasks: stay true to the original story and character designs and utilize all the added tools of the cinema to emphasize the statements of the author in a way that ingratiates new viewers to Tezuka’s themes and aesthetic. Unfortunately, the team fails to live up to these requirements within the film’s opening minutes. 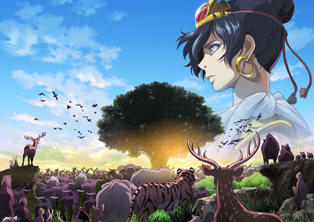 Here we encounter the classic Buddhist parable of an old monk lost in the snowy wilds, the local beasts of which come to his rescue. They each gather food for him, but for one rabbit that is unable to forage anything substantial. The rabbit urges the man to build a fire, only to throw itself into the flames once it is lit. It could be a moving moment about sacrifice and cyclicality, as it is in Tezuka’s pages. The film, however, in employing those added tools the cinema offers, opts instead to layer on the emotion, swelling its strings like the fucking Titanic was sinking while the voice actor playing the old man howls unconvincingly. All at once, we are put at arm’s length from the film, a distance we must certainly cross to find meaning anywhere else throughout. Perhaps the director wanted his film to remind us of the first of Buddhism’s Four Noble Truths, that to live is to suffer. Sure, it might have been tough to sell modern animation audiences on Tezuka’s original character designs, but in keeping just one or two intact, the animators lose steady footing in either modern or classical styles.

Fortunately, the power of Tezuka’s original telling defies all the musical and artistic attempts by the film’s staff to ruin it. Chapra, for example, the embodiment of a Buddhist revenge parable and a contender for the role of hero, is rendered lovable if somewhat misbegotten by the filmmakers, who manage to overlook the compassion he’s meant to develop for the target of his vengeance. Despite this muddying, we still find ourselves rooting for him as we do the young Siddhartha, whose flirtations with love and reality are incredibly well-timed within the film’s 111 minutes. One only wishes the joy of this love could have been more evocatively spun forth, more patient and intimate, which only would have increased the horror of its violent demise.

And violence in The Great Departure is abundant. Exactly what American age group a film like this might target is difficult to surmise. Most helicopter parents in our day and age would find themselves covering their children’s eyes or escorting them out of the theatre (and straight to their therapist’s) during the more gruesome wartime scenes. But the film’s tone is still somewhat removed from adulthood, without sex or foul language, and with only the most carefully concealed hints of nudity.

Still, The Great Departure, as an opening stanza to an expected trilogy, is undeniably compelling, however poorly executed, which I will reiterate is a credit wholly due its source material. In terms of the epic, all of the things the film achieves the manga already had. And in that epic, thanks in large part to Tezuka’s ability to draw his readers in with more than just angst, violence and sorrow, his mirth, his careful love and his tough, often deadly, decisions are the clearest vehicles for enlightenment in the modern Japanese, or any, artistic canon.