This feature is a reprint from Unwinnable Monthly #157. If you like what you see, grab the magazine for less than ten dollars, or subscribe and get all future magazines for half price. 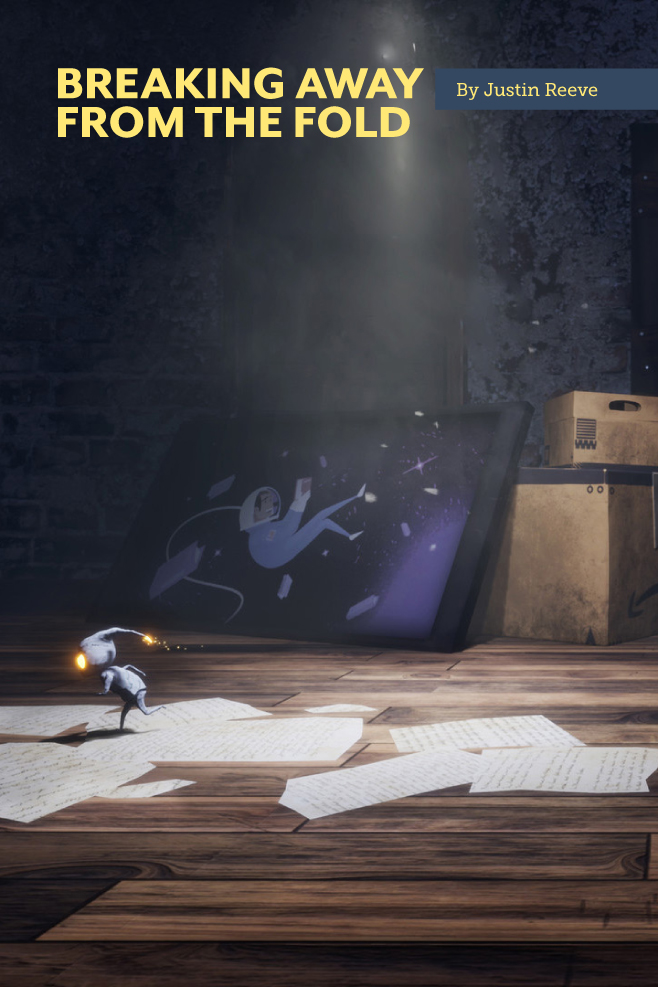 There was a time when indie games could get at least a little bit of attention, but over the course of the past eight or nine years, the market for them has become steadily saturated. I’m sure that we’re all pretty familiar with the term “indiepocalypse.” The result has been a constant struggle to stand out from the crowd, with some reaching astounding heights but others failing to make their mark on the world. With its calming atmosphere and innovative mechanics, A Tale of Paper: Refolded seems poised for success even despite the many challenges involved, thanks in no small part to some perfectly timed support from an Epic MegaGrant.

A Tale of Paper: Refolded is a puzzle platformer with a unique shapeshifting mechanic allowing you to assume a variety of forms. The game tells the story of Line, a magical character made of paper who can use origami to change its shape. “Transform into a frog, a rocket, a bird and more as Line embarks upon an emotional journey to fulfill the dream of its creator,” the official description explains. The story poses a number of interesting questions including the extent to which our most deeply held hopes and ambitions can impact the people around us. In other words, “Can a dream transcend its owner?”

The way Concept Artist and 3D Animator Raúl Roldán describes the game, A Tale of Paper: Refolded is a charming adventure that “allows you to just lay back and enjoy a very calming experience for a few hours, playing as an endearing and cute character that can shapeshift using origami.” The studio behind the project, Open House Gam es, based in Barcelona, Spain, refers to A Tale of Paper: Refolded as more of an experience than anything else, a feeling of presence or even just being there, something which tries to go beyond the bounds of its own medium. “We see it as taking part in a longer movie where you lay back and forget everything for a few hours. It’s just the player and the game and we want people to immerse themselves within the atmosphere,” Roldán explains. When it comes to what players can expect to take away from the experience, Roldán hopes that players will get to feel the “story that we wanted to tell without text or words and also leave them wondering with their own theories.” The artist adds that “I want them to end the game and leave with a good memory about it, so that when it comes to mind, they remember having a good time with it.” 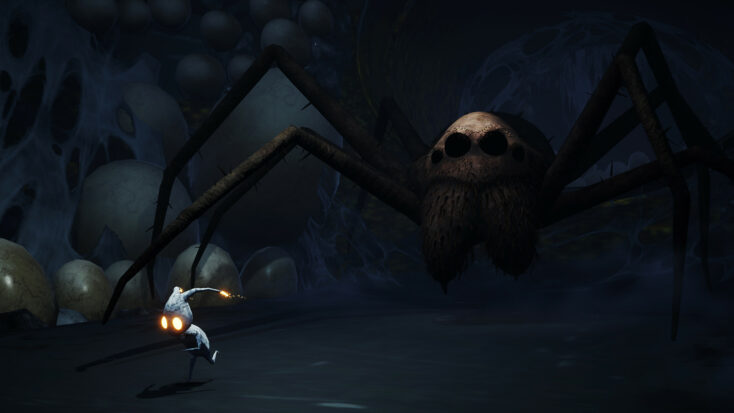 When it comes to making A Tale of Paper: Refolded stand out from other puzzle platformers, Roldán remarked that “for us, the way you get to use the platforming abilities with the origami is very unique. For example, instead of adding a double jump, the player has to transform into a frog. This way you are constantly switching between shapes at your liking to traverse each scenario how you prefer or thinking which is better for each situation.” A Tale of Paper: Refolded also features three prequel chapters, each of which adds a couple of new mechanics. These are primarily focused on affording players the ability to better express themselves through a series of clever gameplay twists. According to Roldán, players are “given a more dynamic ability to traverse the different scenarios and have to avoid new dangers and obstacles in a different way.” Players, for example, can use a new ability in these prequel chapters called Stomp, which lets them engage with hostile Roombas in a manner which allows for all sorts of creativity. “Stomp is the most interesting for us, as it adds a twist to the Roomba encounters because now the players will be able to attack the Roombas and stun them for a few seconds instead of just having to outrun them,” the developer notes.

This particular approach to game design can be traced back to the shared experiences of the team over at Open House; almost everyone working on the project has studied at the same university. “We are a small team and A Tale of Paper: Refolded is our first game,” Roldán says. “Our experience comes from the game development university that we all studied at and by having played multiple indie games and consumed various media that we use as inspiration.” In terms of design philosophy, the team is all about innovation, aiming to transport players to new places or worlds apart. “When it comes to making games, we want to create experiences that have elements or that are in their totality original and different,” the artist explains. “We mainly focus on single player experiences that tell unique stories that can reach a variety of players.” 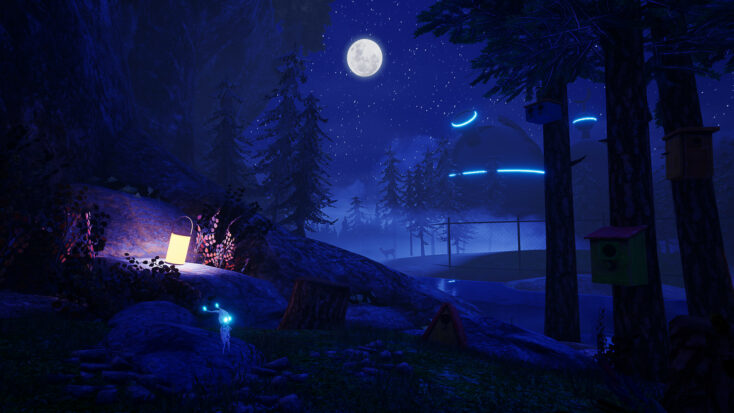 According to Roldán, A Tale of Paper: Refolded was inspired by a number of other successful puzzle platformers, Little Nightmares in particular. This puts players into the shoes of a tiny person exploring a huge house, perhaps better described as a dusty old mansion. In any case, the setting is truly fit for a horror show. “The first idea was born when we took as inspiration Little Nightmares,” Roldán recalls. “When it came out, we loved the concept of exploring a world where everything was oversized in relation to the main character.” The team had no intention of making a horror game, so the decision was made to adopt a much lighter and more whimsical tone. “As we did not want to make a horror game, we took it in another direction with the origami theme in mind, inspired by the movie Kubo and the Two Strings,” Roldán explains. The aim was to use the “paper factor to make our main character face common dangers that are not especially scary,” the developer says. “Roombas, for example.” The next step was to make this vision for the game a reality, a major turning point coming just after production got into full swing. “A very important date for us was in 2018 when we released the free demo of A Tale of Paper: Refolded onto Itch.io,” Roldán remembers. “The feedback and impressions we received were so positive that it really made us take the decision on making it a full game.” This would be where the Epic MegaGrants program entered the picture. 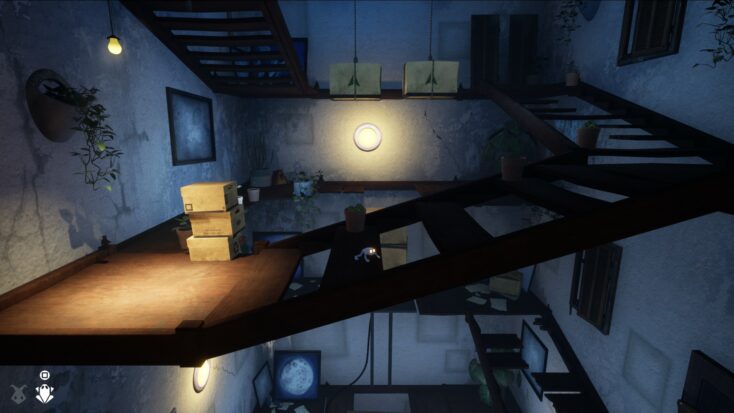 Epic MegaGrants provided the necessary financial backing to go from a demo to a full release, prequel chapters included. “It gave us the financial push that we needed to develop the expansion before having a publisher for it,” Roldán pointed out. The program also allowed the team to hire a composer for the project, something which turned out to be absolutely critical on account of the fact that A Tale of Paper: Refolded relies quite a bit on music to communicate emotion, at least in its current state. “We were also able to hire musicians, something that was a necessary aspect of the game, because it does not have dialogue or text. Our only way to express the emotions we wanted the player to feel was through the gameplay and sound. Right now, we can say that the original soundtrack is something we are very proud of,” the artist explains. Unreal Engine also played an important part in things. “The biggest noticeable thing was how Unreal Engine gives you the tools to make the game look beautiful in a very easy way,” Roldán says. “Other engines might be a bit tricky to tweak until you get that professional look which you can give an indie game. Unreal Engine helped us achieve the atmosphere we wanted for the game with almost no headaches and we were very pleased with it.”

A Tale of Paper: Refolded was released earlier this year on August 19, 2022. The reviews have so far been positive, particularly those coming from the community. The game currently has a few dozen user reviews on the digital distribution platforms GOG and Steam, almost all of which are filled with praise, a point which hasn’t escaped the attention of Open House. “We listen very closely to what the players say about the game and we use the feedback that the community gives us to fix any issues the game might have in order to put out a much better experience for everyone,” Roldán explains. “As for critics overall, we are very pleased with how the game was received.”

What Creates Class In The Internet Age?