This feature is a reprint from Unwinnable Monthly #153. If you like what you see, grab the magazine for less than ten dollars, or subscribe and get all future magazines for half price. 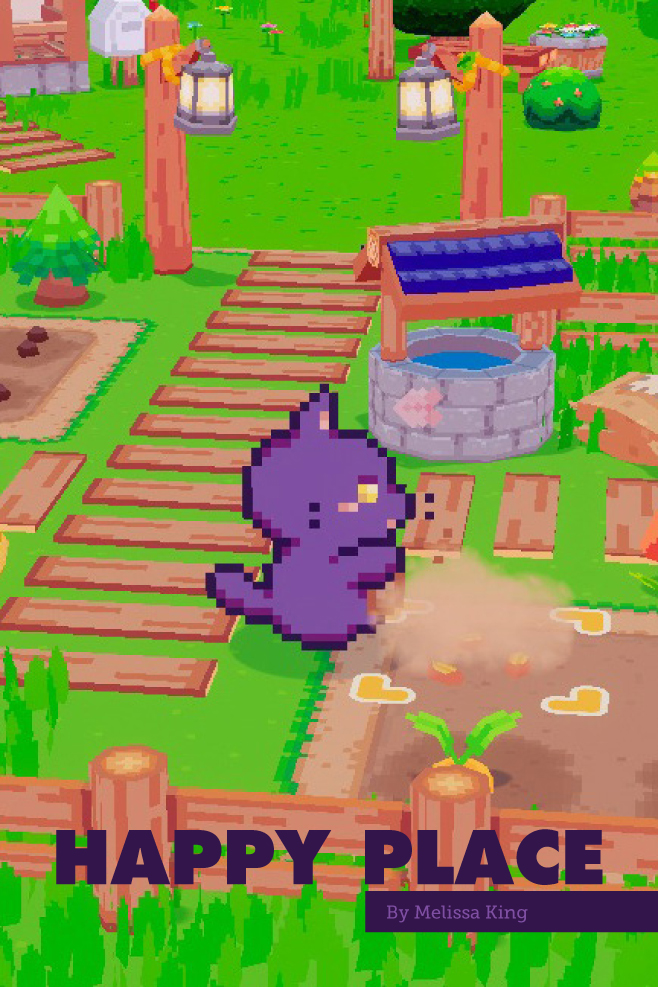 With times getting extra tough these past few years, everyone needs somewhere to mentally retreat. Maybe you like to imagine running an idyllic cat sanctuary now and then (couldn’t be me). Or, like many Unwinnable readers, you get away from it all with a relaxing videogame.

The co-founders of Bluecurse Studios, wife and husband Erisa Liu and Jordan Gonzalez, want to give you another cozy digital getaway – their upcoming game, Snacko. I corresponded with Liu over email to see what it’s all about.

“Snacko is a farming cat-venture with a lot of slice-of-life energy,” Liu says. “The adventure part comes from settling in a completely new land with a hidden past! But outside of discovering the hidden mysteries that Snacko Island has to offer, there are also friends and cozy moments of slowly building up a community around you to help you relax.”

For the record, Liu calls it a “cat-venture” because it stars two pixelated cats, Momo and Mikan, who want to start a new life on a deserted island. As their adventure goes on, they start a farm, rebuild the local community and uncover the secret of the island’s curse. Snacko has all the key elements you’ll see in farming games like Story of Seasons and Stardew Valley, such as growing crops, raising animals, befriending villagers and attending festivals. But, it puts its own spin on the genre with 2.5D visuals, puzzle dungeons and a sugary-sweet aesthetic.

Since Liu and Gonzalez conceptualized Snacko when Liu was in game design school, the game is Liu’s biggest project so far. Before, Liu and Gonalez mainly created games for game jams and school projects.

Liu says, “Snacko actually started off as a small project to showcase my art as I was going into my junior year of college. It was supposed to be a top-down Zelda type of game. The main guiding point at the start was the visual style, and our main art direction inspiration came from Octopath Traveler.” The first teaser trailer for Octopath Traveler came out around that time, and it inspired Liu and Gonzalez to try their hand at 2.5D visuals themselves in the same engine – Unreal Engine.

The project wasn’t intended to become a full game. Instead, Liu created screenshots and GIFs that she shared on Twitter. “After the positive feedback we received from Twitter and then Discord and Patreon, we decided to expand our ambitions with the game. In that sense, I feel like our connection with our community has shaped Snacko into what it is today,” Liu says.

Snacko also didn’t start off with the focus on nature it has today. When I asked her about the current version of the game’s real-life influences, Liu told me, “The original Snacko probably had more real-world inspirations. Before it was even a real playable game, Snacko had Japanese city vibes. Convenience stores, ad banners, apartment buildings, small streets . . .” 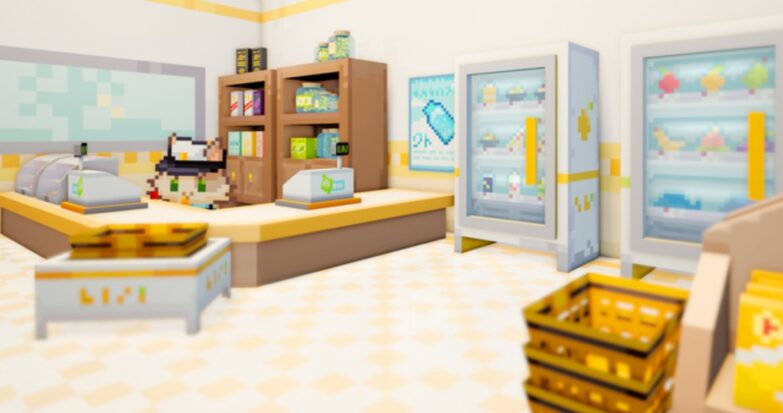 But once Liu and Gonzalez began to think of Snacko as a complete game instead of a small project, they had to think of more concepts to figure out the right direction for it. “Out of all the ideas we came up with, ‘rebuilding an abandoned island’ was the most appealing to us, so I started lookdev and world building from there,” Liu says.

Liu credits her love for life and farming simulators for Snacko’s transformation from a pure adventure game to a farming game. While you might think Story of Seasons or Stardew Valley was the game that most inspired Snacko’s final build, Liu names The Sims as her top inspiration. It was the feeling of working hard in The Sims to achieve her goals that led her to developing a farming sim. Liu says, “There’s just something relaxing about making your dream space after struggling. It’s really just not as fun when you use cheats. So I think the farming sim genre really dug into that feeling for me.”

But, as one of the pillars of the genre, Story of Seasons (previously known as Harvest Moon in the West), naturally had some influence on Snacko’s mechanics. 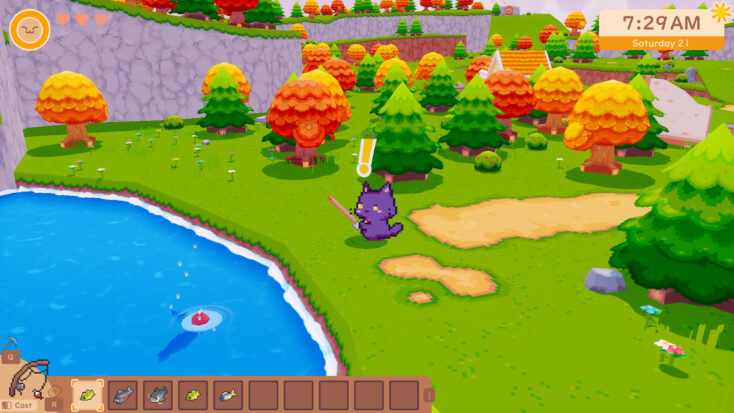 Liu says, “I started my Harvest Moon journey with Harvest Moon DS Cute. But I want to say it only really became a core series and genre for me from Harvest Moon 3D: A New Beginning. The game starts off with an almost empty town, and as you work to improve your farm, more people move to the town. You’re able to place their houses freely within confined spots and decorate your farm with a simple system. I want to say that sort of idea and formula now is pretty standard, but at the time, it was amazing to me.”

You can see A New Beginning’s influence in Snacko’s town-building mechanic. Like its Harvest Moon predecessor, Snacko allows you to rebuild a community’s buildings and bring in more people.

The inspiration for Snacko’s stars – two cats starting a new life and their farming mentors – comes from a personal place. Liu and Gonzalez based the game’s first few characters on their real-life pets. When they first started Snacko, they only had Momo and Mikan, so they created main characters with the same names and appearances. Later on, they got their real-world cat Nobu, whose appearance inspired the Snacko character Nobu Jr. Their other real-life cat, Maru, has yet to make an appearance, but his debut will be in the works after Liu and Gonzalez finish Snacko’s main story.

“Since the core team of Snacko is just the two of us, we needed some closer-to-home inspirations for our characters and story to start us off. Neither of us are writers, so I feel like basing the initial characters off of pets that we’re familiar with and have stories about made the process easier,” Liu says. “Once the main crew was in, it was a lot easier to expand on that universe within the game and create original characters to fill it out.” 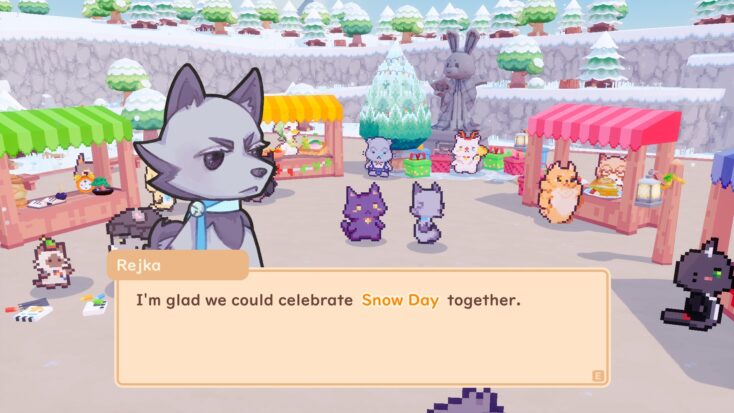 While starting Snacko was a bit of a risk for Liu and Gonzalez, they can now bring Snacko to life with confidence thanks to the Epic MegaGrant. They originally had no funding opportunities or publisher offers to fall back on – the plan was to try full-time development until they had 30% of their savings left. “We applied for the MegaGrant before deciding to go full-time, and knowing that we had a small chance of getting some money to stretch our time further helped us make that risky decision,” Liu says.

The MegaGrant provided Liu and Gonzalez with financial stability, validation and connections. With money sorted out, they could focus on working on Snacko and collaborating with their publisher, Armor Games Studios. Liu adds that getting the grant “made us feel like we were doing something right. The validation we got from receiving the MegaGrant was sort of like a ‘great job! You’re on the right track’ from Unreal, and that was a big deal to us.” Plus, the connections they formed through applying to the grant and Epic Games events helped them implement Unreal Engine at its maximum potential.

When Snacko releases in the near future, Liu hopes to deliver on her design philosophy, which is “that fun and comfort come first.” Liu says, “I think everyone has a different idea of what a comfort game is, but in my case, it’s the types of games that give you room to be creative without being too open-ended.”

“I hope everyone who plays Snacko can walk away from each play session feeling relaxed and refreshed,” Liu says. She thinks that the pandemic sparked a rise in comfy games, but she hopes that trend keeps going. Liu says, “Games giving you a community that you’ve helped create to escape to when you have a bit of time is something I can never get tired of.”