“In the open world all is change, all is life, all is movement.” – Rabindranath Tagore

What does it mean to exist?

Or, we can be more specific than that. What do you, specific person, believe it means for objects and ideas other than yourself to exist? Maybe you easily say “Of course they exist, independently of me.” That makes you a realist, in the philosophical sense, which is fine but also not a foregone conclusion for people who’ve done the work for centuries. Each person is their own first-person narrator, right? It’s not easy or even possible to prove beyond a shadow of a doubt that everything else exists the same way. Everything and everyone could be a construct.

Ah, so there’s the rub. I said last week that even the hugest games can never be infinite, and at the same time, everything in them is always constructed. Even if a person has written the most advanced AI in history and let it loose to generate a world, now the AI is doing the constructing; and we even constructed the AI, so it’s a creation inside a creation. But how do we create something that acts and “feels” as large as possible? On a reasonable budget? And how do we make it feel good?

For a long time, this was left to text. Technology for supporting the simple language of computing was leaps and bounds ahead of technology for graphics. Letters are almost universally recognizable to English readers (chaotic evil fonts aside), a six-letter word can reveal a lot about a world or a character, and you can expect text to be readable. You can play text games by mail or telegraph! And they’re made of the same set of 26 letters just mixed up, instead of graphics, where the same single 8×8 letter space in just black and white could yield 18 quintillion possibilities.

Eventually, games with graphics started to open their worlds, too. At first it was a hybrid approach, with really simple graphics that were augmented with text descriptions. Games historian Richard Moss detailed this early progress for Ars Technica. Most interesting to me is Mercenary, a Commodore 64 game where it was impossible to die. Instead, you just explored the game’s simple 3D vector graphics, did a little bit of killing or blowing things up, and enjoyed the game’s writing. The nonfatal open world goes back to at least 1985. 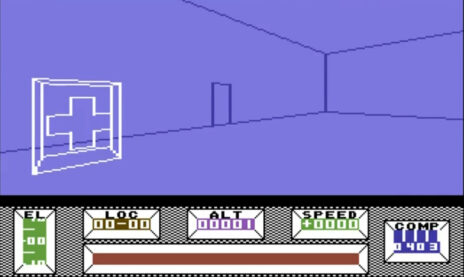 Paradise Killer is an open world game. Yes, there’s a brief tutorial zone that is lampshaded in the lore as the main character’s apartment during a very long exile; and a handful of items and places around the island are unlocked by progressive, metroidvania style “software updates.” But otherwise, you can go almost everywhere, and you can find damning evidence right away.  You can confiscate key cell phones, interrogate most of the suspects, and examine part of the crime scene. Even the software upgrades are out there to be found, simply costing currency or a bit of legwork.

The island is also deceptively large. “Once you get out of the intro, we never try to stop players from accessing any part of the story. The whole thing was, this is going to be completely nonlinear and completely about freedom so the environment has to work with that,” Oli Clarke Smith says. “Do you go and find some collectibles first? Do you go and buy secrets from Crimson first? Do you try and get straight to the crime scene?

“The movements complement that ramp into the game and understanding quite well because it helps the player understand how free they are and that there are no restrictions. There are some locked doors, but otherwise you go where you want. The other thing I’m proud of is that we did manage to achieve freedom and let players engage with things in any order and feel that they’ve understood something when they may not have done [so].”

And as in Mercenary, despite the gory murder story, there is no additional death in the game. The island is dotted with save points, so if you wander into the ocean, you just respawn at the nearest one. You can drop from the highest points on mountains or towering architecture and end up by your friend Doctor Doom Jazz’s yacht. Eventually, it’s useful as a traversal shortcut. There are a number of collectibles that are stranded in locations where you must jump with precision from the top of a mountain. You can’t climb back up, but you can at least quickly get back to the beach.

The traversal patterns in the game are also carefully designed. “A lot of players found it unexpected that in a first person narrative game you’re unlocking double jump and air dash, but I think they slotted in really well and I was quite proud of how natural they become for players,” Clarke Smith says. I’ve played the game a few times now, and in my first playthrough, I didn’t even know the double jump or air dash existed! I still reached everything, and I’m a platforming dilettante at best. But they definitely make gameplay more interesting and sometimes easier.

“When [players] pass through once they go one way and when they pass through the second time they go a different way. It’s always important for the player to master something, and we don’t have any combat, so what do they master? [T]hey master their traversal abilities like the [double] jump, but also they master picking routes through the environment,” Clarke Smith says.

Open world games are common enough, but, as Richard Moss points out in his history, they typically rely on fighting as a main hook. Paradise Killer does have that satisfying world navigation, but that’s not enough. Clarke Smith and the Kaizen Game Works team felt the squeeze as they tried to replace the reward cycle of those fighting games. “In open world games or action RPGs or something, it’s great because every little reward you find can give you some XP, can give you some ammo, can give you a weapon,” Clarke Smith says. “We really struggled for meaningful unlocks.”

The rewards also became a way to lure players all around the island in order to alleviate a design obstacle. “One of the problems we realized too late was that, because all the people involved in the crime are all members of the Syndicate, that clusters them in the northwest part of the island. Carmelina, Yuri, and Witness – and the murder scene is in that corner as well,” Clarke Smith says. “We had to find other ways of making sure there was valuable exploration elsewhere. A lot of people had their positions pushed as far away as we could make [them]. and make sure there was a good reason to explore.”

“The friction that the game provides – key to the open world aspect of any game is good friction between you and the world – became like, every bit of geometry needs to have some way of traversing it,” Clarke Smith says. “Whether that’s to hop up on something, crawl under something, or a ladder, that needs to provide a little bit of friction. And then we need to have rewards gotten everywhere. That’s one of the reasons we had a currency: we could always put a blood crystal down in order to direct your attention to something or reward you. [And t]hat’s why there are so many different lore collectibles.”

Kaizen’s approach represents something I introduced last week, which is Clarke Smith’s idea that this is more like a defanged action game than it is like a traditional narrative mystery game. “I really love stuff like Danganronpa and Phoenix Wright, but they always want you to jump through hoops,” he says. “These games are really cool, but you don’t feel like you’re a detective because you understand the artifice almost immediately and that you’re here to experience a story that’s been set out for you in the order it’s been set out. I love Danganronpa so much, but is it possible to make a game that eschews all of that, has that compelling locked room mystery, but the player can experience it in any order?” 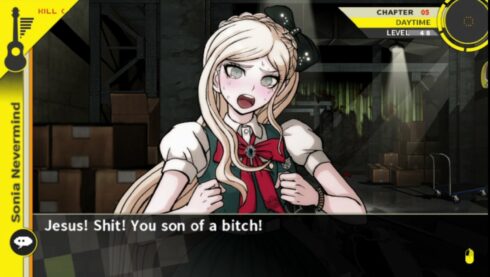 For me, the key element of Paradise Killer’s success as an open world narrative game is removing combat and death. I’m not interested in Yakuza-style fights – I just want to feed cats and do dance contests. Instead of being stressful, running around the island ends up feeling like a lower-key take on Katamari Damacy. I was really reminded of this listening to Clarke Smith talk about the idea of mastery of traversal as a rewarding game mechanic, because in Katamari, it feels so good to figure out where you can go and which heavier things you can now pick up.

Indeed, a defining design choice ended up becoming a strength for players. “It was a limitation that the characters wouldn’t move around,” Clarke Smith says. “But what was good about [Paradise Killer] having fixed characters is it meant you learnt the world and could do laps around the world and plan your routes. We never designed for that, but I think it worked quite well that you learn positions and then optimize your route.”

I’m cognizant of this in some of my favorite games, like Risk of Rain and Rogue Legacy. Once you understand the shapes of objects and rooms you’re likely to encounter, you can mentally cut away the space you never use, the way snow highlights the small patches where people never walk or drive. And actually, traveling all around the island over and over is like a series of runs. Like a ghost in Mario Kart, you’re subtly competing against your own previous best.

One throughline from the earliest text games through Mercenary to Paradise Killer today is the idea of the verb. What verbs can players do? In some text adventures, there are dozens of possibilities. In Paradise Killer, there are still quite a few, from walking around examining the scenery to solving puzzles to picking up over 100 different lore objects. You cross bridges then must climb beneath them. You hop fences, open lockers, climb ladders, double jump off of mountains – the world is your oyster, and it’s waiting on the half shell.

Caroline Delbert is a writer, avid reader, and enthusiast of just about everything. Her favorite topics include islands, narratives, cosmology, everyday math, and the philosophy of it all. Find her on twitter at @aetataureate