Johnnie To is a prolific Hong Kong director whose crime and gangster films have helped to win him an international audience, with champions like Quentin Tarantino. However, I’ve never seen any of them. So, this was my unlikely entry point into his extensive filmography, thanks to a double-feature Blu-ray released by Arrow Video.

Which means I can’t really tell you how representative these films are – to the extent that “representative” is something you can even say about a director who has been described as “multifaceted and chameleonic” by Andrew Grossman at Senses of Cinema. What I can talk about are the films themselves, a pair of surprisingly lightweight and amiable caper flicks in the vein of more recent thriller confections such as 2013’s Now You See Me.

Running Out of Time is not Johnnie To’s best-known film. In fact, if you organize his movies by “film popularity” on Letterboxd, you have to scroll down five entire rows before you’ll find it. Yet, it’s the first feature I’ve seen from this prolific Hong Kong director who, according to his Letterboxd bio, “has made films in a variety of genres, though in the West he is best known for his action and crime movies, which have earned him critical respect and a cult following.” 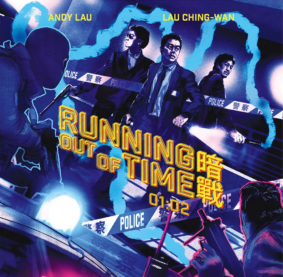 This certainly falls into that category, though those expecting a typically bloody Hong Kong shoot-‘em-up will find Running Out of Time every bit as intense as some of those, but surprisingly bloodless. Instead, this genial flick is all about pitting two masterminds against one another and watching them orbit until they basically fall in love. (On Letterboxd, much has been made of the queer subtext of both films, and it is definitely there.)

Andy Lau plays a Hong Kong expat who is dying of cancer, with only a few weeks left to live. With a score to settle with some members of Hong Kong’s organized crime, he sets up an incredibly elaborate heist plot that the audience is not let in on any faster than our police hero figures it out. Opposing him is Lau Ching-wan as a former hostage negotiator named Ho Sheung-sang, who has been demoted to overseeing janitorial work around the police station.

Each of them is a tactician in the Sherlock Holmes/Hercule Poirot vein, always one step ahead of everyone around them, and most of the fun of the picture comes from watching them bounce off one-another. Naturally, in a movie like this, the chemistry of the leads is of paramount importance and, fortunately, Andy Lau was born to play this sort of character. I’m less familiar with the work of Lau Ching-wan, a frequent collaborator of Johnnie To who has also appeared in flicks like Police Story 2 and Black Mask, but here he provides an able foil and a compelling hero, as much Columbo as Sherlock Holmes.

The humor in Running Out of Time is perhaps a bit too broad much of the time, but the film is so good-natured that it’s hard to hold anything against it very much. And even though it features several (often played for laughs) “no homo” moments, it’s also difficult to read Running Out of Time as anything but a love story between its two male leads. 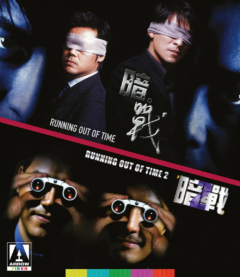 Lau Ching-wan is back in Running Out of Time 2, but Andy Lau isn’t. Which makes sense. While Lau’s dashing criminal was last seen driving off into the (proverbial) sunset at the end of the first film, he was on his last legs and would be dead at any moment. Naturally, he couldn’t stick around for the sequel without some serious narrative shenanigans.

Enter the very pretty Ekin Cheng who, this time out, plays an unnamed thief who is also a magician. Which also makes sense, as some of what he does in the film can’t be explained any way but magic. By the time the story begins, he’s already stolen some artifacts that he’s holding for ransom, all of which has something to do with a big business merger and, honestly, I’m not entirely sure what anyone was trying to accomplish in Running Out of Time 2.

In the grand tradition of most sequels everywhere, this is a pale reproduction of the first film. It hits many of the same story beats, recycles a large part of the cast (with at least one playing a different character), and ends on more-or-less the same note – but it doesn’t earn any of it nearly as much. It’s also a whole lot weirder, thanks to several surreal decisions such as long sequences involving a (frequently CGI) bald eagle, and a foot chase that turns into a bicycle chase, but not before the two characters take a mid-chase snack break to drink some water and eat an ice cream cone – gotta stay hydrated!

If anything, the humor here is even broader and, as I already mentioned, the story makes less sense. None of this is really the reason why Running Out of Time 2 stumbles where its predecessor ran, though. The real problem here is that the two leads just don’t have the same chemistry that Lau Ching-wan shared with Andy Lau. Obviously, they are having a blast chasing one-another around, and Ekin Cheng’s enthusiasm is infectious, but there’s not that sense of fellowship that developed in the first movie.

It doesn’t help that this time Lau Ching-wan’s character is always two steps behind. Part of the joy of Running Out of Time was seeing two masterminds who appeared to always be evenly matched. Andy Lau’s character started out a step ahead, since it was his plan, but the fun of it was watching Lau Ching-wan’s inspector catch up, forcing Lau’s criminal to suddenly pivot and adapt. Here, the foot chase is emblematic of how the whole movie goes: Ekin Cheng’s thief is having a great time, but Lau Ching-wan is always panting a few yards back.

In fact, the most satisfying moments in Running Out of Time 2 – and the only ones where it feels like the movie has anything going on under the hood – are those involving Lam Suet’s down-on-his-luck character, who manages to lose a coin toss 372 times in a row. Perhaps he should have a chat with Rosencrantz and Guildenstern…

I Want to Tell You a Curious Story: The Prey (1984) on Blu-ray
Previous Post