I’m the kind of person that goes out of his way to avoid advertising. Ever since Mad Men, there’s been a trend towards looking at advertising as something akin to art – a way for the creative to cash in and still ply their trade. That’s mostly bullshit. Advertising cheapens everything. It is why there’s nothing good on television. Ratings, essentially the number of eyeballs advertisers will reach when they sponsor a particular show, ensure that only the most inoffensive pablum sees airtime. Advertising is why movies stink so bad. Studios spent the cost of their film over again just to trick audiences to show up to theaters. They’ve learned not to make movies that are difficult to sell.

I once had to make a long, fact-filled argument to convince my sister to see Ratatouille with her kids. She had seen the trailer and was convinced that the movie was another one of those shitty CG talking animal comedies. To make my case, I had to list the quality talent involved with the film. I told her that the picture was by Brad Bird and starred Patton Oswalt (I had to explain who the comedian was). Then I explained that Ratatouille was a movie about art and the creative process. Sadly, that’s not the kind of pitch that fills movie theater seats. The trailer for Ratatouille had lied to my sister and scared her off. But that is how you make money in Hollywood. You try to make something that a good part of the country will like, then you trick the rest of the population into tagging along. Good movies struggle in this toxic environment, if they are are allowed to exist at all. Most people who want to make something different, something personal or something that doesn’t insult your intelligence frequently have to go outside the system. And when something akin to art does happen to come out of the machine, it is damn near a miracle.

Advertising, marketing and the need to turn a profit really does poison the creative well, making safe bets the most common bet and making outsider art anathema.

Despite contributing to the darkest of the arts as a freelance copy writer and consultant, I still see the truth in what Bill Hicks had to say about advertising and marketing. “You are the ruiner of all things good,” the great prophet once said. “You are Satan’s spawn filling the world with bile and garbage.” Sure, his rant is an act of Swiftian hyperbole, but there’s that kernel of truth that you can’t deny. Advertising, marketing and the need to turn a profit really does poison the creative well, making safe bets the most common bet and making outsider art anathema.

Yet, once a year, I subject myself to a week of sales pitches, infomercials and trailers designed to appeal to the lowest common denominator. I attend E3, the world’s biggest videogame trade show, and subject myself to hours upon hours of this crap. And I wonder why I’m becoming increasingly disillusioned with games – it’s like going into McDonald’s and complaining that the food isn’t very good. Every year I hear people proclaim that the show was all shooters and gore, but its hard to remember a year when the convention center wasn’t dominated by that stuff.

I try to think back to my first couple of E3s, which were sometime around the turn of the century. The more I think about it, things really were a little different. I think that’s because the people who make and sell games were still a little naive. You could always count on putting hands on one mind-bending, weird game – the kind a videogame executive would cancel in a heartbeat. One year it was Katamari Damacy. Another year it was Okami. I still remember vividly the excitement around the first Guitar Hero. “Did you play that guitar game?” you’d hear other attendees ask. “It was actually fun. And the music was awesome!” Back then, I put up with the boring press conferences (and man, were they dull) because I could count on being wowed and surprised later by the odd stuff  tucked away on the show floor.

At this year’s E3, that stuff was few and far between. This is, in part, because indies are filling the gap. Tons of small teams are making quirky, visionary games for the iPhone and PC but this stuff was largely unrepresented at E3. The IndieCade booth in the hallway between the two massive halls was the one inspiring exception. This year’s E3 is proof that the Los Angeles Convention Center was truly dominated by big budget murder sims, and I find it more than a little unappealing. 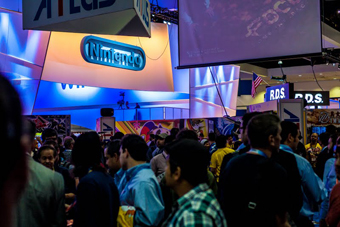 E3 (and the industry for that matter) needs a reboot.

Everybody complained about the E3 in 2007 that was held in Santa Monica hotel rooms rather than a convention center. It was a pain in the ass to travel from hotel to hotel, but that year also felt refreshing. There were no towering videoscreens replaying the same graphic murder over and over. Booth babes were virtually nonexistent. And games still felt a little more diverse. Sure, a Halo sequel was still the next big thing, but that was also the year that Nintendo announced the Wii Balance Board. The instinct to tear down those huge, expensive convention center booths was correct.

I was going to say that E3 is never going to be the Cannes Film Festival. Then I remembered that the French film festival isn’t the sober unspooling of art films one might expect. It is also a film market – a place where movies are bought and sold to distributors. The place is a lot like E3 – a circus of promotion, pitches and parties.  The year I went to Cannes (that’s a whole ‘nother story) I was appalled to learn that a colleague’s favorite screening was Shrek. You can lead a horse to water, in this case a film festival where much of the year’s international cinema will debut, but you can’t make the dummy drink.

The problem with E3 is that it is all Shrek now. That’s the fault of our industry. The big publishers need desperately to diversify before our reputation as a medium for adolescent boys sticks and can’t be erased. The people who run E3 can be a part of this change. Last week the Los Angeles Times reported that E3 might leave Los Angeles because of construction that would close the convention center.

Fuck the convention center. We need an E3 where all sizes of games can share the conversation – where games that appeal to everyone, and not just the shooter demographic, feel at home. If that means inviting fewer people or scaling down the show, then so be it. It is time to put the old dinosaur down and start over.

Pretension +1 is a weekly column about the culture (and occasionally the business) of video games. Follow Gus Mastrapa on Twitter: @Triphibian.