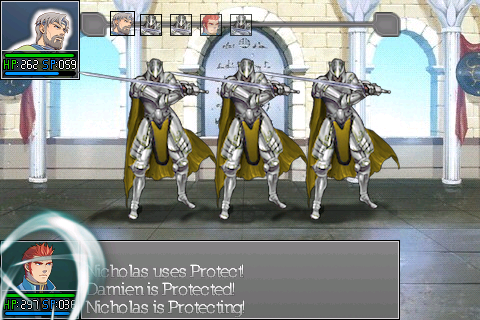 I know that when I tell you Team Unwinnable loves RPG’s, I speak the truth. From Final Fantasy to Dungeons and Dragons, there is a special place in each of our hearts for those games that filled our childhood (and teens…and twenties…and thirties) with sorcery, adventure and a frustrating chain of disoriented companions.

But it isn’t nostalgia that keeps us attached. We don’t sequester ourselves in our bedrooms late into the night, staring with bloodshot eyes at Ultima 3 just to keep the dream alive. No, it’s the innovation, imagination and artistry that keeps us playing, and when SRRN Games let us have a shot at their new 16-bit, turn-based RPG, Ash, for the iPhone last week at PAX East, we let fly a collective sigh of relief – it was 1990 again.

What makes Ash great isn’t its smooth gameplay, crisp art or option of an NES-style touch sensitive control – it has all of that – but its commitment to gaming as an experience. To achieve this, writer Aujane Abadi focused on a narrative that poses the question “How does a man deal with tragedy in his life?” This investigation subsequently branches out into not only themes of filial love, but into an examination of intra-, inter- and extra-personal conflict (who ever said ambition was a bad thing?) which are distilled within the game’s unveiling universe.

In brief, the game follows Nicholas and his pseudo-son, Damien, two mercenaries in the ruined Empire of Aghaus. A simple twist of fate finds the pair immersed in a larger continental conflict during which the personal stories of the two come to the fore.

Central to the story actually working is the notion of immersion. The design of the game is wholly contingent on Ash being a cohesive experience – the writing has to work with the design as much as the game has to resonate with the player. Says designer Tyler Carbone, “Everything is designed to both tell an interesting story and transport people back to the time of the SNES glory days.” In inviting gamers into a comfortable, nostalgic universe, Ash succeeds as a game that is not only compelling, but is thoroughly playable in spite of its being limited to the iPhone.

Since PAX, Ash has risen to #3 overall in RPG’s and is rising at a consistent pace up the ranks of overall paid downloads. And that should come as no surprise for a game that’s equal parts Shining Force and modernist novel.