This is an excerpt from the cover story of Unwinnable Monthly #153. If you like what you see, grab the magazine for less than ten dollars, or subscribe and get all future magazines for half price. 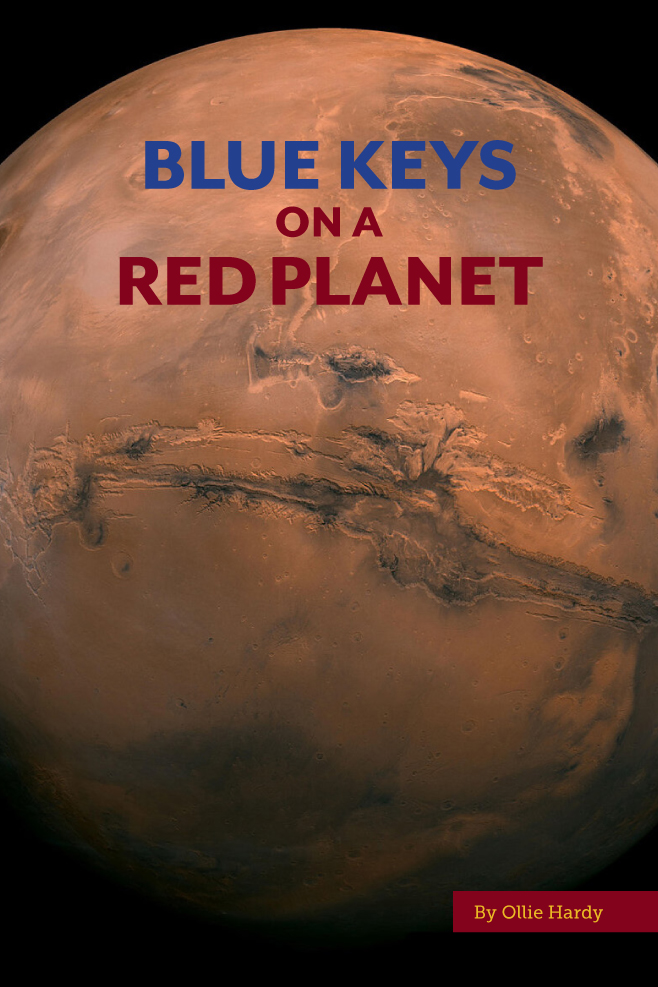 After a difficult time finishing a PhD on the topic of the long delayed, possibly indefinitely, European Rosalind Franklin Rover, I was done with Mars. It’s cold, it’s barren and during multiple lockdowns it seemed further away than ever. In an attempt to reignite the allure of uncovering the mysteries of life on other planets I turned to videogames. I will never walk on the plains of Oxia Planitia or scale Olympus Mons, I might not live long enough to see anyone go to Mars but in videogames I can spend a few hours there virtually.

Although some games strive for realism, this is often the illusion of realism. Each game world is a delicate balance between the players expectations, the technology available and the conditions under which the game developers exist. Grand Theft Auto‘s Liberty City isn’t New York but it sets the stage to play out the fantasy of a small-time criminal making it in the big city. When it comes to Mars, I want the fantasy of being on Mars and as such it would be frankly immoral to ask an artist to sculpt sulphate veins in lacustrine sediments when some red sand and black rocks would suffice. It doesn’t need to be a 1:1 Mars, instead I can enjoy piecing together how the fantasy has been constructed.

The fantasy of Mars is always brought to us through a filter of technology. In the same way that the Liberty City of Grand Theft Auto III could not be the Liberty City of Grand Theft Auto IV, our idea of a location changes with time. This too holds true for Mars but on the scale of a generation, it is not Mars that has changed, but our understanding and conception of Mars. This conception is created through an iterative scientific process that has been disseminated through education and popular media. For this reason, and to put into context the idea of scientific progress that I was losing faith in, I turned to the Doom series. Playing through id Software’s defining series I couldn’t help but feel a kinship with Doom. We are both roughly the same age, have spent a third of our existence thinking about Mars and seem to fluctuate between awe and sheer contempt for the red planet. 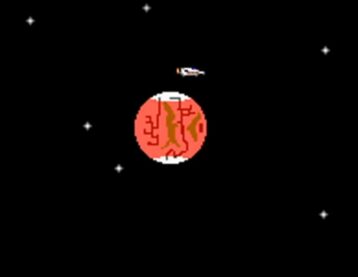 Id Software’s first game on Mars was not 1993’s Doom, which is actually set on one of Mars’ moons but 1990’s Commander Keen. Commander Keen is a relatively child friendly platforming game designed to show off id’s ability to smoothly scroll games on a PC similar to Super Mario and cater to the same young audience. Eight-year-old Billy Blaze heads to various buildings on Mars to reconstruct his homemade spaceship and defeat little green aliens called Vorticons. As Billy triumphantly flies home at the end of the game we are treated to a charming view of Mars. The icon has a distinctive red color, north and south polar ice caps, a depiction of the deep Martian valley, albeit shifted 90 degrees and what appears to be the apocryphal canals of Mars which were an artifact of early telescope imaging. It is something the Galileo might have drawn in MS paint.

In the story of Doom’s creation, as told vividly by David Kushner’s book Masters of Doom, the core id Software team were desperate to flex their creative talents and showcase their cutting-edge technology and transgressive sensibilities. Doom (1993) seems to be ambivalent to Mars. The bright red planet is where the kid’s games take place. This is the more serious game set on the isolated grey moons that share their name with the mythological personifications of fear and despair. In the first episode we see Phobos in the map screen between levels with the outpost nestled in a double impact crater which closely resembles the large Stickney crater. Through the open windows and ceilings there are mountain ranges, which designer John Romero claims are scanned from a book on Chinese mountain ranges. As a design decision this is less accurate but more interesting than a black sky it would however have been nice to see Mars from the orbit from Phobos. 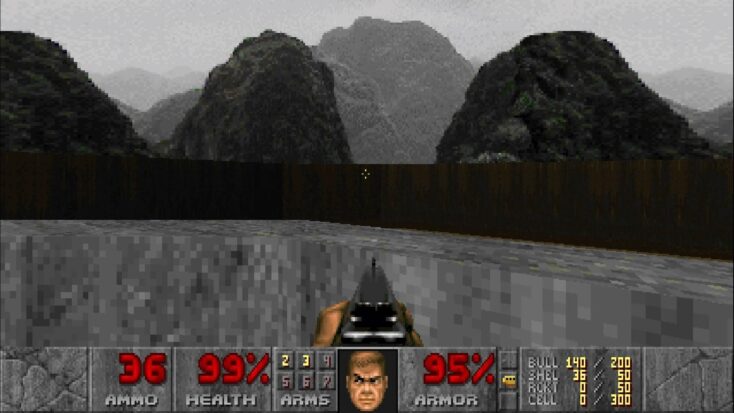 Doom’s engine is a very clever piece of sleight of hand to present a 3D world. There is little attention paid to simulating Phobos and the game is more concerned with hallways and spaces to create interesting combat encounters. For example, there is no concern for a lack of atmosphere or the low gravity; on Phobos a good, solid jump will send you straight off the moon. However, Phobos’ function within the story as an isolated hazardous waste dump is logical. The low gravity makes Phobos an attractive staging post for a future manned mission to Mars. One of the big challenges with safely landing on Mars is that the gravity is strong enough for landing to have a serious impact, figurative and literal, but not enough atmosphere to allow for your mission to slow down for example with a parachute for a soft landing. If you were to start on Phobos to extract resources then it makes sense that over time, if operations were established on Mars, that Phobos would remain an old industrial site perfect for hazardous storage or nefarious interdimensional teleportation experiments. 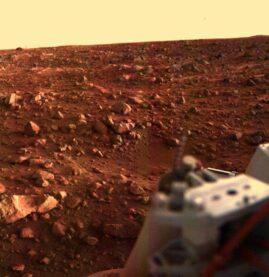 In terms of the popular conception of Mars through the lens of exploratory missions, Doom emerged at the end of a dry spell for Mars missions. To that point, the last successful mission to Mars had been the twin Viking landers in 1976. Mars has rocks and dust and no organics. The Viking landers carried a set of exobiology focused experiments which returned ambiguous results at best. The results suggest that Mars is not a graveyard, it’s a place where nothing was born. For Doom, Mars is simply the vector to usher in the game; they really want to make a battle against the endless hordes of Hell.  Under the shareware model that Doom was released using, the later chapters when the player is transported to Hell are the chapters which were sold and by the second game Mars has been completely eschewed for a battle across Earth overrun by demonic forces.

A decade later, id Software returned to Mars for Doom 3, a strange game tasked with reinventing a game that defined first person shooters. Launching into a now crowded genre with a weight of expectations, Doom 3 interprets the essence of Doom as a tense and atmospheric navigation of corridors in a militaristic base. Industrial and lived in, Doom 3 takes a healthy dose of inspiration from Valve’s Half-Life. To Doom 3’s credit, the spirit of technological innovation remains with the visuals still holding up 20 years later and though maligned at the time the use of light to sacrifice vision for violence was bold and deliberate. In some ways, it is unfortunate that in the versions of Doom 3 on sale now have canonized the “duct tape mod” allowing for a torch and gun to be used simultaneously, this despite subtitles remaining absent. An example of game mechanics contrasting with realism. 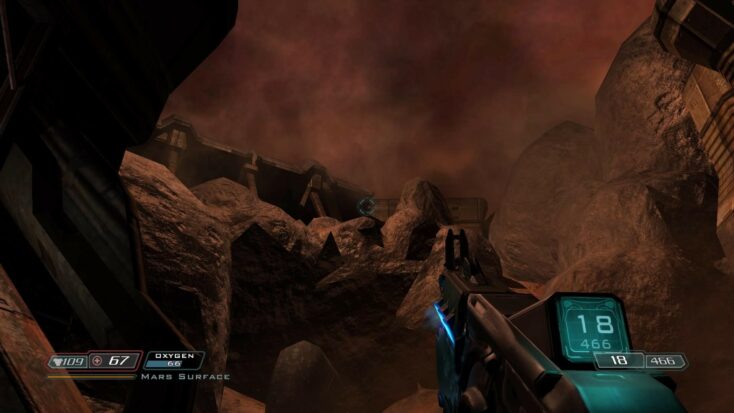 When Doom 3 loads up you are greeted by a rotating graphic of the top third of Mars. Whilst lacking many of the distinctive features that later Doom games would emphasize in their macro images of the planet, the heavily cratered surface reflects both an increase in game play resolution and also imaging data from satellites since 1993.  The Mars of Doom 3 is brutal, your marine is quite comfortable ripping and tearing in Hell but exposure to the surface drains your health. You seldom spend time on the surface, but in the moments, you do, the foreboding, red, oxidized dusty atmosphere and black basalt outcrops look incredible. Instead, you fight your way through an underground complex that could just have easily been under the ocean, on the Moon or the Antarctic. The descent to the heart of the planet can be contextualized in that by 2003 the surface of Mars had been mapped to a reasonably high level of detail by missions such as the European Mars Express and the Nasa Mars Global Surveyor satellites.  The planet wide mapping of the outer surface pushes investigation and mystery to the subsurface of Mars, which is still a major direction for planetary science and Exobiology research.

At the beginning of the same year that Doom 3 was released the two Mars Exploration Rover missions Spirit and Opportunity began their operations on Mars. It is hard to say if Spirit and Opportunity influenced the development of Doom 3 but I have no doubt they and their follow up missions must have informed the ideas of DOOM (2016) and represent a shift in the general consensus of Mars. First of all, it is almost impossible to not ascribe some character to the rovers, their spectroscopic cameras mounted on a mast form a recognizable head and face. Mars is surely softened by the idea it is inhabited by inquisitive robots. The science that the Mars Exploration Rovers conducted also provided ground truth that Mars once had substantial periods of liquid water on the surface.

All the successes and cultural cache accrued by the Mars Exploration rovers was expanded upon by the Mars Science Laboratory better known as Curiosity. Dramatically touching down in 2012 with unprecedented accuracy using the novel skycrane concept, the rover would take the lessons learned since the Viking landers to locate organic matter and habitable conditions. There may have been life on Mars but even if not we have many of the ingredients in place to support future manned missions. The lessons of Spirit, Opportunity and Curiosity moved into the culture and Mars had something of a moment around 2015 – 2016. Ridley Scott’s The Martian showed audiences that Mars is hostile but if taken one step at a time manageable, Call of Duty even swapped its nondescript middle eastern deserts for Martian deserts and Doom was back.

Ollie Hardy has just completed his PhD on the subject of the European Rosalind Franklin rover and found this trip through the DOOM series very cathartic. He isn’t sure what the future of Mars exploration is, but he would like to be involved. He’s always happy to talk about Mars, games and games set on Mars. He can be found on twitter at @hilverofmars.

You’ve been reading an excerpt from Unwinnable Monthly Issue 153.

Gunpowder in the Rouge

Fragged!: Translating DOOM to the Tabletop via a Somewhat Unlikely Route