This essay contains spoilers for routes A and B of Nier: Automata.

Machine lifeforms in Nier: Automata – from their most basic configurations to their most complex – are built for utility, not gender. Round metal heads, featureless if not for a symmetrical pair of glowing eyes. Cylindrical bodies of varying heights unequipped with signifiers, masculine or feminine. Some machines gender themselves by drawing eyelashes or lips onto their spherical heads. Others paint on suits or wear bows. One machine lifeform, named Simone, eats her friends and accessorizes with the skinned corpses of female androids. She welds their metal husks together into a cinched waist and lines the hard plating of her ballgown with their internal armories. Simone’s desire for beauty summits in a macabre pantomime of femininity inextricable from theaters of war both literal and metaphorical.

Simone desires beauty because she desires desirability. Like her namesake, Simone de Beauvoir, she falls in love with a Jean-Paul, but unlike the human philosopher, she is willing to engage in any taboo or transmutation to make herself beautiful and win his affection.

“After researching the old world, I finally learned the truth.
Beauty is pretty skin.
Beauty is stylish accessories.
Beauty is looking one’s best.”

Android and machine lifeform alike were brought into the world of Nier: Automata with only the “dead and rotting ideologies of humanity” from which to glean and suss out some manner of not only existing as persons, but doing so together. Simone, like many of her robotic peers, grafted together what disparate tissues of ethics, ideals and desires she could find. With humanity long absent, no one is left to warn her or any automaton that even living within the full contexts of those ideologies – historical or contemporary – was not enough to save them from disease, disaster, or each other. Thus, Simone pumps what she can from the well and sows the seeds of her demise.

Many philosophers are invoked in the names of machine lifeforms encountered in Automata to varying degrees of irony. Marx and Engels are gargantuan, living factories; the means of production not seized, but embodied. A machine named Pascal criticizes the human Nietzsche’s work. The irony in Simone’s nomenclature is delicious. Just as the machine lifeforms seem to only attain a surface level comprehension of humanity’s past philosophies, the player need not be an expert on de Beauvoir to recognize what Yoko Taro and the team at Square Enix were gesturing at. In introducing Simone the machine, they conjure one of de Beauvoir’s most famous phrases, “one is not born, but rather becomes, a woman” and through Simone the machine’s life and lifestyle, both manifest and pervert it.

De Beauvoir wrote to elucidate the socially constructed nature of gender: it is embedded from birth and nurtured until one becomes the assemblage of norms and values which align with either male or female (when gendering within a binary, as popular culture is wont to do). Simone, through the consumption and subsumption of other automatons into her own body, shapes her frame into an increasingly “ideal” feminine form. She not only becomes a woman physically, but does so within the constrictions of beauty standards for human women; snatched waist, beautiful gown, accessories, lovely voice, etc. The irony here being that de Beauvoir wrote to steer women away from feeling confined to the set of norms and values which patriarchal society deemed “womanhood.” Simone instead literalizes the idea in grisly fashion.

In con-subsuming other machines and decorating her body with the flayed corpses of other women, Simone the machine acts in stark opposition to de Beauvoir’s agenda of empowering her fellow woman. Another misinterpretation of de Beauvoir’s field of study lies at the end of Simone’s backstory flashbacks. After being rejected by Jean-Paul despite her ruthless pursuit of gendered beauty, she reflects:

“I gaze into the mirror. In its reflection, I see only my own meaninglessness. And so I scream.” 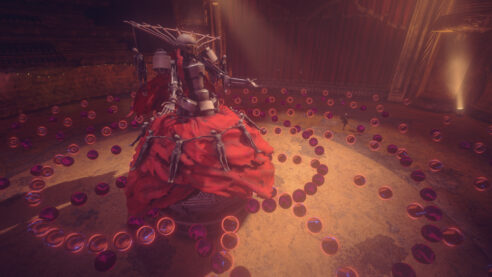 Again, a surface level understanding of the existentialist ideas de Beauvoir traded in. Broadly, meaninglessness in existentialism refers to there being no inherent meaning to life. No god, or government or authority can determine a person’s purpose or reason for living their life. However, a lack of inherent purpose need not necessarily equate to immediate despair, as we see in Simone’s flashback. Rather, existentialist philosophy is concerned with people determining their own meaning or purpose with their own agency and free will. Ignorant and purposeless, Simone lurks in an abandoned theater nested away in a machine-run amusement park. When the player steers YoRHa units 2B and 9S to her lair, they become a literal captive audience to her theater of war.

Simone could not find meaning in her pursuit of beauty, but her body–augmented and enhanced by other machines and androids–has all the while become an increasingly potent weapon of war. Machine lifeforms are built for utility, not gender, and their primary use is violence. War and beauty may sound incongruous, as though Simone is personifying yet another irony, but alas, armed combat and aesthetics have long been bedfellows.

An obvious example: lipstick. It’s no coincidence the component holding the lipstick itself is shaped like a bullet. After World War I, some factories which produced bullets for the war effort used a nearly identical set of processes to produce lipstick containers. “This kept people good at making bullets.” To keep cosmetic companies from going under during World War II, beauty products were framed as cultural morale boosters; supporting the troops by uplifting the spirits of women at home who would then send letters to the front coated in lipstick kisses. It’s a kind of ritual. Swipe a bullet across your lips and stain them with a prayer that other bullets, away and out of sight, find purchase in the flesh of your enemies.

Bullet-shaped lipsticks persist in perpetuity and there are historical accounts of factories which made cosmetic powders producing camouflage creams and gunpowder. Historic fashion houses have varying ties to the Third Reich. Today’s Wonder Woman is played by a former Miss Israel who served in and supports the IDF. Beauty and war never fail to take the stage together and Simone commands the spotlight thusly; both the feminine pin-up portrait and the bombing plane on which its painted. Beauty, consumption, capitalism, and warfare enmesh together in the same way Simone con-subsumes others to enhance her beauty and in doing so becomes a more potent weapon.

Structure and mechanics in the Drakengard and Nier games blur the line between the diegetic and the not, especially when it concerns music. Automata links Simone’s performance with the soundtrack directly, bleeding that diegetic line by timing her attack pattern with a transitory moment in the background music accompanying her boss fight. As Emi Evans’s vocals ease away and those of the operatic chorus build, Simone lets loose a stream of damaging lasers set low to the ground. She then slowly rotates, forcing the player to leap and dance around her; rising and falling like a painted horse on her carousel of death. Later in the song, as J’Nique Nicole’s verse ends, Simone stops her attack pattern and (through graceful jet-propulsion) floats onstage to begin the next act of her deadly performance. Even the circles of light tracking both Simone and the player androids come from the actual spotlights hanging on each side of the stage. Theater, beauty, art, music, violence, violation, death and desecration swirl as Simone and the YoRHa units share an evening of glamour and gunfire.

The endpoint of beauty’s entanglement with war is the enforcement of beauty standards (read: eugenics) by hegemony. From the “ugly laws” in the United States to the promotion of the Aryan race in Nazi Germany, the violence doesn’t end when the bullets stop firing. The breadth of Simone’s desires, however, are interpersonal and her potential to fulfill those desires ends when 2B and 9S destroy her in the events of Automata. Nevertheless, though Simone embodies more than a little irony regarding her namesake, her opéra macabre is a wondrous spectacle of the kinship between the pursuit of beauty and the dealing of death.