I don’t like Spiritfarer. Wait, I should back that up real quick before someone sounds the alarm.

I don’t like Spiritfarer for the reasons I thought I would. As a game critic, I’m most preoccupied with the storytelling and aesthetic aspects of games that are inspired by other literature and media. And Spiritfarer has both of these elements in spades. Gorgeous whimsical cotton candy sunrises and moody sunsets with Ghibli-esque cumulonimbus clouds, stylized animated characters that hearken back to golden age Disney and forward to surreal bandes dessinées or French comics which also often contain stories that don’t shy away from existential themes . . . not to mention a casual representation of a dark-skinned protagonist (which I appreciate even if Stella does fall rather squarely into the Ambiguously Brown category of representation). When I realized that I wasn’t attached to the game’s death-positive narrative so much as I was attached to the ethos I perceived behind its narrative design, I decided to explore those feelings and realized the root of it: Spiritfarer is perhaps one of the most authentic solarpunk games out there today.

For those unaware, solarpunk is a movement that’s arisen in the past several years that seeks, through speculative fiction, aesthetics and activism to answer the question of how a truly sustainable world could become our reality. With that in mind, Spiritfarer’s narrative design is uniquely solarpunk not only in tone, but in structure as well. Spiritfarer’s central themes reflect this movement’s brief, focusing on death-positivity and nurturing a community are also accompanied by strong currents of anti-capitalism, an emphasis on maker/DIY culture and promoting sustainability. Throughout the game, despite having access to the usual store stalls one finds in many action games and RPGs, the player is often made aware of the gouging prices of Raccoon Inc. (perhaps a not-so-subtle jab at the raccoon-like Nook family in Animal Crossing), participates in a union protest with Astrid (one of the spirits who Stella helps make their final crossing) and is regularly chastised or advised by other characters for simply accepting the state of affairs set up by the monolithic corporation (think of Beverley, who scoffs at you if you don’t at least try bargain hunting once). There’s even a spirit, Summer, whose whole character arc is coming to terms with the ecological impact of her chemical-laden engineering for corporate farms. And it doesn’t stop there either. 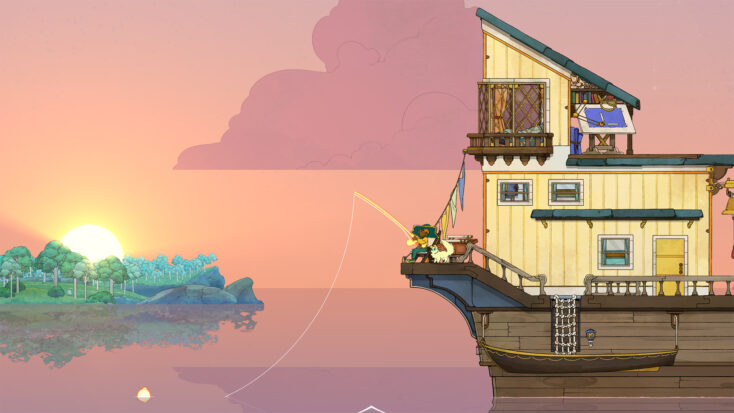 Besides characters bemoaning oppressive pyramid schemes at their workplaces and the dissolution of some landscapes into giant collections of neon signage and spastic video ads displayed on LED billboards, you are also made aware of how even your material hoarding for your DIY projects is problematic. For instance, when you are given the option to saw trees down for wood, there’s a comic-relief moment in one city park level that highlights how absurd it is for you to feel entitled enough to saw down every viable tree you come across, as an eco-activist chases you around yelling things like “Murderer!” and “Gaea!!” There are countless examples of counterculture like the above, whether you’re on land or at sea. But despite all of the above, there is one unassuming core design pillar that I would argue is the most solarpunk of all Spiritfarer’s narrative design: cooking.

One could argue the pillar is just generally customization and they wouldn’t be wholly off base. But at the heart of solarpunk’s influential movement (in both literature and political action) is a blazing flare of optimism, tempered with a healthy amount of pragmatism. Having “cooking” for your wayward spirits onboard be the driving force of spreading that optimism is fitting. Not to mention that nurturing these spirits to a point of acceptance for moving on links this mechanic with a related theme that I feel has a lot of potential in games that don’t shy away from their political side: nostalgia.

Nostalgia is often looked on with suspicion, especially in gaming and politics, and with good reason. During the 2016 election these two arenas indirectly influenced one another, which made a good part of its rallying cry around the kind of reactionary nostalgia that inspires destruction of the present in a desperate attempt to reconstruct an oppressive past. On a less serious note, nostalgia also often inspires needless debates about whether present game design measures up to past game design resulting in phenomena like difficulty fetishism and an almost fanatical fixation on 8-bit styled graphics and platformers (often occurring in tandem in game design). But nostalgia can have progressive effects on the other end of the political compass as well, and Spiritfarer’s nostalgia is very much rooted in memories that can restore one’s relations to self, loved ones, the broader community and coming to terms with your past regrets. 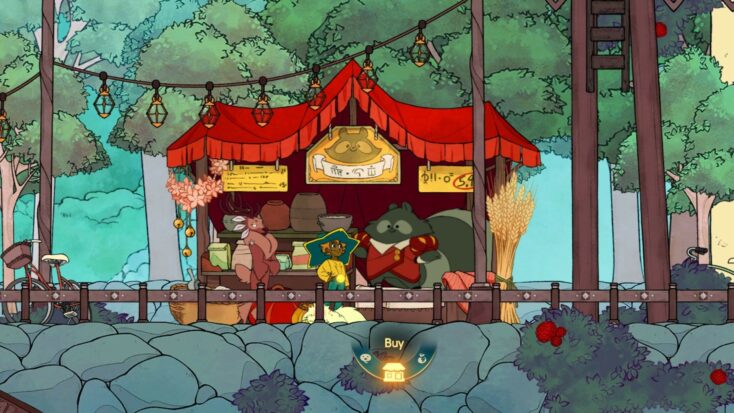 This might sound grandiose, but think of how a spirit like Atul, or Bruce and Mickey are elevated or forced to reconcile with past grievances and make peace (with themselves and others from their respective pasts) via their favorite dishes. The former clamors for fried chicken only to find upon eating his favorite dish that he’s weighted down by memories of his overworked father and how he’d view cooking as something to be conquered instead of something pleasurable and an excuse to spend time with his family. To remedy the depression these surfaced memories cause, Atul plans alongside Stella, his niece, a feast of favorite dishes for the passengers on the ship as a parting gift. The latter, a pair of gangsters with notoriously picky tastes, when nurtured enough reveal that garlic bread is their favorite dish because they believe it’s what sustained their mother’s health throughout the years. Eventually Bruce, who represents both him and his brother Mickey, reveals despite all his posturing in life as a small-town gangster, that none of the glitz and bravado meant anything once he lost his brother. 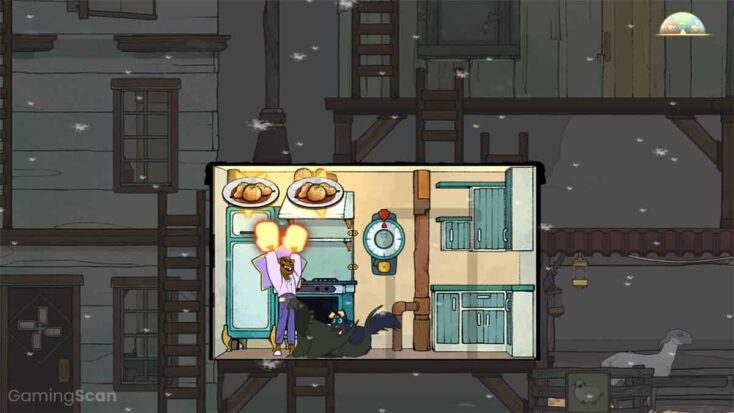 Food and memory are widely talked about, especially in literature and TV culture, but often goes unremarked in gaming. At most we’ve mostly seen food used as a superficially attractive or as a simple health mechanic (buffs and debuffs in Genshin Impact is just one example) or as a mercantile item. Spiritfarer’s food is tied directly to memory, but also functions as sustenance and a marker of the diverse cultures and standings of the spirits (you can practically make everything from basic North American bacon and eggs, to Swedish surströmming, to Southeast Asian laksa). This last element of food I believe also relates to another solarpunk element, as it’s a movement that seeks to decolonize our world and recognize the diversity of all humans and their connection to nature and each other. That may be a little reaching, but it’s something to think about. There’s also been a rise in recent years of games that explore food and its connections to culture and politics, some notables including the upcoming Venba, Soup Pot, Necrobarista (another death-positive game), Coffee Talk and The Red Strings Club.

James Gifford, a professor of English at Farleigh Dickinson University in Vancouver who often explores the intersection of fantasy literature and anarchism, and who in recent years has been doing some critical work on RPGs and game novelizations, wrote a short essay titled Rue Sainte-Ursule which was read for the anarchism research group’s essay podcast. This essay describes a personal revelation Gifford experienced while abroad in Toulouse, in which he realizes that within small moments of freedom in the present (exploring a town, buying a familiar book in a foreign language, or drinking a negroni) we trigger nostalgia that is not consolatory and pacifying, but instead fuels us with an intense disappointment. He argues that it inspires us to step off seemingly predetermined paths in the present to find a new path for ourselves and others.

In the podcast version of this essay, there’s a short introduction included where he explains how bittersweet nostalgia like this can be connected to Simon Critchley’s politics of disappointment, where one realizes “something fantastic has failed” and that by “living through that unsuccessful attempt at something better” we’re galvanized to find a way forward, on both a personal level and as part of a political movement. Spiritfarer’s cooking mechanic is connected to these politics of disappointment and nostalgia, because despite the initial cozy implications of cooking as an act of caring for the spirits you’re shepherding to the other side, cooking often forces these spirits to confront their past mistakes and regrets by using the powerful connection between food and memory. Cooking is also the only mechanic in the game that remains slow-paced even after an upgrade, which ties into Gifford’s sense of everyday moments between obligations that activate that regret-laced nostalgia.

As a death-positive game, Spiritfarer is free to dispense with any potentially cloying and sanitized representation of death and allow for spirits to speak of how their bodies and minds were worn down or were in some cases broken over their lives. Some died violently, or of incurable diseases before their expected time. Some spirits, like Astrid, are so bitter at their parting at the Everdoor that they leave Stella (and likely the player too) wondering if they did the right thing by reminding them of their unfinished affairs and unresolved feelings. Gifford posits near the end of the introduction to his essay that perhaps what anarchy needs is to balance the fantasy of memory with the fantasy of theorizing a utopian future. And although solarpunk has its kinks to work out, chief among these divorcing itself from techno-solutionism and corporate greenwashing, it stands a good chance of striking this balance.

What Spiritfarer’s brand of solarpunk shows us, via its cooking mechanic, is how game narratives can communicate how everyday moments and actions can have transformative power. By showing us the power of the mundane, Spiritfarer enacts solarpunk philosophy. And that’s what I like about this timely game.