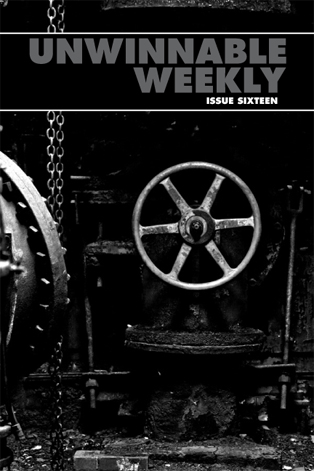 It took me the better part of an afternoon to come up with a headline for Andrew Smith’s story on digital literacy in this issue. Sometimes, the brain just doesn’t want to give you what you need.

In this particular instance, I blame the fact that it was my initial desire to name the piece “Hot for Gamer,” a reference to that most amazing of Van Halen songs, “Hot for Teacher,” off 1984. As much as it amused me, I decided it probably wouldn’t amuse anyone else, least of all Andrew himself. Desperate now, and with the double bass intro thundering in my ears, I turned to the lyrics, thinking I might find some inspiration there.

After childishly replacing key words with videogame jargon (“I brought my joystick, gimme something to play on, man”) I abandoned that plan. In the end, I opted for a gentle play on the name of the game key to Andrew’s story.

But why I am I telling you this?

Mostly to get “Hot for Teacher” stuck in your head.

It is particularly interesting that Andrew filed that story with us way back in June, and yet it remains a valuable insight into some aspects of the #GamerGate controversy.

Also in this issue, Nathaniel Wattenmaker grows up (a little bit) and kicks his competitive gaming habit and Brian Bannen discovers how Joel Schumacher’s abysmal Batman movies actually saved the franchise. Finally, in our cover story, Jeremy Signor investigates the parallels between his anxiety and certain games like Silent Hill and Lone Survivor. That last one features photography from myself and longtime Unwinnable contributor Brian Taylor. Hope you dig it.

Got something to say? Say it to me at stuhorvath@unwinnable.com.

This is a reprint of the letter from the editor in Unwinnable Weekly Issue Sixteen. You can buy Issue Sixteen individually now, or purchase a one-month subscription to make sure you never miss and issue!