My spouse basically only likes one videogame, and that’s Tetris. (That’s not quite true; they also like Snake Rattle ‘n’ Roll and a handful of others.) In fact, they like Tetris so much that I get them pretty much any Tetris-themed thing that I see, from socks to glassware to night lights and beyond.

Fortunately, Tetris has been merchandized to hell and back, so there are plenty of Tetris-themed gewgaws around our house, not to mention a wide array of ways to play the game in videogame form and, what’s relevant for this column, innumerable attempts to translate the classic puzzle game to the tabletop.

In fact, a little internet sleuthing suggests that there have been Tetris-themed board games since 1989, the same year that Tetris was first released for the NES, though versions of the game had been in existence since 1984. Among the earliest attempts to translate Tetris to the table were 1989 family board game versions made by Tomy and Milton Bradley. I’ve never played those, though in reading about them, there are aspects of gameplay that seems familiar from more recent versions.

Of course, the world of board games is very different today than it was in 1989, and the vast majority of attempts to bring Tetris to the world of tabletop gaming have taken place in the 21st century. There have been card games and a Tetris version of Jenga, to name a few, but the most common version of Tetris on the table is some variation on the classic game Connect Four, usually involving several upright “matrixes” into which “tetrominos” (the trade term for those colored, shaped blocks that are the whole game) are dropped.

Often, as in one of the most recent, the simply-named Tetris Strategy Game from Buffalo Games & Puzzles, this takes the form of a kind of competitive solitaire, with each player taking charge of their own matrix and their own pile of tetrominos, and simply competing to see who can ultimately rack up the highest score. In some variations, such as that earliest Milton Bradley version, there are ways to foist off unwanted tetrominos on your opponents, while others allow you to do things like occasionally skip a piece that you don’t wish to play. 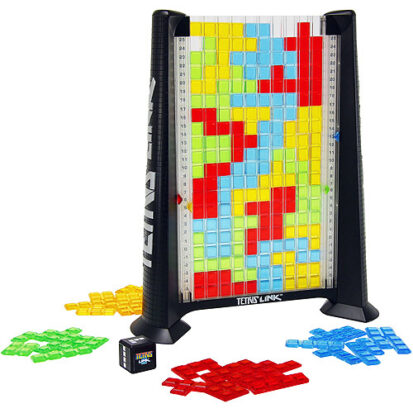 It should also come as no surprise that these games succeed to greater and lesser degrees, depending both on what they’re trying to accomplish in the first place, and how well they’re executed. Jenga Tetris, for example, is all-but unplayable, due to the sturdy wooden blocks of regular Jenga being replaced by hollow tetrominos of lightweight, slick plastic that are basically impossible to stack in the first place, let alone actually remove and place to play a game of Jenga.

As I mentioned, my partner is very into Tetris, so I’ve gotten the chance to try a number of these games. Besides Jenga Tetris, we’ve tried our hands at Tetris Link from 2011, which boasts of winning several Good Housekeeping “Best Toy” awards, as well as the Tetris card game from Fundex and, most recently, the aforementioned Tetris Strategy Game.

Tetris Link and the Tetris Strategy Game both probably come closest not only to replicating the play of the classic videogame, but to representing the two poles that most tabletop versions of Tetris fall between. Both involve dropping colored plastic tetrominos into a clear, vertical plastic “matrix” that represents the playing board. The key difference is that in Tetris Link, both players are dropping their tetrominos into the same matrix, while in the Strategy Game, each player (up to 4) gets their own.

Essentially, as I already mentioned, this means that the games take one of two basic forms. A variation on the gameplay of Connect Four, in which players compete within a shared matrix to try to both score their own points and thwart the other player, or competitive solitaire, in which each player plays their own tetrominos in their own matrix and simply competes to see who ends up with the higher score.

For almost as long as Tetris has been around, versions of it have been advanced allowing players to compete head-to-head, rather than playing against the computer. However, when I think of Tetris, that kind of competitive play is never what comes to mind. Perhaps that’s why the version of Tetris that works best for me, on the tabletop, is the competitive solitaire approach of games like the Tetris Strategy Game. 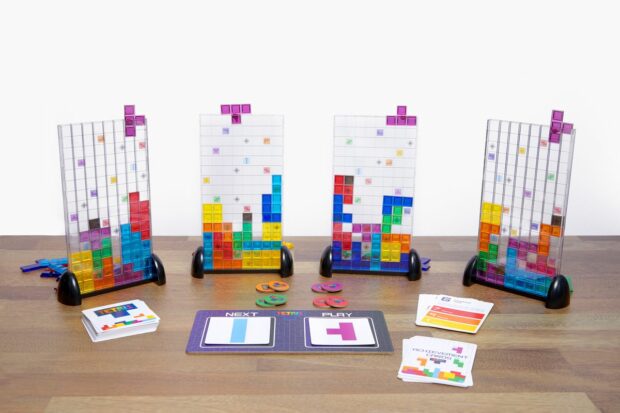 Released in 2021 by Buffalo Games, the Tetris Strategy Game (often styled simply as Tetris) plays in a fairly straightforward manner. There are a bunch of colorful plastic tetrominos that you all pull from, and you each get a matrix. Each turn, a card reveals what tetromino shape you have to play on that turn, and as the card that has to be played is shifted over to the current turn spot, the next card is revealed so, just like in the video game, you can plan your moves at least a little bit ahead.

You score points by completing rows and also by playing specific tetrominos in specific spots, which are marked on the back of the clear plastic matrix. Adding to the complexity, each matrix has different bonus spots. In its simplest form, play continues until you run out of cards for the next tetromino or all players complete six rows – with those who do so first scoring more points than those who come later.

However, to keep the game fresh, there are also several other variations available. Instead of playing the most basic game, you can choose to play a more advanced version in which two different win conditions are drawn at random from a deck of cards, which could include things like completing rows using a certain shape or, in one case, having one of each type of tetromino all touching the same side of your matrix. Players then race to complete those win conditions, much as they raced to complete six rows in the basic game.

Before I wrap up here, there’s one other thing that I need to mention about the Tetris Strategy Game. It’s a subject that I’ve tackled before in this column, because I think it’s a subject that’s important to talk about, especially in terms of the kinds of games I often cover here. The game insert that comes with the Tetris Strategy Game makes clever use of its space in order to store all of the game’s oddly-shaped pieces, even after everything has been unpacked and played with.

Once again, it may not seem like a big deal, but in a world filled with so many barriers to enjoying a good board game, finding one that’s easy to get out and put away is always a true pleasure, indeed.

I Miss The Adventures of Brisco County, Jr.