It too often seems like games are aimed at one demographic, one that craves hyper-masculine thrills that rely on heteronormative tropes. So what would a game that appeals to the queer community look like? While narrative games that deal with queer issues are an easy answer, there’s more to the queer community than our struggles or our pain. There’s an unashamed appreciation of the feminine, the celebration of creativity, the spirit of rebellion and even something as simple as the embrace of color. What’s more, these are traits that have always been a part of games whether people want to admit it or not. Sayonara Wild Hearts embodies all these qualities, proving to be a celebration of games throughout history that finds the queer energy in all of them.

You don’t get a ton of narrative in Sayonara Wild Hearts. What’s there involves major tarot arcana, chaos making deities fade and a woman with a broken heart being granted magical transformation powers. But these things merely set up the real point of the game, which is as a tone piece. Above all else, there’s a real feel of unbridled freedom and rebellion. That you spend most of your time on a motorcycle is not an accident. In the queer world, our very existence is an act of rebellion as society places constraints on who we really are. The ability to let loose and go wild is basically an analog for queer liberation, and it’s difficult to view Sayonara in any other light even given the superficial qualities of a game soaked in electronic pop music and charged with an undercurrent of neon rainbow tinges everywhere.

But the most notable quality that Sayonara possesses is its commitment to the feminine. It’s no secret that queer culture embraces the feminine more than heteronormative people, and Sayonara Wild Hearts is nothing if not a celebration of everything feminine in games. The main character is a woman, the songs are sung by a woman, but also the action is very choreographed and ballet-like. There’s a gracefulness to every action, further underscored by the first song in the game, the classical suite movement “Clair de Lune.” The feminization of everything is a big reason why Sayonara Wild Hearts holds so much queer energy as well, and it’s beautiful. 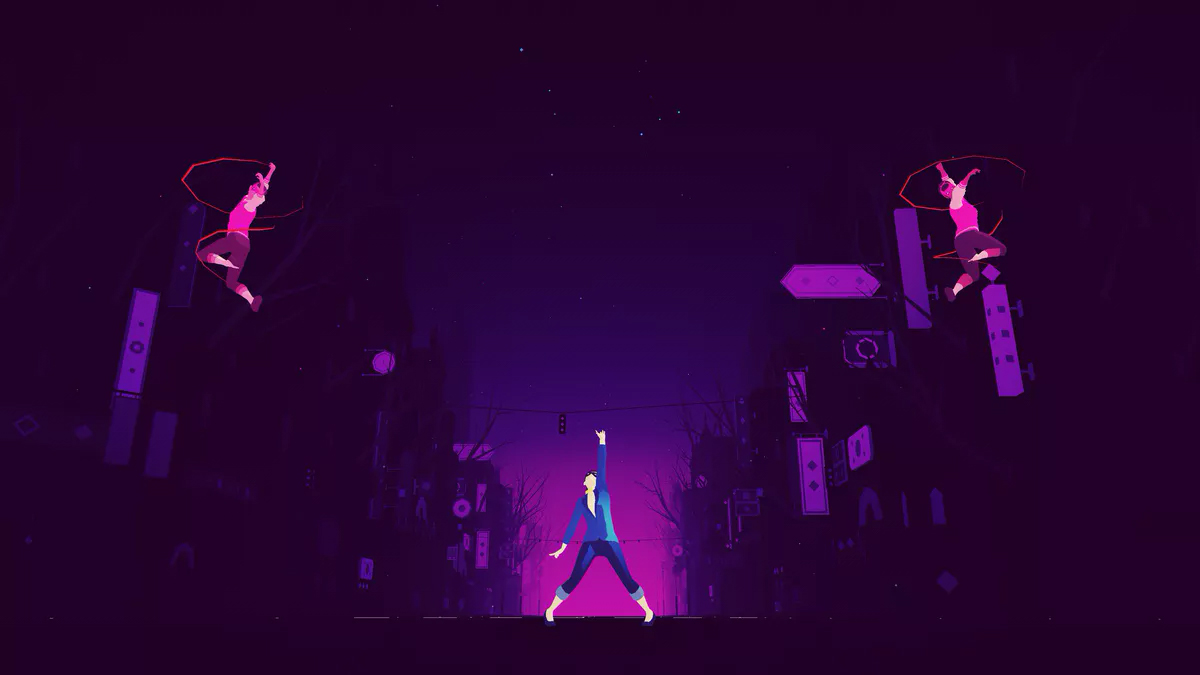 Sayonara Wild Hearts isn’t just a celebration of the feminine and queer, though. It’s a love letter to game genres across history. The game blends so many different components lifted from other game – the motorcycle sections are like a better version of Final Fantasy VII’s infamous motorcycle minigame, there’s quick time event-like prompts to the rhythm of the music, homages to both horizontal and vertical shoot-em-ups, a Panzer Dragoon-like section, car driving and even references to Tetris and wireframe graphics. Developer Simogo clearly has a deep fondness for and understanding of the medium.

What’s so extraordinary about this particular celebration of videogames, though, is that they’re all passed through a queer and feminine lens to show that not only are those concepts compatible with videogames, but that they thrive together and have always been a part of the medium despite what some gatekeepers would have you believe. The gracefulness of the narrative bits extends to the gameplay, making it feel more like a choreographed dance number than a score attack game. There’s a great deal of drama in Sayonara’s fly-by-the-seat-of-your-pants approach to gameplay design, and while it makes it a hard sell as a game you can get good at, it makes you feel powerful in a different way that most masculine-coded AAA games. Even when you’re not maximizing your score, the visuals and feedback still make you feel like you’re nailing the broad strokes and living up to the wild hearts in the game’s title. It also serves as the ultimate queer metaphor for being an imperfect mess and still being fabulous regardless.

All of these qualities are amazing and necessary in a culture that still has male incel gatekeepers trying to keep anyone not like them out of the medium when it’s this narrow view that proves wrong. Sayonara Wild Hearts shows exactly why by celebrating video games and showing everyone that they’ve always had an affinity for the feminine and queer. It’s why so many queer people – yes, including women – are attracted to games in the first place. No one can truly shackle us down. The wild hearts of the world stay wild regardless, something Sayonara Wild Hearts fully understands.

I Hope the FFVII Remake Changes My Mind
Previous Post

Cribbage With Grandpa and Dad