I feel like we toss around the phrase “They just don’t make ‘em like they used to” way, way too often in terms of just about every form of media or consumer product. Though in the case of a show like The Adventures of Brisco County, Jr. I’m inclined to agree. Because here’s the thing: while it may have lasted for a single 27-episode season, it deserved so much more than that. Also a warning: we’re going to be getting into spoilers so if you haven’t watched this show at all, I recommend you do that first.

The show began in 1993 and hit the ground running as an oddball homage to… well… westerns, obviously, but also period pieces, the turning of a new century, serialized adventures and even science fiction stories. It was a hodgepodge of a little bit of everything that went off the rails more than once (both figuratively and literally because of all the train hijinks), but it worked.  All the randomness, the bizarre situations, the quirky characters, the slapstick, everything – it managed to blend together to the point where even the idea of future technology from thousands of years in the future giving people super strength doesn’t feel out of place.

Bizarre, yes, but not out of place.

Revenge plots; the invention of denim; rocket engines; time travelers; a character that dies all the time but inexplicably never stays dead; musical numbers; gun fights; fist fights; an extremely smart horse. When I say this show had it all I am exaggerating, but not really that much? 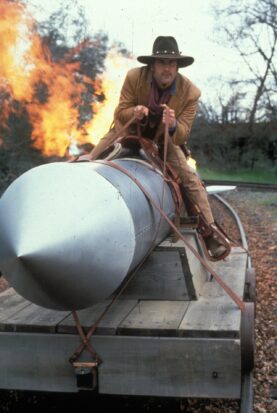 What held it all together was just how much fun everything was. The stories were interesting, even when they were weird or mundane. The characters, who were all played spectacularly by a rotating but also sometimes recurring ensemble cast, were always a treat. Episodes were broken up into chapters, almost like a classic adventure comic, complete with appropriate (and often pun-filled) titles. From start to finish the show gives off the impression that everyone involved – from the writers to the actors – had a blast making it.

And yet, it was canned after one season because it ultimately didn’t pull in enough viewers (according to Fox, anyway). Maybe things got a little too odd for some, maybe westerns just weren’t “hot” enough at the time, I dunno. Thankfully the primary story involving Brisco’s hunt for the man who killed his father did see a conclusion during its run time, but I wish we could have seen where things would have gone from there. Even if it took more of a “every episode is a self-contained story” approach like it did with the final few episodes of the season, it would have been a good time. I mean it worked for Futurama, right?

It’s hard to know for certain if a show like The Adventures of Brisco County, Jr. would do any better today, honestly. I want to believe that the historical (though not exactly accurate) setting and the general good guy takes on the bad guys theme would be enough to pique interest. Then the constant guessing at what could possibly happen next when we’ve already seen so much strangeness might keep people invested? Or maybe because we live in Hell World nobody would be interested in something “different” and ignore it in favor of overly familiar stuff like yet another live action Disney remake, I dunno.

Point is, The Adventures of Brisco County Jr. was an incredible show that really should have gotten more love in its heyday. Which, holy shit, was almost 30 years ago.

The Adventures of Brisco County Jr.

Beware of Falling Blocks: The Many Attempts to Translate Tetris to the Tabletop