On January 1, 1984, defenders of freedom worldwide breathed a collective sigh of relief when the morning sun dawned on a world mercifully devoid of Thought Police, Ministries of Love and Two Minutes Hates. Didn’t that sunrise mean we had avoided the grim prophecies in George Orwell’s 1984, that his prophetic novel was proven wrong?

But 1984 was not the year to relax our vigil against the Communist threat. Even 29 years later, in 2013, when the Soviet Union is a memory and Russia allied with the West – even now, the Soviet threat is not without weapons. No, I’m not talking about the atomic bomb – I’m not even talking about Hollywood. No, Communism’s deadliest weapon is a computer program, a seemingly innocuous little game. What it lacks in explosive yield or razzle-dazzle it makes up for in soul-sucking, time-wasting, all-pervasive brain death.

I am, of course, referring to Tetris.

The great big Tetris board called Earth was starting to get dangerously full. And all of the pieces were red.

In the year 1984, Soviet computer scientist Alexey Pajitnov created a computer program based on a children’s game called tetrominoes. All work was allegedly done in Pajitnov’s spare time, without the Communist government’s explicit knowledge or approval. Even if that were the case, it wasn’t long before the Soviet Union got its hands on Pajitnov’s program and in 1985 began distributing it throughout the state.

By 1986 the “game” had reached Budapest, Hungary, where a British software developer named Robert Stein conveniently stumbled across it. Was he a Soviet spy, a plant destined to become the doorway through which Tetris penetrated the Iron Curtain and infected the free world? Or was he merely Tetris’ first victim, an innocent capitalist mesmerized by the falling shapes and shrinking spaces? Whatever the case, Stein was desperate for Tetris and the Hungarians were desperate to give it to him. Despite a professed intention to contact Pajitnov to secure rights for the “game,” Stein sold Tetris to software company Mirrorsoft UK and its USA affiliate, Spectrum Holobyte.

Stein’s intentions may seem pure – on the surface, his mercenary capitalism is the essence of freedom and the longstanding American tradition of intellectual property theft – but let’s dig a little deeper. What is the one way to get good, honest, hard-working Americans to accept a “game” so obviously created for devious Soviet purposes? An aggressive marketing campaign, of course! When Stein broached legal, capitalist-sanctioned paths to acquiring the rights to Tetris, the Soviet Union hemmed and hawed, pretending to misunderstand the free market which they were so deviously corrupting. Eventually, Stein went over the U.S.S.R.’s head and marketed Tetris without the Soviets’ approval, pretending he’d acquired it from the Hungarian programmers from whom he’d first learned about it.  Thus Tetris passed through the Iron Curtain allegedly without Soviet knowledge or approval. 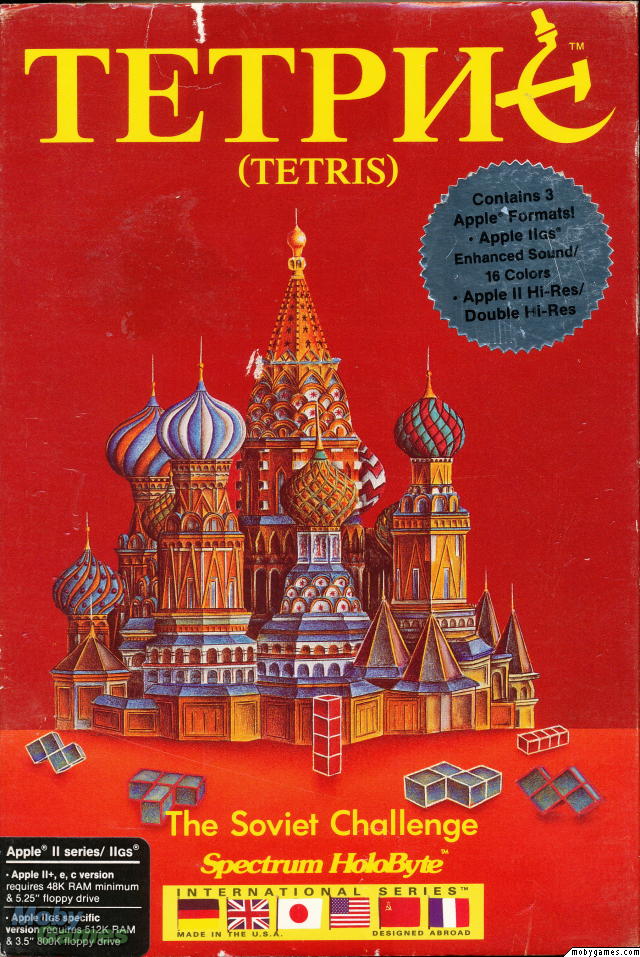 By 1988, Tetris was the highest-selling computer game in the U.S., available for purchase on the Commodore 64, Super Famicom, and Apple II and IBM personal computers. The question of who owned the rights – and on which devices – was still hotly contested, particularly between Atari, who acquired it from Microsoft, and Nintendo, who acquired it through Spectrum Holobyte and began distributing it through a publisher named – if you can believe it – Bullet Proof Software. Coincidence? Perhaps. In any case, Bullet Proof worked hard to secure the rights to Tetris across multiple devices. They were hoping to prepackage the insidious little game with their upcoming portable handheld console, called a Game Boy. Facilitated by this little machine, Tetris would grow even further, spreading beyond the arcades, living rooms and office cubicles where it was once constrained. The great big Tetris board called Earth was starting to get dangerously full. And all of the pieces were red.

President Reagan sought to fight Communism with his “Star Wars” initiative, but the Soviet Union countered with a gambit out of Star Trek, a Kobayashi Maru that we were never meant to solve. An unbeatable scenario whose purpose was not to teach us, but to leach us, to drain us dry of enterprise and rational thought, to strand us in a wasteland of wasted hours.

Reagan’s presidency ended in 1989. That May, the magazine USA Today featured a full-page ad for Tetris, entitled “The Soviet Mind Game.” The Soviet Union was finally dissolved in 1992, just one year before the ongoing legal battle between Nintendo and Atari finally ceased. By that time, Tetris had spread far beyond any one company’s reach. Even today, thousands of versions of Tetris lie dormant in warehouses or unaccounted for in our very homes.

Today, Tetris remains one of the most played videogames, and one of the least understood. What Freudian death wish compels us to waste countless hours playing an unwinnable game? And what insidious purpose did the Soviet Union have in unleashing it upon us?

My fellow bored, electronically over-equipped Americans, play Solitaire. Play Angry Birds. Play Snake, for God’s sake. But do not, for all that is good and holy and American, play Tetris. Don’t let your loved ones play it. Wipe your hard drives clean of it. Because we can win the space race, the arms race, the war for freedom. But Tetris is one game we cannot win.

You Can’t Always Get What You Want