The Museum of Modern Art wants you to play Canabalt with a mouse. I don’t even think that’s even possible outside of the museum’s Applied Design exhibition. It’s a little weird, yet Canabalt’s mouse controller is just one example of how the show’s curator Paola Antonelli has attempted to change up the way gamers think about interacting with their favorite games.

The curation of playable video games is a relatively new challenge for museums. MoMA’s Applied Design exhibition isn’t a video game show, but it does feature 14 recently acquired video games, most of which are playable on site.

The exhibition includes these games as prominent examples of “interaction design,” the dynamic between physical player controls and in-game actions. As such, the games are presented with minimal flair to emphasize interactivity above historical context or nostalgic significance. In a bold experiment, MoMA has altered the traditionally accepted control interfaces for several games in their show (Canabalt is only one of them). 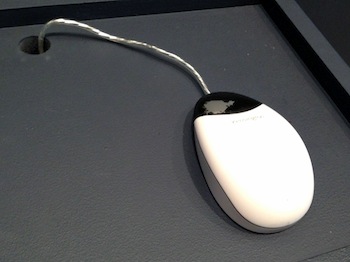 As someone who had played most of Applied Design’s games prior to visiting the show, the differences stood out prominently and prompted me to reflect on the nature of controllers in general, though I imagine an uninitiated player would barely notice.

Some of the alterations were successful in getting me to think reflexively about what I was actually doing when I played the games. Other curatorial decisions in Applied Design work better in concept than execution.

There is no definitive answer for how much emphasis to place on peripherals in video game installations, which justifies MoMA’s varied approach in Applied Design. Modify controls too radically and the exhibition becomes one about interface design, not game design; leave controls totally unchanged and you miss an opportunity to reflect on the controller as the often-overlooked component of game design that it is. Applied Design finds something of a middle ground by changing some games’ controls more than others.

Games that take place in three-dimensional spaces are installed with standard, dual-thumbstick controllers, while most of the two-dimensional titles have custom joysticks and buttons built into platforms installed just below their display screens. And yes, the one-button endless runner, Canabalt, is set up with a mouse.

While it works just fine to play Canabalt with a mouse, it certainly is unusual. The mouse on display only has one button, which is all Canabalt requires, so there’s no confusion about what to press. However, there’s no in-game reason to move the mouse around since there is no cursor. I suppose a mouse is an ambidextrous peripheral, allowing players to position it wherever is most comfortable, but this functionality is a bit superfluous here. 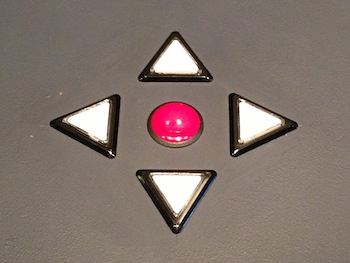 Also, depending on how tall you are, grasping the mouse can actually be slightly uncomfortable, requiring a cramped bend at the wrist to use. I’d have liked to see a large button that I could slam with my entire hand, as if flattening out pizza dough. It seems like that could have served the same purpose and avoided unused functionality.

Also strange is how Canabalt’s mouse button and some of the modern controllers are coated in a thin layer of rubbery plastic. Kate Carmody, the exhibition’s curatorial assistant, claims this move is meant to defamiliarize controllers from the nostalgic memories of longtime players like myself, though again, non-gamers will likely not notice anything unusual.

In practice, the encasement did push me to give these controllers a second look, but not because anything had changed significantly about my recognition of the controller or my ability to play the games. Rather it was hard to ignore how the plastic had begun to peel off from overuse. As a result, my mind wandered away from the heady realm of interaction design and into the banal sewers of exhibition maintenance.

Intentional or not, the weathered controllers do offer an instantly understandable visualization of how previous players held and used them. The handles, scraped bare of the black rubber, are clearly outlined as high-friction areas. A burst of gray breaks through the mouse button’s tacky cover from excessive finger taps. It’s as if museum visitors took to the controllers like scratch-off lottery tickets, leaving a clearly identifiable trace of their actions.

Even though the distressed look of the controllers illustrates human-to-video game interactivity, a concept that is rarely successfully visualized, it also makes it apparent just how many people are wrapping their mitts around these peripherals and the notable lack of hand sanitizer dispensers on-site. 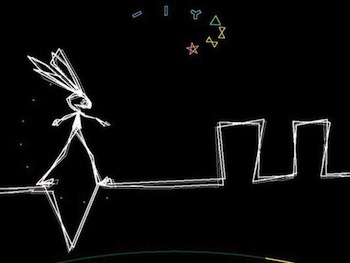 Unfortunately, due to some other technical issues I ran into during my visit to Applied Design, the notion of the peeling rubber coating as a profound example of human trace feels unintentional. Neither the controllers for flOw nor Katamari Damacy worked at all.

Additionally, the button layouts for Vib-Ribbon and Another World differed from the instructional wall placards, forcing me to figure out the control schemes through trial and error. These problems may come with the territory when bringing consumer-grade equipment into a more industrial environment, but they are seemingly reversible maintenance concerns that prevented me from fully engaging with the video games as pure interaction design showpieces.

Elsewhere, MoMA sidesteps these problems by outfitting several of their games with a more durable, arcade-like interface, built to be played standing up using traditional buttons and joysticks. For a game like Pac-Man, this is the ideal arrangement.

The springiness and responsiveness of the joystick suitably compliments the timing required in the game, and the installation physically replicates the original form of an arcade cabinet, albeit stripped of eccentricities and quarter slots. While a high score champion could probably tell you why the setup is not “arcade perfect,” it does the job just fine.

I found the button layout for Tetris to be the most foreign of the bunch: four directional arrows arranged around a red circle. I’ve played a lot of Tetris on the NES and Game Boy where the entire game is essentially managed by the left thumb pad, but Applied Design’s unusual controls and older-than-old-school monochrome display forced me to reeducate myself and adapt to this specific interface. While the Tetris‘ controls presented in the exhibition are intuitively understandable, they’re atypical for anyone previously familiar with the game. 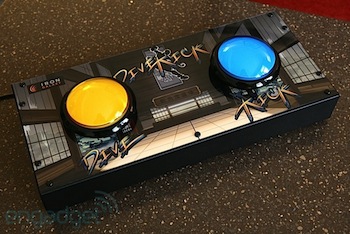 It’s strange that MoMA chose Tetris to be the only game in Applied Design that thoroughly defies control expectations, making their specific Tetris experience unique, but also an outlier in the exhibition.

On the upside, having big, separate buttons for each direction makes inputting them feel more deliberate, like I was controlling a mechanical arm in a warehouse as if it were an oversized crane machine. Even though it’s no Divekick rig, fat arrow buttons are just satisfying to press. There’s no better example in Applied Design of control interface as its own form of play than the way MoMA chose to present Tetris.

For better or worse, the liberties MoMA’s curatorial team took with the controllers in their exhibition vary game to game, making the whole endeavor feel a bit experimental. I appreciate the attempts to shake up the prescribed control schemes; it gave me a reason to play games in the exhibition that I could have just as easily booted up in my living room.

Though part of me longs for the grand spectacle of The Art of Video Games’ oversized arcade “cabinet” projections at the Smithsonian, I accept that MoMA’s more clinical approach better fits games in the context of other kinds of objects, lest we forget that Applied Design is an exhibition with video games in it, not a video game show.

Dan Solberg often talks about the mystical connections between art and games on Twitter @Dan_Solberg.