This feature is a reprint from Unwinnable Monthly #141. If you like what you see, grab the magazine for less than ten dollars, or subscribe and get all future magazines for half price. 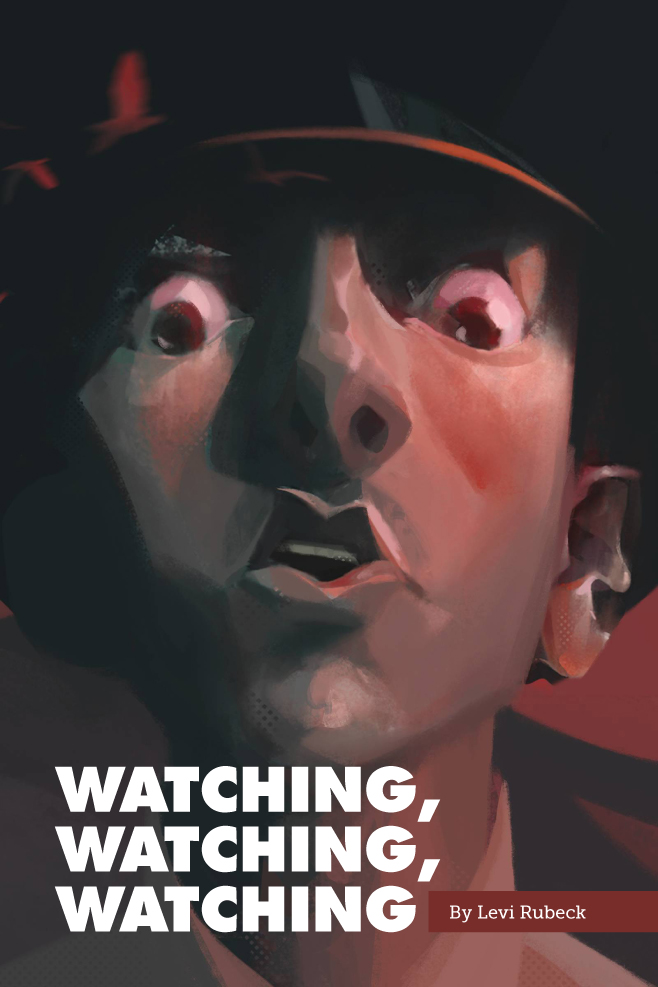 A common dismissive quip for videogames is that they’re simply power fantasies, vacuous beyond a desire to enact one’s rage against a world that affords no quarter. But power and fantasy are sold in many flavors to slake many thirsts, one of which is to grasp a sliver of autonomy from a system built to oppress with little reason or explanation. Such systems are often so vast and insidious so as to defy easy mental visualization, man-made Lovecraftian horrors that exist beyond the capacity of our feeble brains to even attempt to comprehend. Such is the use of metaphor, to cast the forces that tyrannize people so we can better understand and organize against their seemingly eldritch evil.

This is the beauty of TALLBOYS games’ upcoming narrative escape game Militsioner – where the player is desperate to escape a giant policeman who sees nearly everything and refuses to directly answer your pleas for an answer as to why you’re constantly being plucked into the sky. But we’ve had enough of that crap, and we’re looking to skip town however we can. This first-person game has you exploring an entire sandbox of gossipy neighbors, meandering paths, and vehicles to hop to find a route out that won’t make the policeman angry or get you swept up in his giant hand and sent to jail. He’s the clear-cut image of overwhelming authority, just kickin’ it criss-cross-apple-sauce in the center of town peeping on everyone as they’re trying to go about their day. 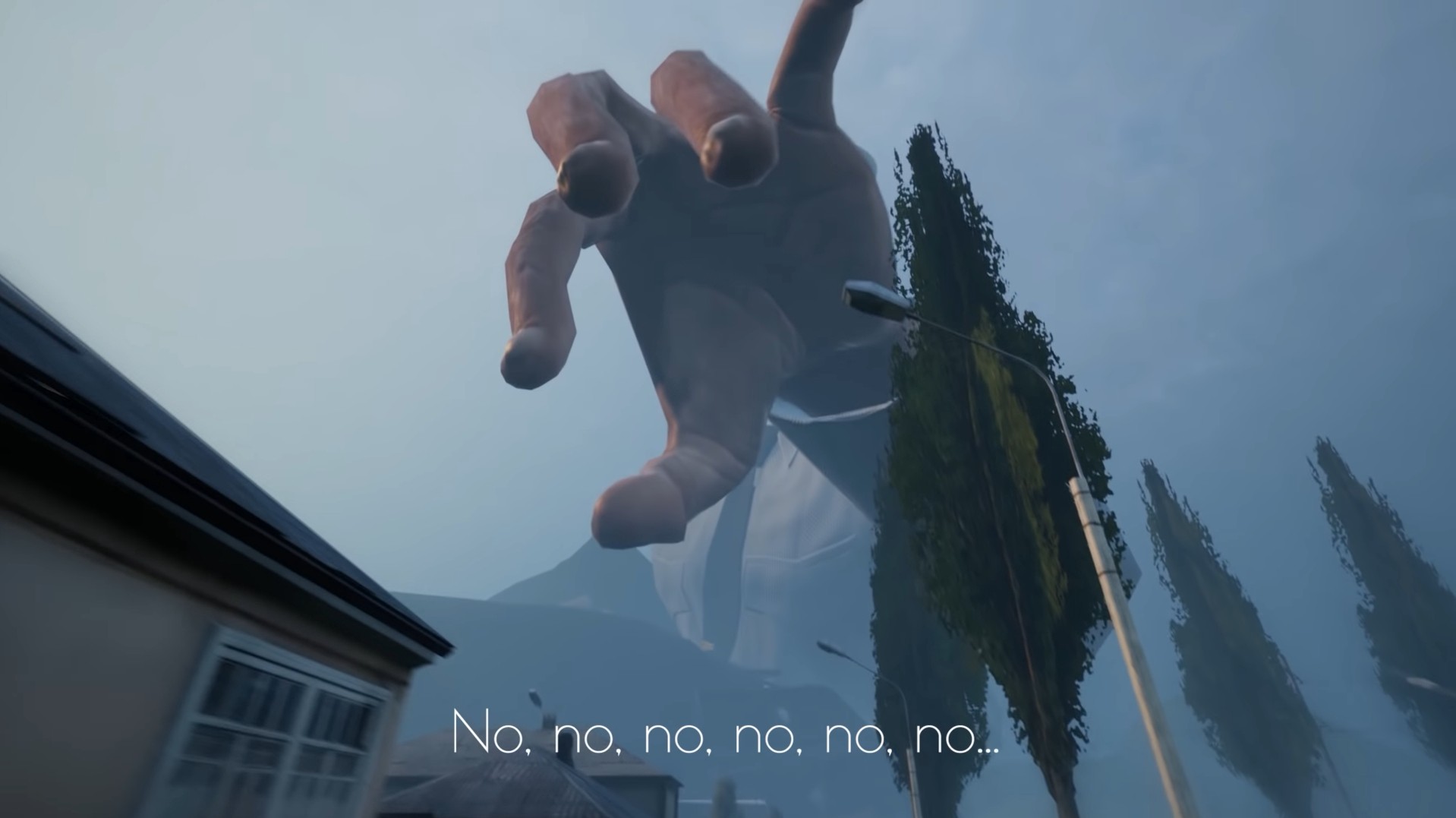 Talking with a couple of the TALLBOYS team members working on Militsonier, it’s clear that this is an attempt to directly address what they see as a kind of stagnation within their homeland of Russia. Dmitry Shevchenko (Studio Director/Game Designer) explains: “‘Militsioner’ is the name for a policeman in the USSR, which was changed to ‘Policeman’ only in 2011, already in modern Russia. But the term is still used in everyday life, despite its anachronism. Despite the difficulty of adaptation and translation, we decided to leave the old name behind to convey the idea of stagnation in the country.” Daring to attempt even this grey-shaded view has already gotten the team some heat in their home town as reported by Polygon, but it’s clear that TALLBOYS are pushing their art in a more nuanced direction than just “police = bad.” In many ways this is a game about forging one’s own path, grasping at self-determination and the personal toll of just growing up and trying to escape one’s birthplace.

But growing up doesn’t mean merely casting away everything that came before, on both a personal and societal level. While TALLBOYS are confronting the stagnation they see in Russia, they’re drawing from its history as they work to establish its future. This comes from, in part, a popular series of Russian children’s poems from the mid-20th century about Uncle Styopa, a man so tall he is nicknamed “Fire Tower.” Uncle Styopa goes on a few different adventures, all meant to entertain and delight children, not the least of which is when he joins the military. As Art Director/Game Designer Vladimir Semenets describes, “We were wondering how we can portray this iconic to Russia image of a giant policeman now. His height and profession are where the similarities end though.” This is where TALLBOYS turns toward their more contemporary inspirations, from the color palette and surreal tension of Inside to Vladimir’s favorite game Shadow of the Colossus, with its own hulking obstacles. Militsonier won’t have you climbing the policeman though, they’re pushing towards something more negotiable. 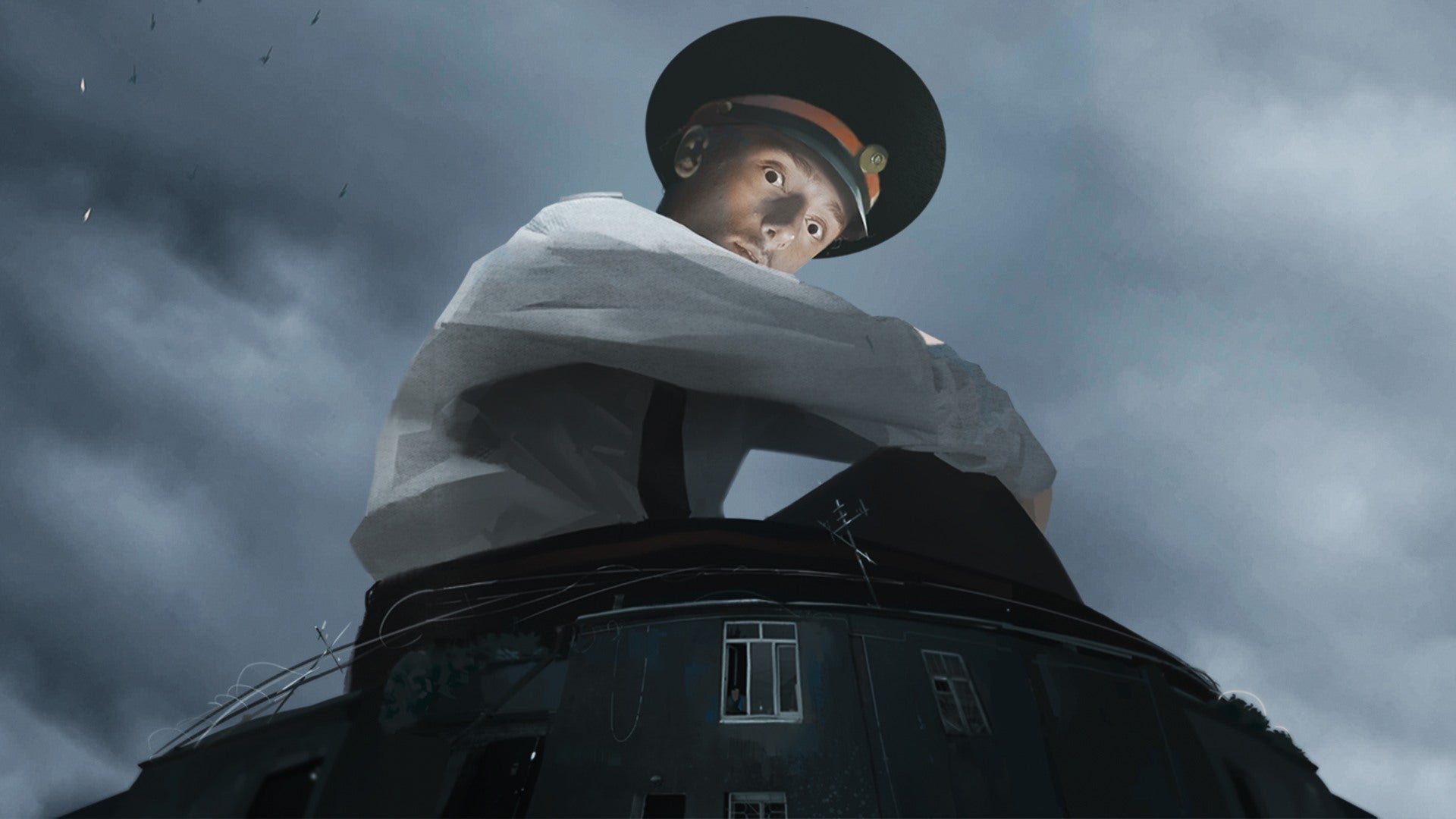 Vladimir explains that since they weren’t looking for the player to interact with the policeman physically, they had to find another angle. “Our recent decision was to integrate some mechanics from the dating sim genre, where the player’s actions cause different emotional reactions from the policeman. For example, by making him angry the player risks prison. So, in order to escape successfully, the player will need to play around the policeman’s different moods. It’s basically a dating sim where instead of a romantic relationship you can end up in jail.” Early on in development TALLBOYS had the idea to incorporate voice control for interactions with the giant policeman, but they were wary of the difficulty of such an approach. But after the success of ghost-hunting sim Phasmophobia, which has the player use their computer’s microphone to speak to the ghosts and who will also listen to your conversations with teammates and mock you throughout a match, TALLBOYS screwed up the courage to implement a similar feature. The player must talk with the police officer, keeping him appeased and being careful not to upset him with curses or insults.

This conversational dynamic, the dating sim-esque way of empathizing with someone in order to better understand what motivates them, has the potential to really set Militsonier apart from the expanding force of videogame power fantasies. TALLBOYS understands that the violence of the system, AKA their giant policeman, cannot be matched by an individual, and perhaps even if it could the utility would be limited and the consequences enormous. Vladimir himself sums up the team’s goals to me: “An important part of the experience is the pressure, the feeling of being tracked. But still, I would like the game to slow down with more understandable quiet moments. I’d like it to be a more bittersweet feeling. It’s a story about escape, and in any good escape story, you leave something behind, in our case, your hometown.” Freedom from oppression comes with a cost and is rarely easy, but as they say, nothing worth the while ever is.

Levi Rubeck is a is a critic and poet currently living in the Boston area. Check his links at levirubeck.com