My favorite videogame right now isn’t a videogame at all.
Sure, it’s an accessory to a game in a way, and it has some game-like elements of its own. You assemble a list of players to add to your party, each decision you make gets graded and your goal is to get the highest cumulative score possible. There’s a loot box-style mechanic underpinning its design too, like a slot machine where the user has some ability to impact outcomes. And those outcomes are different every time, encouraging you to play just one more round to rectify past mistakes.

I’m talking about Pro Football Focus’s NFL Mock Draft Simulator and, for reasons I’m not sure I understand, it has become my ultimate time-wasting mobile idle game. In fact, if you put this free browser-based app in a box, sold it for $70 and made it a next-gen console exclusive, I’d be opening my wallet and dropping $1,000 on a scalped PS5 right now.

This is mentally unwell behavior, but I’m going to try to unpack my fascination with it anyway.

As their name implies, mock draft simulators take real-world collegiate prospects for a professional sport and then project which teams will take which players in each round of that league’s respective draft (for the NFL, this starts at the end of April). Each player is ranked according to data gathered by whichever organization’s simulator you’re using (there are several out there for each major sport). Users can select a team to control, adjust parameters, and then make their picks. A single round takes about five minutes.

Typically, draft simulators are made for sports analysts to work out hypothetical scenarios in their pre-draft coverage. Hitting on more than a handful of correct picks is rare, but they can make for interesting intellectual exercises (although the words “interesting” and “intellectual” are doing a lot of work here), and they drive clicks from bored fans in the off-season, who often (correctly) call them a waste of time but read anyway.

I’m not a sportswriter, I have zero professional reason to use this tool and I’m not playing around with it to create any kind of content (aside from this column). I also haven’t played a competitive sport since middle school and I’d probably blow both knees out just stepping onto a football field. I’m a fan and I’m using it for the exact opposite of productivity (if you can call mock drafting productive in any sense).

So, why have I spent at least a hundred rounds on this thing, testing different strategies and approaches to prioritizing players and position groups, all of which will be rendered irrelevant after the actual draft concludes? The easy answer is because my brain is broken. That was true before a global pandemic lowered the bar for the things I’ll pass off as entertainment, but after months of living under the persistent stress of a global pandemic, it’s even more true now. 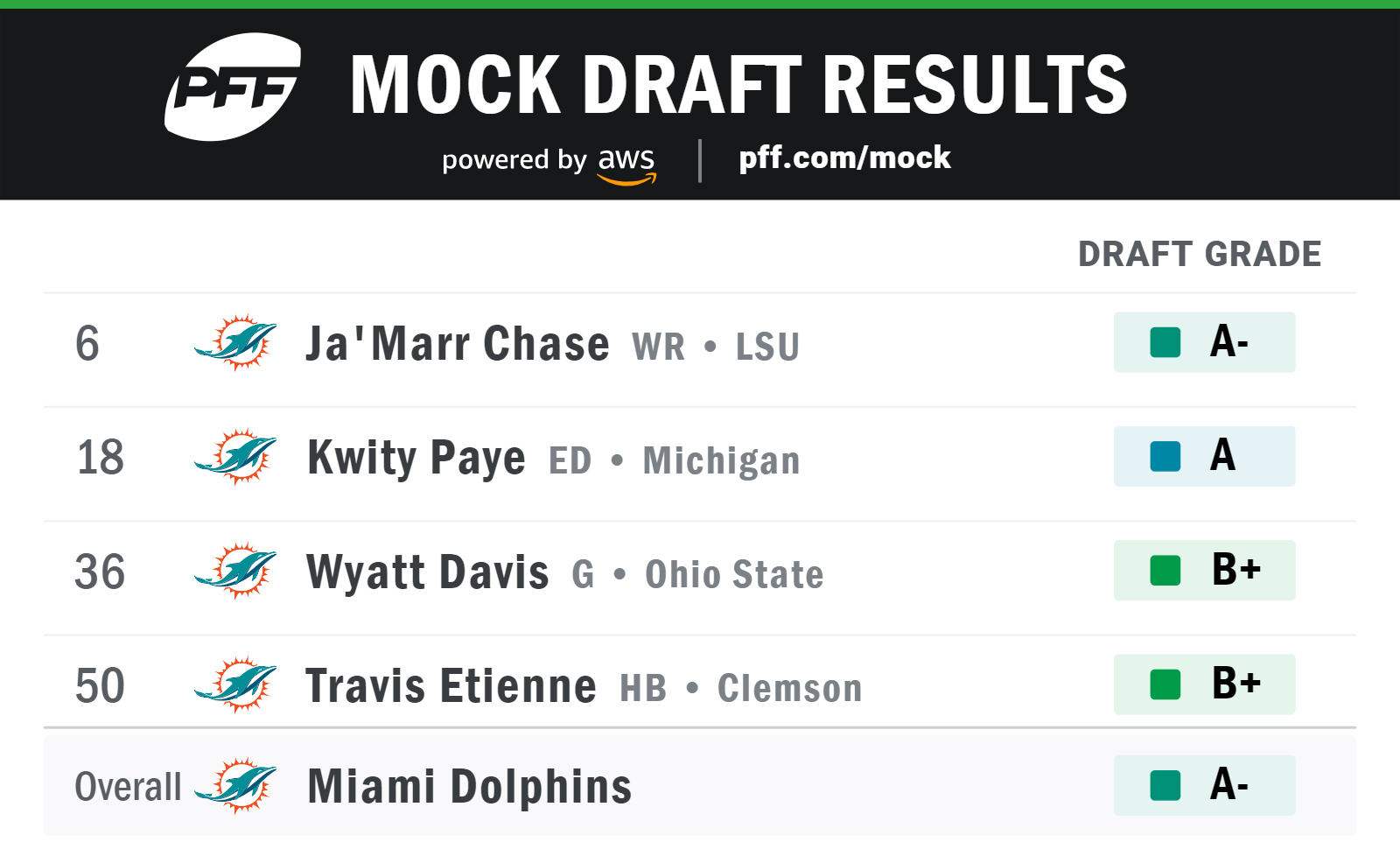 A better and (hopefully) more interesting answer, though, might have something to do with some deeper psychology. I’m not claiming I understand that psychology, mind you, but a psychologist could probably read this and tell me a few things I need to work on.

I look forward to the NFL draft the way kids look forward to getting gifts for the holidays. It kicks off with an hours-long televised event that, even to most diehard fans, isn’t worth watching all the way through (or at all). Like most triple-A videogames, it’s a big-budget drama peddled by a problematic corporation that I give my time and money even though I know I probably shouldn’t. The suspense always sucks me in, even if it can get boring after the initial drama and hype washes away (unless your favorite team does something stupid, in which case, the drama can last for months on Twitter).

There’s something captivating about seeing which players will go to which teams and witnessing the raw displays of emotion when they realize their hopes and dreams. Most of these players won’t be good right away, or potentially, ever at all. Yet fans often hype the whole deal like it’s going to immediately make or break their team’s fortunes, and the sense of hope that surrounds a strong draft (or doom that permeates one perceived to be bad), is infectious. It’s an emotional rollercoaster and we strap in for the ride even though there’s nothing we can do directly to affect the outcome.

Mock draft simulators give us some sense of control and an ability to look at our favorite team and say, “I could do better than this!” For the record, I could not do better than my favorite team. Nor could anyone else playing with a free simulator. I have less than no idea what I’m doing and yet it gives me an intoxicating sense of unearned confidence that I could crush a draft while millions of people obsess over each decision I’d make.

Yet given the last year we’ve all had, there’s something comforting about getting some sense of certainty about the future, even if it’s an illusion. The fact that entire professional sports seasons were played during a global pandemic and weren’t an unmitigated catastrophe remains both 1) mind-blowingly weird to the extent that I’ll be telling my grandkids about it and 2) a rare bright spot during an otherwise brutal time (and for players in many leagues, it was brutal and not exactly an escape).

Even with most aspects of “normalcy” stripped away, sports were one thing we got to keep. Maybe that’s why, now more than ever, they have such a hold on my attention; there have been fewer other distractions competing with them for my attention. And maybe that partially explains why something that offers a temporary sense of being able to control the uncontrollable has become such a calming timewaster. It fills a need to unwind like any simple videogame might. And maybe that isn’t so weird at all.

Gonzo The Great and the Artistic Struggle