This feature is a reprint from Unwinnable Monthly #118. If you like what you see, grab the magazine for less than ten dollars, or subscribe and get all future magazines for half price.

Ask anyone who’s been around long enough which sports videogames they consider to be the best of all time and there are a handful of responses you’re likely to hear. NBA Jam, Ken Griffey Jr. Presents Major League Baseball, John Madden Football ‘ 92, and Blades of Steel are popular picks, as are cult classics like NFL 2K5 and FIFA ‘98. If there’s one historic title that reigns above the rest in terms of raw staying power though, it might be Tecmo Super Bowl on the original NES. The 8-bit football franchise is so iconic, it was even featured prominently in Kia commercials a few years ago, something that would have been unthinkable in 1991 but speaks to the game’s status as a cultural touchstone for a generation.

Today, an active competitive scene keeps the game alive, convening each year at Tecmo Madison (which claims to be the largest Tecmo Super Bowl tournament in the world). It has also been one of my favorite games ever since I first rented it as a kid and, thanks to the dedicated ROM hacking community that updates the game’s rosters every year, playing through a season of the latest Tecmo 2K has become a personal annual tradition. So, when I saw there was a tournament happening in my city, I knew my plans that weekend were set. And after I left, I felt like I finally understood why I (and others) love this deceptively simplistic and primitively pixelated rendition of gridiron greatness so much.

When I first showed up at the hotel convention center where the tournament was held as part of a retro videogame flea market, I slowly made my way toward a back row of CRT monitors and consoles, each hooked up with the best damn arcade football game ever made. An enthusiastic day drinking dude in a vintage Barry Sanders jersey (a star running back for the Detroit Lions and one of the best players in the original version of Tecmo Super Bowl) made a warm introduction and took my registration fee. I wasn’t sure exactly who or what I was going to find, but I quickly felt assured I was among my people here. 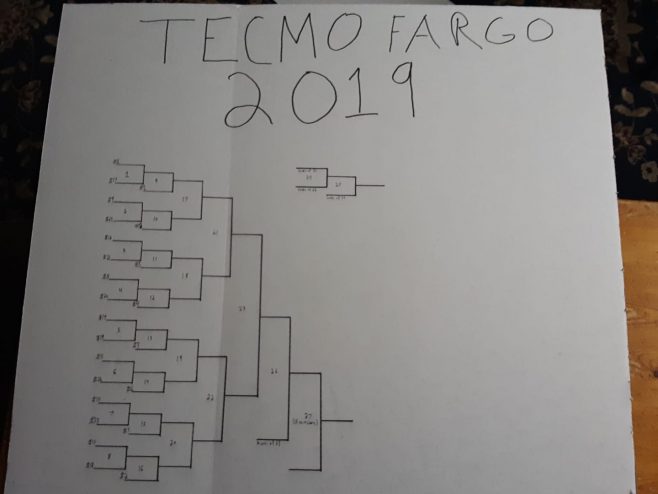 However, it was around this time that it dawned on me that I should have practiced before the tournament. I hadn’t played the game at all in a while, and not against another person since I was a kid (and even then, I usually played against my dad, and he usually let me win). Those concerns were put to rest though when I saw the tournament bracket was scrawled in black sharpie on a piece of cardboard taped to the wall; this was clearly all for fun, exactly how it should be.

However, it was around this time that it dawned on me that I should have practiced before the tournament.

The rules for the tournament were simple; Player 1 picks the match-up, while Player 2 picks which team they want to take from that pairing. Smart strategy here requires some knowledge of which teams were good back in 1991 and a little bit of psychology to try to guess which team your opponent is likely to pick. Each player was guaranteed to play a minimum of four games, all of which I lost, including a particularly devastating 31-3 blowout where my Houston Oilers-equipped opponent sent the Pittsburgh Steelers straight to virtual football hell.

Throughout the whole tournament though, every other competitor was super kind and more than willing to share tips on what makes competitive Tecmo tick. Fumbles can happen any time, so run out of bounds on long gains. The health condition of your players matters too, so keep an eye on it. Know who the best defensive player is on every team, and take control of that guy to maximize stops. Each team has a unique playbook too, and you should customize it before the game starts.

In coming to understand those nuances, the real brilliance of the game’s design started to click. Back in the mid-1980s, the original Apple II version of Madden almost never came out because making the game both fun and realistic on basic hardware was too challenging. Tecmo Super Bowl (and its predecessor, the more simply titled Tecmo Bowl) avoided this trap by focusing on being enjoyable to play as a videogame first, putting the player in position to have a direct impact on every play and without needing to learn an unnecessarily complicated control setup. With the two-button NES controller, it made videogame football more engaging than PC developers were able to manage with access to a full keyboard.

Yet, while it’s a textbook example of the “easy to pick up, difficult to master” mantra, playing at a high level takes patience and skill. The closest comparison to another competitive series might be Street Fighter; the basic move set may be limited, but what you can do within its constraints quickly become complex. And just as fighting games require a working knowledge of all the possible match-ups between fighters, success at competitive Tecmo Super Bowl requires knowledge of all 28 teams, since you can’t always pick who you want. PvP games are match-ups of raw skill and, like any decent fighting game, there’s little chance for a bad player to accidentally pull out a win without a solid game plan.

While each new Madden generally gets forgotten by the time next year’s entry comes out, Tecmo Super Bowl stays more or less the same, as close to a pure distillation of competitive spirit as videogame football has ever achieved. It’s a classic case of its creators working within limitations to produce something undeniably pure, turning a rudimentary control scheme, narrow color palette and tinny sound chip into something that cuts to the core of what makes competitive sports gaming addictive. It leaves you feeling like you can be victorious if you can get just one more shot at winning forever, or at least until the contacts on those beer-soaked cartridges finally hit the showers.